Out Of The Cave: Sunshine, Blue Skies, Argenta Market and the River Trail

After an Arctic cold wave and a huge snow dump brought must of Arkansas to a sliding halt, Saturday broke clear and warm. No matter how much fun was had in the snow, the change in the weather was greeted in a celebratory manner by those of us who take our recreation in the outdoors. The set-up was perfect for sleeping in and enjoying a little breakfast while watching the mercury rise in preparation for a ride. 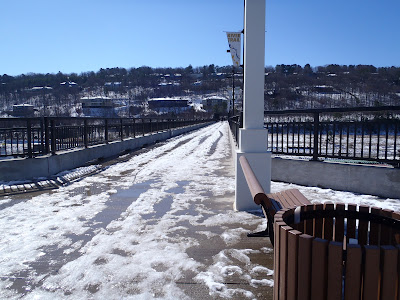 Even as temperatures rose past 50, the BDB still had enough snow and ice cover to require this road bike rider to dismount and walk when I passed over around 11:00AM. 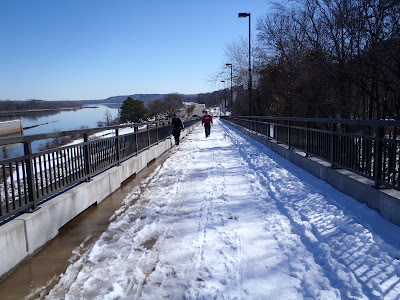 The Little Rock ramp stays in shadow most of the day and the snow was still plenty deep.
Diane and I rode from the house together with her heading to an Argenta area yoga session while I headed out to scout conditions on the trail. It was mostly dry, but anywhere that stayed in shadow most of the day still had ice and snow cover, though the rising temperatures and bright sun were soon having their way with even the most stubborn ice holes. After a loop through downtown, I headed to the Argenta Market for a snack and to meet up with Diane for a bride ride*. 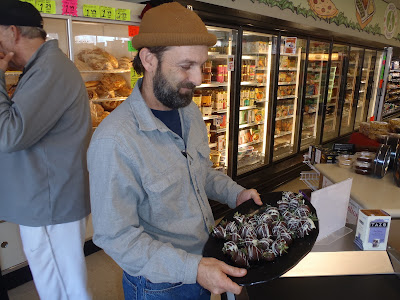 Jody Hardin of Argenta Market handed out a few samples of  these chocolate covered strawberries. 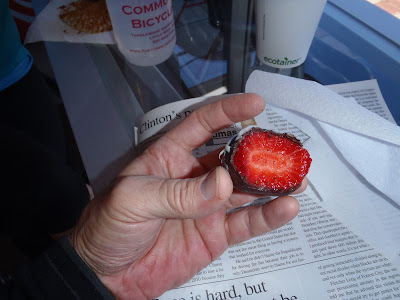 Mmmmmmm... Just the thing to chase my store-made pig-in-a-blanket and doughnut from Community Bakery. 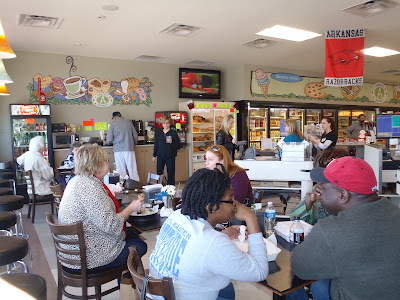 The Argenta Market always has a good vibe, especially on Saturday when folks have time relax. There is always plenty of easy conversation among diners, shoppers, and store staff. 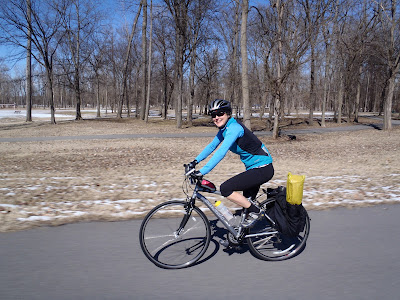 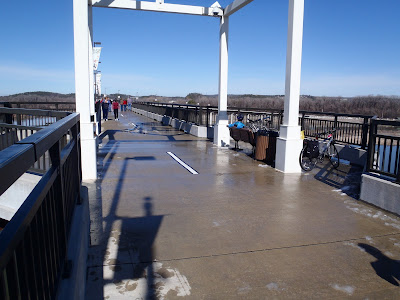 What a difference a couple of hours of sunshine can make! 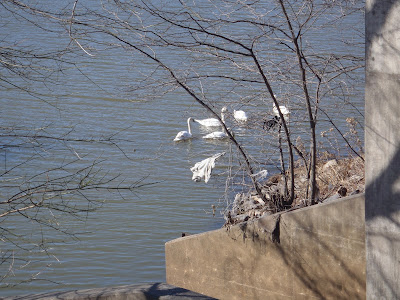 If you're a birder, you can likely add Trumpeter Swans to your list. These guys were spotted along River Front Park in downtown NLR. The swan population at Magness Lake near Heber Springs gets a lot of publicity, but they're not the only show around.
If you're reading this on Sunday morning, it is time to back away from the computer, air up your tires and hit the road! Head out to the River Trail or your local road or single-track. You need the vitamin D.
*Bride ride: a ride with one's spouse on which leisurely speeds are anticipated and not whined about.
﻿
Posted by JBar at 11:13 AM