I threw my mountain bike in the truck Thursday afternoon and headed to the Big Dam Bridge. I hadn't been out on the road after the big snow and was getting a little stir crazy. On arrival, I decided to leave the bike in the truck because I didn't have a lot of time and I could see right away that I was going to get soaked where the snow was melting and probably bust my ass where it wasn't. I opted to take a little walk and get a few photos. 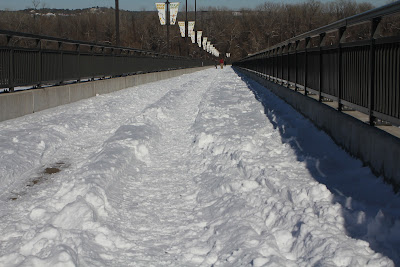 This is the north ramp. The four-wheelers obviously couldn't resist the temptation. 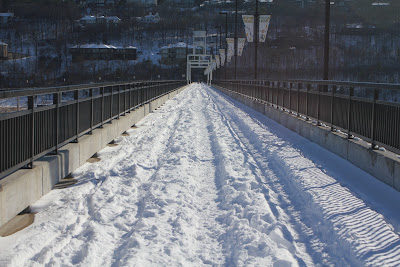 There were a few walkers out and about and I saw a couple of the bike nerd crew on mtbs as I arrived. Good sense is not a requisite to be a BN boy. 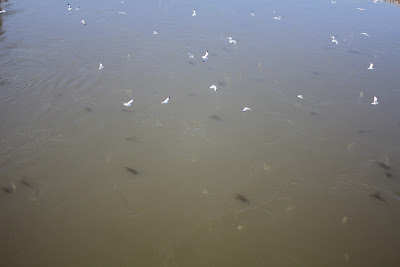 The gulls have been busy below the dam with large numbers observed in flight and rafted up on the river. I've speculated that a shad kill has been underway, providing the birds with the equivalent of an all-you-can-eat fish buffet. 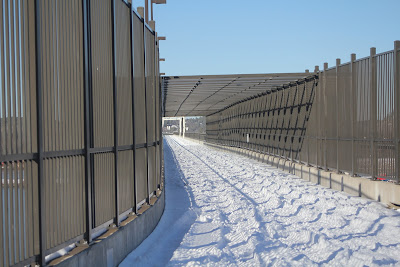 The shadows and the cage over the navigation gates and lock makes for some interesting geometry. 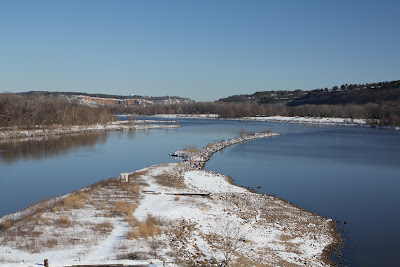 Sunny skies had melted a lot of the snow off of dark surfaces in spite of the cold temperatures but the snow cover still marked the landscape. This view is beautiful no matter the conditions.
Not a whole lot of story here, but I hope you enjoyed the photos.
JB
Posted by JBar at 3:10 PM

John, the good news was it was cold enough (28F) that any water splattering on your clothing quickly froze, preventing you from getting wet. The bad news is it did the same on your bike which froze our front der. in the big ring which made getting up Overlook a little challenging. Worth it to get out of the house though!!!