Competitive Cyclist News: Litespeed Is Back

Today, I got the official announcement that Competitive Cyclist is once again a dealer for Litespeed. I have a bit of an attachment to Competitive Cyclist and to the Litespeed brand, so I was glad to see the reunion. Though, as noted here on several occasions, we of the JBar household spread our bike business around, it was at Bikeseller/ Competitive Cyclist that Diane and I bought our first serious road bikes. Craig and Elaine Zediker were longtime friends, so it was natural that we go there when it came time to buy bikes. The fact that we had been invited to several store Christmas parties where we were plied with food and drink didn't hurt their chances, either. We counted on Craig and the guys not only to sell us bikes, but for service and advice when we were feeling our way into the cycling community. When, after a year on my very capable Cannondale, I decided to step up to a better (read: "more expensive") bike, I was attracted to Litespeed due to their reputation of impeccable ride quality and for the many attributes of titanium as a frame material. Ti is light, it's remarkably strong, it does not corrode like steel, it's not subject to notch failure like carbon or metal fatigue like aluminum. And I found that Litespeed riders are kind of like Subaru owners. They love what they're driving and tend to hang on to them, though unlike the titanium Litespeed, even a Subaru eventually wears out. I got out the checkbook, let Craig have his way with me, and loaded up my spec with a full DuraAce gruppo, some nice Mavic wheels and a solid bunch of bits and pieces. I couldn't believe that I was spending that kind of money on a bike, but I've never regretted a penny of what I spent. I've replaced worn parts, but there's really not much room to upgrade when you buy the good stuff. 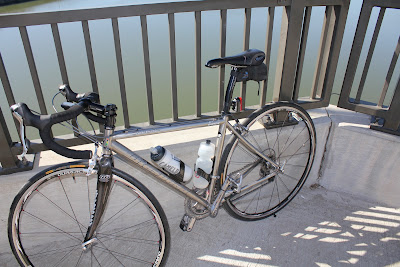 My Litespeed Ghisallo is still just as fresh for me as it was some 35,000 miles ago.
A quick wipe with a little WD-40 on a rag and it looks like new.
That was history.....﻿
Things changed as Competitve Cyclist outgrew the Bikeseller moniker along with the local bike shop business model, the front doors were closed and CC enjoyed rapid growth as an international purveyor of high end bikes and gear. I still considered Competitive Cyclist to be my LBS, but their business model didn't work for some of their bike lines. They eventually gave up Litespeed, along Cannondale and Trek, in order to pursue their now-proven business model. All of that is to say, I'm glad to see Litespeed back at Competitive Cyclist. Like CC, Litespeed has adapted to the times. Though the company was sold a few years ago, they still hand make titanium bikes in Tennessee, but consumers want the carbon, so Litespeed is delivering.

It apears that Litespeed does carbon with swoopy elegant lines
and big aero tubes as well as anybody.
I haven't seen the carbon lineup "in person", but they appear to have a good range of premium bikes. Whatever philosophical hurdles they had to get over to reestablish their Competitive cyclist connection, I'm glad things have circled back around. Perhaps it's just sentimental, but I'm glad to see them back and I'm looking forward to seeing some new Litespeeds around town.
Posted by JBar at 9:31 PM

Enjoyed getting the Competitive email today as well, such cool cats and such cool Ti bikes. Nice post Jbar.