Last week, our friend Dan Lysk at Arkansas Cycling and Fitness posted a letter on Facebook that had been sent to both the Arkansas Times and the Dem-Gaz by Mr. William Carlyle. Mr. Carlyle came across as an all-too-typical selfish crank as he complained about cyclists riding on the BDB disrupting his "quiet, meditative walk across and around the Big Dam Bridge" and, by the way, looking silly in spandex while racing about at the breakneck speed of 15MPH. 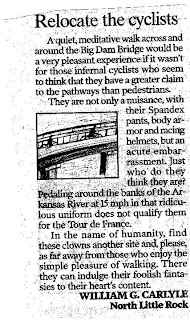 Mr. Carlyle's selfish, mean-spirited little poke.
Of course, most of us think we look pretty good in our kit, in addition to the fact that, like most specialized sportswear, it is the most practical attire for the endeavour. I had seen Mr. Carlyle's letter and resisted the impulse to fire off a smart-alecky letter of my own, assuming that it would bring out any number of nutjobs who can't comprehend that riding a bicycle, especially on a bike/pedestrian trail, is a legal and reasonable thing to do. I would have had to point out to Carlyle that NLR has many miles of perfectly serviceable sidewalks on which bike riding is forbidden and that heading to the BDB, arguably the most densely populated spot in the state for walkers and riders, for solitude was a bit of folly in and of itself. I rank him right up there with the letter writers who have been complaining about the diminished signal strength of KARN with their allusions to and illusions of vast left-wing conspiracies depriving listeners of the wisdom of Rush and Glenn. Heaven forbid that they have to deal with some facts uncolored by Rush's drug-addled rants or Beck's self-professed mission-from-God white board lectures, but, wait a minute, I'm ranting off-topic now. Back to the subject.
I was delighted to see Leslie Singer's letter in the Dem-Gaz last week. 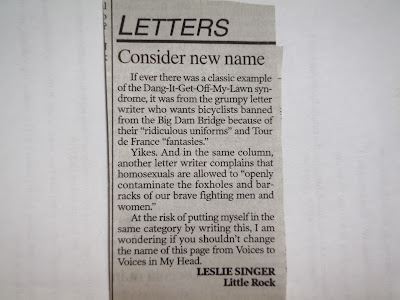 From the "Voices In My Head" page.
It was appropriate that this letter appeared above a letter in which a writer blamed high gas prices on the fact that we haven't drilled for oil ANWR or all the coastal areas of the US. Not a word about trying to conserve what we've got, but there I go again.
In a conciliatory gesture to those possibly offended by my views, it was my intent to provide instructions for the construction of tin foil helmets to the tortured souls who, as I had, had long been convinced of the efficacy of foil hats in blocking the dreaded "voices". My plan was foiled by the scientific finding that such head gear may actually intensify certain frequencies. 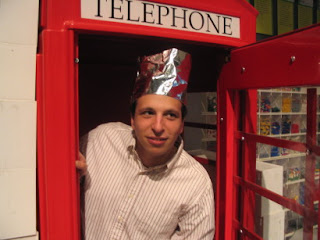 This tin foil fez may be stylish, but it fails the radiation deflection test.
Like riders and walkers on the BDB, the vast majority of us get along just fine, and there will always be a few who just can't seem to grasp the concepts of sharing and consideration for others. Some are simply mean-spirited, but many hold views that are ridiculous to the point of being entertaining. And that's why I read the Voices (In My Head) page.
Addendum: Sunday, 7:10AM
Here is a link to a very thoughtful and much less snarky comment on Mr. Carlye's letter:
http://arkansasoutside.wordpress.com/2011/02/07/why-cant-we-just-get-along/
My thanks to Lynn Warren for posting this link to my Facebook page. The Arkansas Outside blog is worth checking out. It often includes some very good mountain biking information and articles.
Posted by JBar at 9:47 AM

Some of our pals do ride too fast on the bridge and if enough letters like this show, we will be walking too.

Would it boggle your mind to learn that you have conservative/libertarian readers who are also fellow cyclists? Or that some of us can listen to and enjoy Rush Limbaugh while agreeing that Glen Beck is insane and Sarah Palin is an airhead?

No one fits into perfect little boxes. For instance, I am perfectly willing to entertain the possibility that you (unlike virtually every other lawyer I know including my wife) actually have some understanding of economics and the ability to do math above an eighth-grade level.

It is your blog and you are free to say what you like. However you may want to contemplate that communities are strengthened by understanding our differences rather than belittling one another.