The past weekend was picture-perfect for area riders, with cool mornings leading into some sunshine and temperatures in the 70's. After struggling somewhat embarrassingly on recent rides, I've been feeling the need to increase my mileage, hill work, and ride intensity, so I set out on Saturday to address two out of three, anyway. I headed out mid-morning Saturday with Diane as she rode down to Argenta for a yoga class and then met my pal Heather for an LSD ride out west of town. That's Long, Slow, Distance for you fellow refugees of the 1970's, and it's a great term for making it sound like your training plan requires a slow pace when, in fact, your fitness just sucks. It's February. It's OK to suck. Other, more elaborate, excuses come later in the spring. Anyway, we stashed our armwarmers at the top of River Mountain Road, which is usually where I decide whether I'm overdressed and whether I've got legs for the rest of the ride, and then we headed out via the Pleasant Forest designated bike route. Pleasant Forest adds another climb, but we were not early enough to beat the traffic and make the mad dash out Highway 10, and a near-miss by an early morning drunk on our last ride a few months ago made us wary. 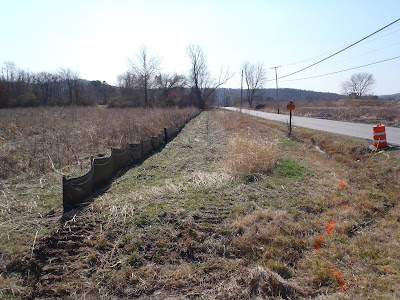 When these trails are finished, they will become part of a network that will
allow cyclists to ride from anywhere on the River Trail to Pinnacle Mountain
State Park in relative safety via the Two Rivers Bridge.
The trail system will make it much easier and more safe to get to the primo road rides west of town, but many riders may simply choose not to mix it up with cars at all.﻿ There will be plenty of options for road miles within the park and trail system, not to mention easy access for mountain bikers to Camp Robinson, Burns Park, Emerald Park, Allsopp Park, and the growing trail system at Pinnacle Mountain State Park. 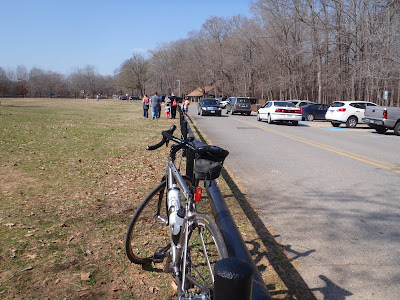 The primary parking lots at Pinnacle Mountain State Park were full and the overflow area was seeing a steady stream of arrivals. This is a good water stop and it also has a Coke and snack machine in the event that you're short on calories. There aren't any handy store stops on the Barrett-Garrison Rd. loop. 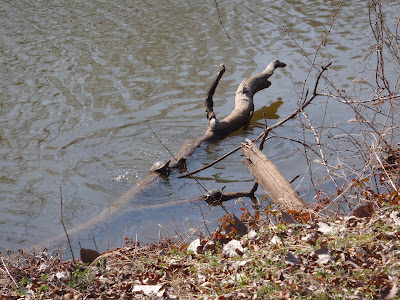 There was still a thin layer of ice in many of the backwater areas of the river last weekend. It was a turtle beach party on these logs before they became alert to us and slipped into the water one by one.
Our 58 hilly miles were probably just what I needed, and Diane was slightly entertained Saturday evening when she had to put my socks on for me after leg cramps resulted in a couple of ﻿failed attempts on my part.
Wait, wait! There's more! That was just Saturday. Single-track ahead!

Sunday was also forecast to be a nice, warm day, albeit with winds of 20 to 30MPH, so I made the decision to head to the woods around midday. I'm admittedly averse to riding my mountain bike on the road, so I drove down and started near the BDB, taking a couple of passes on the Pfeifer Loop before riding up to Burns Park in search of newly built trail as reported by Clint in commenting on a recent Camp Robinson post. I cut through the quarry near the pump track and entered the single-track on the Green Trail (click for map). From there, I rode over around the hill and crossed over to the short track course near the BMX track (does it seem like we have a lot of bike stuff?). After following the red-green trail blazes from the back of the short track, came across a new trail junction, which headed off to the right. There was a fork or two, but I stayed left, or uphill, eventually popping out at the Scout Trail parking area near the freeway. 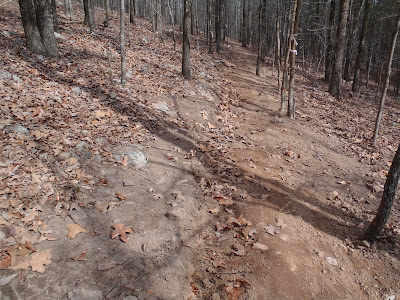 This stretch looks machine-built. I'm not sure who is doing the work, but have a lead or two. Post to comments if you have any information. We'd like to know who to thank! 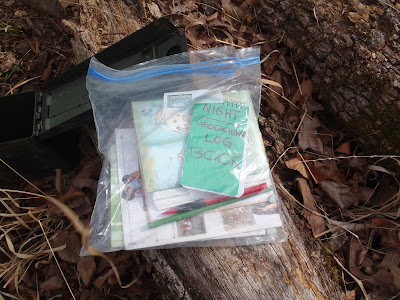 I ran across this geocache stash and had to check it out before returning it to its place. 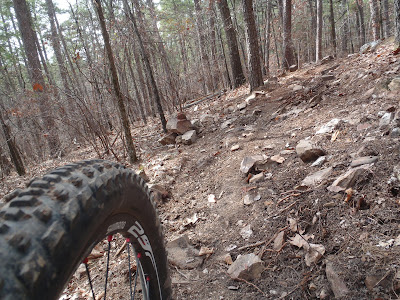 Most of the new trail was still pretty rough, but had seen some traffic to ride it in a little. I was glad to be rolling on the big wheels for this particularly raw stretch. 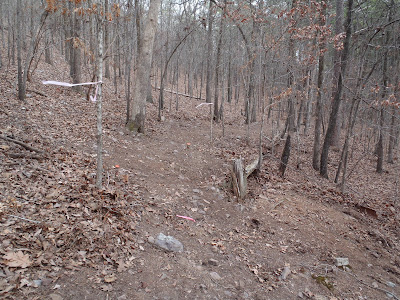 This was more typical. It was even windy in the woods, as is made apparent by the horizontal ribbons in the trees.
We don't have to look far to find great riding in Central Arkansas and the opportunities are growing by the mile. The new mileage in Burns Park was a surprise to me, and there are current efforts to add to the trails at Pinnacle Park, the CARP guys are ready to get back to work at Camp, and the new paved trails out west will be especially enjoyed by road riders using the Two Rivers Bridge. As I visit with folks at the local bike shops, it seems that they are feeling the growing enthusiasm as new riders join the community and buy bikes. This kind of growth feeds on itself, with great infrastructure drawing more and more riders and more users able to demand a bigger share of funding for new projects.
Let's go ride!
Posted by JBar at 7:51 PM

I saw the guys working on the new trails at burns park Wednesday. There were a few city of NLR trucks and a department of corrections van parked near the base of the 2 x 4 climb.

Thanks! I heard it may have been a volunteer who works closely with NLR Parks, so that all makes sense.