In April, the North Little Rock Parks and Recreation Commission approved the development of a zip-line and high ropes course at Big Rock Quarry and Emerald Park along the Arkansas River Trail and the Highland Trail. The attraction would be operated by Loco Ropes which currently operates a concession at the Ozark Folk Center State Park near Mountain View.

As most of you will recall, the Quarry was the subject of a proposed sale to developers back in 2011. That proposal was well down the road before the public got wind of it. The outcry was immediate and loud as all the local media outlets jumped on the story. The result was that the City delayed the vote to sell the property, the developers backed away, and the property was brought into the parks system.
I found it to be a refreshing example of an informed public.

State Trails Coordinator & Project Officer, had spread the word to the trail advocacy community, and the appropriate legal notices were run, but there was very little in the way of "public" at the meeting. Joe Jacobs and Lisa Mullis of Arkansas Outside, Coreen Frasier, Michael and one of his colleagues were there, as was I. Almost everyone in attendance was either a city or state employee, or commission member. They needed pubic comment for the record but Berndette Rhodes of NLR Fit-2-Live, was about the only one to step to the microphone. She expressed her concern that the River trail be protected.

The Loco Ropes would develop the zip line and ropes courses at their expense, but the land and trails will remain in the parks system and will be open to the public. The city already maintains River Road and the gravel road into the site. The parking lot will be gravel. 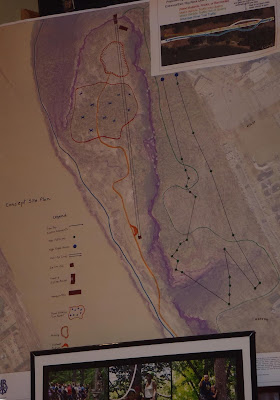 As I understand, the draft concession agreement calls for the City to receive small set amount in the first year, and then $10,000 or 5% of revenues, whichever is greater, in subsequent years.  There will be no substantial permanent structures built, and the Loco Ropes folks assured a questioner that trees would not be cut. Realistically, I would expect to hear some chainsaws, but the idea is to put people into the canopy, so I would expect it to be minimal.

The plan for the River Trail is for bollards to be placed along the south side of River Road inside the current gates to give trail users a buffer from traffic. I would expect most cyclists to to simply ride the road except perhaps during some high traffic event.

I think this was pretty much a fait accompli  (that's "done deal" to us regular folks, but I've got to use the remnants of my 2 years of high school French every now and then.) until State Parks notified the city the an environmental assessment was required for the "substantial change of use". That brought about a public meeting with the NLR Planning Commission which was conveniently held at 4:45 on Tuesday afternoon. In my experience, public officials really don't want to hear much from the public when it comes to decision making, but various laws require that they open the doors to the us of the rabble. Their position is understandable, as the the public can be ill-informed, argumentative, vindictive, and just plain old wild-ass crazy, but officials must remember that these are the people who elected them.

What to make of it
Surprisingly to many, I don't really have a strong opinion on this.
Given a choice, I'd rather not have squealing zip liners flying from the quarry walls and giggling adolescents overhead on a ropes course as I enjoy the solitude of the Highlands Trail. We cannot claim the quarry is pristine, as it has been mined for near 200 years, but it does still have a natural beauty, and it and the woods above are a remarkable island in the heart of our city. When you climb into the woods and the waterfalls are running, it is easy to feel that you're far away from urban noise and clutter that surrounds us. Even the remaining industrial structures of the quarry itself add character and, as one wag offered, in a few years the remnants of the zip line and ropes courses may well join the historical relics.
Unlike the proposed sale and development of 2011, I don't think this calls for us villagers to storm the castle with torches and pitchforks, but if you have an opinion, contact Parks Director Terry Harwick, thartwick@nlr.ar.gov, or your alderman if you are a NLR resident.
And, of course, you may comment here.
Posted by JBar at 7:36 PM

Dont ruin the peacefulness of that beautiful area that is, dont forget, part of the VA hospital where peace and relaxation is needed. We dont need screaming rednecks ruining it all

Thanks John. Concerns: The view change from the high trails; to me it's much like having to look at the roof of WalMart from Pinnacle.Ugly.The issues with people climbing the fences up the to get a better look might get worse as kids try to see, yell at, throw things at people on the course. I see that happening. The traffic that will be necessary to make any real impact on the NLR City Budget and WHERE will that money go. Is it marked for Parks and Rec and/or River Trail maintenance? I've done the ropes course at OFC run by this company. It's great, I enjoyed it, I've encouraged friends to use it. They didn't have to put in extra parking or move traffic in that case.