I've struggled to add any value to the league this year since I can't reward or taunt you by awarding a bunch of valuable prizes, but I will say that we have had some strong team showings


Movin' On Up- Saturday Was a Great Day at the Tour  FOR MY TEAM!
Sunday, not so much.

Sorry, I could not contain my exuberance at having the 1st and 2nd place riders in Saturday's stage. After having really bad teams in the Fantasy Tour de France for the last couple of years, this year's bunch has been steadily moving up, capped by Froome in first and yellow, while Dan Martin picked up 2nd place. Last year, I think I finished 47th out of 49 teams, while the year before my team was down to 6 riders from 9 after the opening week.

The strong stage gave my team top points for the day for the first time ever. Unfortunately, that still doesn't give me bragging rights among my core ride partners. Sam's, aka Lester Moran, Road Hogs moved to the top of the league, while Jumbo Jo slipped slightly to second after 3 days in the lead. The Home Team is third, but I expect big things in the coming high mountain stages. Having Sam, Jo and I in 1,2,3 was fun while it lasted.

Sunday shook up the Minileague standings much than they did the Tour itself.  Tom Doumolin, who was one of my early crash casualties last year, rode away from a powerful break to claim the stage, while Alberto Contador (my GC guy last year and early crash-out in 2014) withdrew. Doumolin was a revelation at last year's Vuelta before falling to the pure climbers near the end of that tour. He is a big, strong time trial specialist who managed to stay with, then drop, the best climbers on the Tour.
On the rest day, the grimly named Disc Brake Amputees team reigned in a brief moment of glory, only to be toppled on Monday as the Road Hogs regained the league lead with Jo's Jumbo NL back on his wheel in second. Sam and Jo made some heady picks with riders like Greg VanAvermat and Stephen Cummings.
Gaylen Horton is back this year with another high scoring Veni Vidi Velo team, while Moffeed has greatly improved over his last year's performance, when he was about the only thing between me and DFL at times. 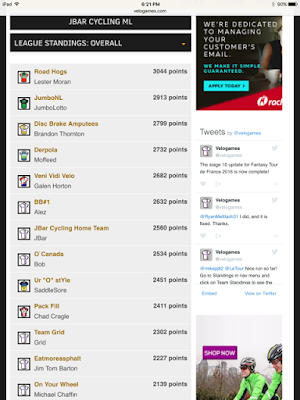 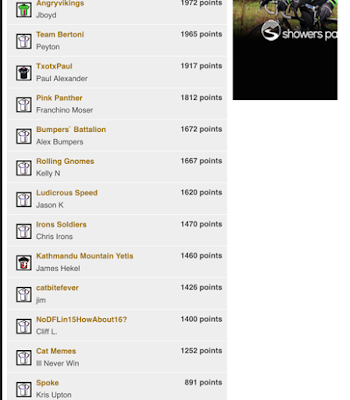 The league is strong with the leaders in the top 2% of 42,000+ contestants.
We have some sprint stages upcoming, followed by the reckoning that is sure to follow in the Alps. Nobody is running away early with the league honors this year, as things are sure to be reshuffled in the coming days.