Tour De France- The Standings That Really Matter After Stage 3

Well, the standings that matter to the 25 JBarCycling MiniLeague team directors.I can tell that it matters as I was given a celebratory ration of shit by the JumboNL team director after her team's sterling performance in stage 2. Of course, like Andre Greipel in stage 3, her celebration came just a tad early, as she had slipped 2 places to third the next day. Still, not too shabby. That said, the sprinter-heavy teams are showing well early on as expected. O Canada, led by Bob, currently leads our standings. 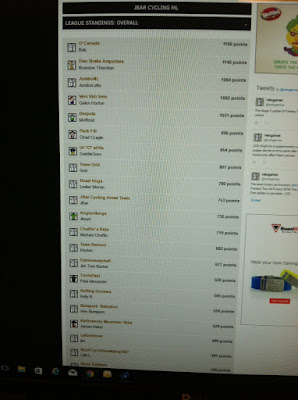 My own team is currently 10th of 25. I can't say what drove the picks of other players, but each year I try to put emotion aside and be objective about my picks. And I usually fail pretty badly. Mark Cavendish has long been my favorite rider in the peloton. I like the sprinters and, while Cav can be as cocky as a banty rooster, he impresses me as an truly humble guy who appreciates his position in life. It took a while for Peter Sagan to grow on me, but he's right up there with Cav in my estimation, and is certainly more universally popular. I didn't pick either for my team this year and have been punished for it, as Cav has won 2 stages and Sagan won the other. They've swapped the yellow and green jerseys and racked up big points.
My perspective is that as a fan, the Tour could not be going better. As a fantasy team director, I'm being punished for my objectivity.

Question marks for Olympic hopefuls
At question is whether either Cavendish or Sagan will finish the Tour, as Cavendish devoted much of his season to making the British Olympic track cycling team and Sagan will ride mountain bike in the Olympics.
Sagan is more likely to ride to Paris, as I don't think his mountain bike bid as is serious as Cavendish's track ambitions.  Cavendish is off to an incredible start in the Tour but the mountains of week 3 may temper his enthusiasm for a sprint on the Champs d'Elysee.

As I write this, Stage 4 is in the books but no spoilers here!