JumboNL team director, aka Jo Spencer, celebrates her birthday today from atop the JBarCycling leader board after Greg Van Avermaet's unlikely win in yesterday's hilly stage. GVA is regarded as a classics specialist but he and his breakaway companions put up to 15 minutes on the GC contenders in a move that ended with him in yellow. He's not only in yellow, but has over 5 minutes on all of the GC contenders.
Normally, the team of the yellow jersey takes the responsibility of defending the jersey, but I see a different dynamic here. Van Avermaet is unlikely to hold the lead through the mountains, but the teams of the likely GC contenders cannot count on him losing 5 minutes if they allow BMC to control the tempo. 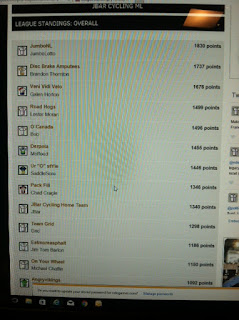 Though everyone was supportive of a Velogames competition without the prize pool that I've managed in recent years, Jo's immediate reaction to her elevated position was to ask, " What's the prize for leading after Stage 5?"  The prize, my dear friend, is the momentary respect and admiration of your peers.  Enjoy it while you can.
Posted by JBar at 9:16 AM