The last week of the Tour has been interesting, if somewhat predictable. American Tejay Van Garderan's tearful departure due to illness on stage 17, Garaint Thomas's dramatic head-first crash into a utility pole, Nibali's attack and stage win on Stage 19, and Quintana's desperate race for second place on Alpe d'Huez all made for a bit of drama, but the baseline has been has been the steady performance of Chris Froome and TeamSky.


In the mini league, there has been more excitement. My phone has been blowing up today, as I hear about side-bets, dinners and beers won and lost, and some general, "take that final score bXtch" smack talk.
In the last few days, I could look over my shoulder and see the glow of the lantern rouge as my team has dropped to 45th  place, while Matt Milner's Ridin' Dirty rose to the top of the heap, only to fall to the middle of the pack, along with most of the previous top level teams. There have been massive shifts in the league over the last couple of stages, and I'm just relieved that my team did not come in DFL.

I've made similar mistakes in choosing my team in each of the last couple of tours. I've stuck with Mark Cavendish, though his star is waning, and I've mostly ignored Peter Sagan, whose consistent performances and all 'round ability have made him the perennial green jersey holder. Even without a stage win, his close finishes and dominance of intermediate sprints make him solid gold for a fantasy team. My second sprinter, Kristoff, disappointed as well. History was against my GC pick of Alberto Contador in his attempt to pull off a Giro-Tour double.
I'll know better next time, but may not finish any higher.


Winners:
It appears that we had some late joiners, as we started the Tour with 41 teams and finished with 47!

Lanterne Rouge - The lanterne rouge refers to the red lantern which was hung on the back of the caboose of trains. It also refers to the last place finisher. DFL as it is known in many circles.

Drew was concerned early on that his wife was going to beat him, as there was some trash talking going on at home. Well, Drew, it was worse than that.

There had been a protracted battle for last between Cliff L. and Matthew Parrish, but both bumped up to some degree of respectability in the final days of the Tour. In doing so, they missed out on any chance of winning anything, while Drew somehow manged to sprint, slog, flat, bonk, whatever you do to race to the back of the pack, to claim a prize.

It is interesting to look over the teams that did really poorly, as all looked good on the front end. Drewsky had Contador and Nibali, along with Michael Rogers, Joaquim Rodriguez, and Stage 16 winner Rafal Majka.
Crazy stuff. 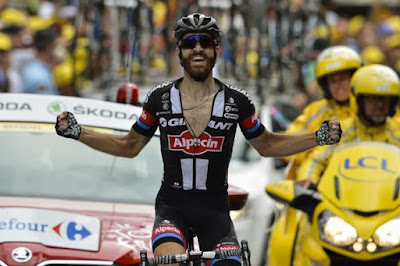 The Vikings were 5th in points for this stage but Jeremy had the winner, Giant-Alpecin's Simon Geschke. Jeremy had some insight, liked the Viking-style beard,  or was just lucky. Geschke has raced at the top level of the sport for at least 8 years, going back to Team Milram in 2008, and has had a grand total of 3 wins. 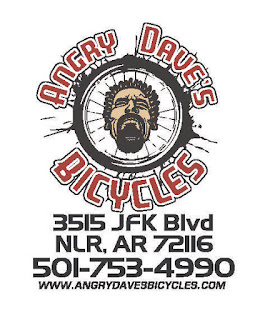 Have I mentioned that I really don't like Andre Greipel? I guess he showed me that my sentiment has very little influence on his success, as he has emerged as the Tour's top sprinter.


Folks,
I hope you've enjoyed played the game. If you have won a prize, please contact me so that I can hook you up with the sponsor. If for any reason you will not be claiming your prize, let me know that as well. It has been fun for me to watch the progress of our teams, but I will admit that the Tour coincided with some incredibly busy weeks for me. That made for less frequent updates that I had planned, and I was unable to follow the race as closely as I usually do.

Thanks again to Angry Dave's, Arkansas Cycling and Fitness, Ozark Outdoor Supply, and Spokes, who sponsored our fun with great prizes. There was nothing in it for them beyond community spirit and a desire to join in the excitement. Shop with them and tell them "thanks" when you do!

Thanks for doing this is was great fun !!

Man, what a great Tour and great fantasy league. Thanks so much for organizing it and getting all the donations! Drew ninja'ed my Lanterne Rouge finish from me at the very very end but it made it exciting. At least I don't have to hang my head in shame or endure the endless embarassment from the rest of my family. ;) Ha!

Cliff, I was dropping fast, so i'm glad that I was able to make fun of Drew in the end.

Had a great time with this league on le Tour - will you be doing one for the Vuelta? Velogames just posted their entry is open for setting up your Vuelta teams.