And Our First Winner is....

Jason Warren's Team Busted Can O' Biscuitss piled on 380 points.
I'm not sure about that extra 's' on biscuits, but it's a winner so I will assume it has some kind of race ju-ju...or that Jason counldn't get his finger off of the key.
Jason wins a T-Shirt from Angry Dave's Bicycles in Park Hill. Thanks, Dave!
Jason racked up the big points with stage winner Rohan Dennis and third place Fabian Cancellara. He's follow closely by Michael Chaffin's Chaffin's Ride and Of Course I Still Love You, managed by the prophetically pessimistic Iwillneverwin. Those two teams tied at 323 points.

Sunday should end in a sprint finish, and the winner will get the much sought after JBarCycling coffee mug. 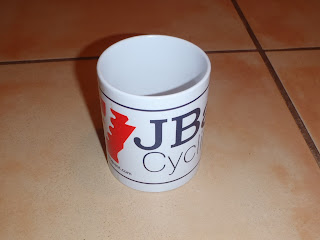 Coffe just tastes better from one of these!
This custom designed, quality crafted, limited edition, cant't be bought-in-store, not-seen-on-TV item will go the the highest scoring team on the day among those who have the winning rider. In the unlikely event that nobody has the winning rider, highest team score for the day takes it. With a prize like this, there is sure to be a lot of figurative elbow-throwing, bumping, and head-butting in the final kilometers.
I hope to have the prize list completed and the prime stages lined out in the next couple of days. Some of our prize sponsors got hard to fnd over the holiday week, but we're off to a great start.
Posted by JBar at 7:21 AM