Along The Trail- Rising temperatures, rising water, and trashy fishermen.

Scorching temperatures are upon us creating a crazy busy atmosphere in my paying job in the HVAC business. That is more than enough to fill every available moment. Add in a very exciting edition of the tour de France, a wildly successful 41-team JBar Cycling minileague, the many chores associated with maintaining households, along with my desire to actually ride my bike, and it is not hard to fill a busy day. Yahoo! No boredom, here. 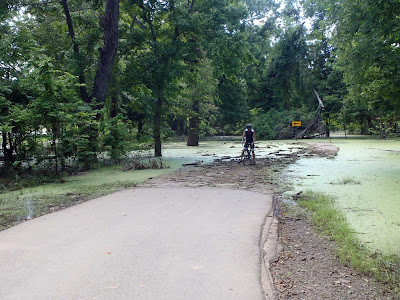 This rider decided to test the waters rather than the detour. There are likely things in there that can eat you, so I'll just go around.

The S-Turn near the BDB was dry for about a day before rising water flooded it again. More rain in NW Arkansas and releases from the bulging reservoirs upstream promise to keep the river high for a bit longer. 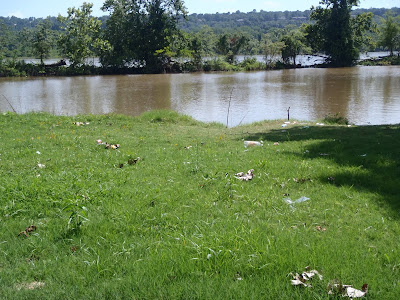 Trail users have had to adjust, as have many of the fishermen who usually haunt the area below Murray Dam. Unfortunately, bank fishermen are among the trashiest variety of humans, hauling in all sorts of crap and leaving where it drops. They seem to give it no more mind than they would fallen leaves or driftwood. 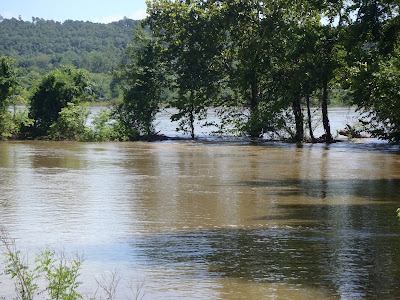 On Sunday afternoon, water was pouring into Victory Lake as it topped the jetty.

All of us who ride through Arkansas summers know that it can take its toll. A friend recently decided to take a little nap on County Farm Road after succumbing to the 97-degree temperatures and a hard session of running the evening before. We noticed he had dropped and by the time we got back to hm, he was beginning to regain consciousness. He went from "OK" to "not" in a few short minutes and got to spend the night in a hospital for his efforts. Our egos can get the best of us, but when it comes down to it, heat and humidity don't care if you're a badass. Don't hesitate to back off if you're feeling shaky. And often a slow spin is a better cool down than stopping.
Be safe out there.

Anonymous, just because rats have been around since the beginning of time doesn't make their behavior anymore acceptable. Speaking as a fisherman and a cyclist: disposing of waste properly applies to everyone, everywhere. Simply stated: pack it in, pack it out. Keep our parks and trails clean.

I grew up as a poor bank fisherman and even a s a child was appalled by the trash my fellow bream jerkers left behind. No excuse for it. Period.