A Longing For The Trail

This a deviation of my "Along The Trail" features. Much of my subject matter is inspired either by things that I observe or experience out on the bike. It also often comes from information that I obtain by attending the meetings of  various advocacy groups or from conversations with folks who are "in the know" be virtue of whatever their position may be. This time of year, committee meetings have conflicted with vacations or holidays and my long evening sweating out the miles on my bike have been replaced by a lot of reading and fidgeting as I wait out my 17 days in a cast. I fear that my fitness is fading faster than my tan lines and I am very anxious to be back on the bike a back in circulation!
In the meantime, here are a few odds and ends:

BACA Meeting Wednesday, July 11
The bike will have to wait, but there is a BACA meeting Wednesday night at the Capital Hotel. The Capital has free valet parking and there will be a group of cyclists leaving the Clinton Library parking lot at 6:30 to ride to the meeting. Little Rock Mayor Mark Stodola will be speaking. He will be addressing bike infrastructure plans for the city and I expect him to call for support for an upcoming vote to extend a property tax millage. This could serve as a vehicle to help finance the proposed River Bluff trail section behind Dillard's.

If you have ambitions along the lines of real estate development and would prefer a location that is convenient to your favorite ride, this could be the deal for you! 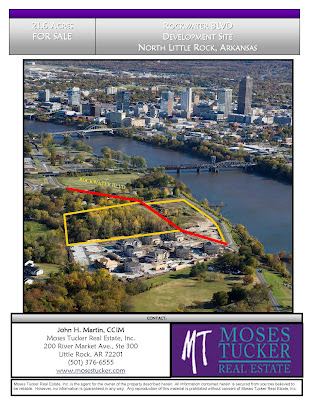 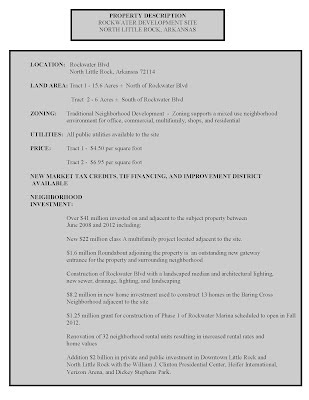 The entire area was originally slated to be a planned community with a mix of multifamily and single family homes, but the grand plan has sputtered along with the real estate market and the economy as a whole. That said, the marina seems to be on "go" and the apartments are leasing, so I do expect this very desirable location to be put to use.
If one of you guys buys this, I expect parking consideration and I expect JMar to buy me a beer. And, no, I will not post general listings for all of my other realtor friends.

Still no recent word on the Diamond Bear Brew Pub planned for the nearby city-owned lots.


Tale of the Rabid Raccoon and Packin' Mommas

Several weeks ago while riding in through Two Rivers Park, our small group encountered a man wielding a large stick as he, along with his wife and dog, skirted on the opposite side of the trail from a very out-of-sorts raccoon. It was broad daylight and the raccoon was dragging its hindquarters and rubbing his head on the ground as he eyed the steady stream of passers by. Our immediate conclusion was that the 'coon was rabid and, though it was seemingly too ill to make any vicious attacks, we took the precaution of warning approaching walkers of his presence. One pair of young ladies, walking rosy-cheeked girls in a twin stroller, calmly responded to our advisory by saying, "We're OK. We're packin'". She reached into her diaper bag, pulled out her dainty little handgun case and slipped it under her arm, smiled and said, "Not looking for trouble, but, you know..."
On one hand, I was comforted that these girls could take care of themselves, on the other hand, it's a little disturbing.....
Don't get me wrong, I come from a long line of gun enthusiasts, though I do not compelled to carry heat.

I was later told by the Game and Fish biologist I eventually made contact with that the raccoon likely suffered from distemper.

Hope she doesn't confuse the handgun case with the wipes case!