From the Tour to the Olympics In One Short Week

The Tour de France played out pretty much as predicted. The time trial heavy course supposedly favored both Bradley Wiggins and Cadel Evens. It worked out for Wiggins and for his second-place teammate Chris Froome; for Evans, not so much. There were some fairly dramatic successful breakaways, but they were mini-dramas due to the fact that they had little or no affect on the GC race. Andre Greipel took more sprints than would have been likely if Cavendish had not spent several long days hauling water and riding at the front for Wiggins's Team Sky and Peter Sagan was a terror out of small groups or on slightly uphill finishes. Frank Schleck was out of contention but seemed to be riding himself into form....right before that pesky positive test.  American Tejay Van Garderen rode a very impressive Tour on his way to the white jersey of the best young rider and a strong fifth place in the GC, especially considering that he was hindered on several stages as he rode in support of a faltering Evans. None of the other contenders could ride away from Team Sky and once the yellow jersey was on Wiggins, it was never under pressure.
Good stuff,but very little excitement.

I was late to sign up and invite players for this, but there were 7 teams in the JBarCycling MiniLeague. After a strong start, I sat in second place for much of the Tour, lurking like a sprinter on the wheels of the second strongest rider, then BOOM! My man Mark Cavendish blows them away in the last two stages, capping Sky's Tour with an authoritative fourth consecutive win on the Champs-Élysées and putting my fantasy team ahead in my league by a mere 10 points! 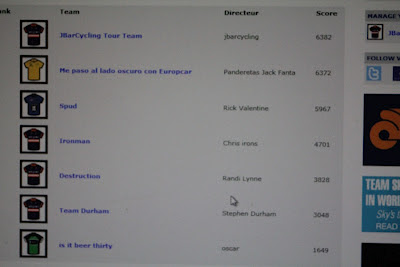 I got a late start on the Tour, but hope to have a bigger Mini-league (like jumbo shrimp) for the Vuelta. Watch for the team rosters as they are released for the Spanish tour and pick your own super team!

Tyler Farrar, Taylor Phinney, Timmy Duggan, Tejay van Garderen, and Chris Horner will represent the US in the Olympic road race Saturday. Tejay and Horner are both coming off of strong performances in the Tour de France, Farrar could contend if he makes it to the finish in a pack, and Duggan and Phinney add good power. Team Great Britain will be a force leading Mark Cavendish, who had fewer days under pressure to sprint at the Tour and has worked on his climbing form for the hilly circuits of the London course.  I'll be rooting for Team USA, but I'm a big fan of Cavendish, so a win for Cav in the world champion's rainbow stripes and on home ground would not terribly disappoint me.

I will do a bit more research and planning for next years competition!

Don't wait for next year! Let's get lined up for the Vuelta.