Well, Christmas has come once again and emptied in its wake the usual mixed bag of good news and bad, grace and greed, jolly elves and Scrooges, gifts and Grinches. My holiday weekend has worked out nicely, having had the infrequent opportunity to spend some quality family time with my own small clan, though I will admit to experiencing a little Scrooge-a-tude Christmas morning. My usual routine is to ride to my in-laws for Christmas Day festivities and then waddle home at dark with a full belly. I've had some questionable Christmas rides involving howling winds, cold, and generally crappy cycling conditions, but both the execution and the concept of the trip always made it worthwhile. Christmas 2011 was a perfect day for a ride, but, alas, newest nephew had a christening on the schedule, the venue for which precluded my usual spandex-clad arrival. Though Presbyterians seem to be a fairly open-minded bunch, my tights and helmet hair might have upset some sensibilities of those arriving for Christmas morning services, so I resigned myself to a rideless day. My selflessness was rewarded when I was told that there would be an unexpected four hour window between church and Christmas dinner. I used the opportunity to ride the River Trail system and make note of some of the gifts that the Central Arkansas cycling community has recieved over the last year.

Santa Claus Gifts: The Big Stuff
At our house, our big gift always came from Santa Claus. We would exchange gifts from one another on Chrismas Eve, then awake Chrismas morning to find that Santa had visited. By most standards, it was slim pickings, but our Mom always managed to come through with something special for each of us. Here in Central Arkansas, 2011 brought a couple of very nice gifts for cyclists in the form of the Two Rivers and Clinton Park Bridges.
Two Rivers Bridge
Of the two major projects, Two Rivers Bridge is the most valuable to cyclists, in that it opened a safe route to the trails of Two Rivers Park and to the many popular road routes that lie west of town. 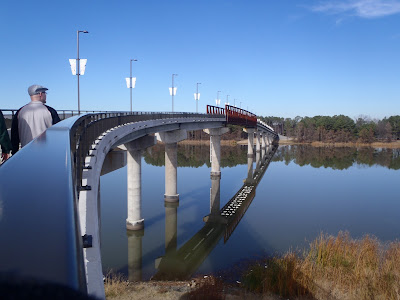 The Two Rivers Bridge and Park serve as both a connection and a destination. Walkers can appreciate the proximity to the park and cyclists enjoy the safe route to the lightly used roads and trails to the west. 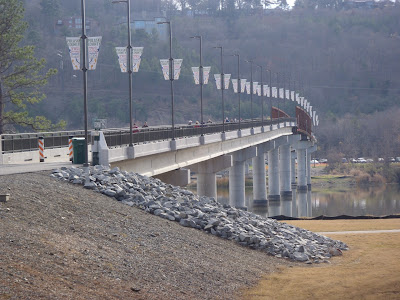 Two Rivers Bridge, with its easy access and short span, has proven to be immensely popular with all kinds of trail users. On Christmas Day, the parking lot was full and the trail alive with visitors. 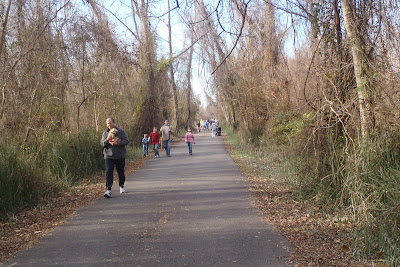 The Christmas Day traffic on the Two Rivers Park trail was heavy with strollers and dog walkers. 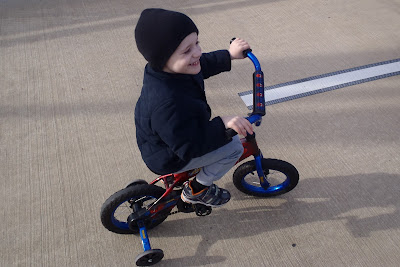 This rider was enjoying the light traffic on the BDB.
The Two Rivers Bridge may have displaced the Big Dam Bridge as the most popular place to show off the new puppy, Christmas bike, or the snappy new Nike jogging suit, but the BDB remains the iconic structure of the River Trail, both in terms of its scale and of its importance within the trail system.
Clinton Park Bridge
The Clinton Park Bridge anchors the east end of the River Trail and its completion represented a somewhat symbolic "closing of the loop". The CPB is a very nice alternative to the Junction Bridge, but still has a feel of having been built more for a stroll than for transportation. That's just fine, and it is usually active with folks who look more like visitors than locals. 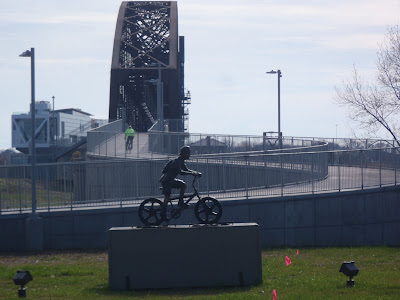 I find myself using the Clinton Park Bridge more frequently, enjoying the change of scenary.
The Clinton Park Bridge is a boon for downtown bike commuters and is infinitely more bike friendly than the elevators and stairs of the Junction Bridge just upstream.﻿
Now, the stocking stuffers!
Sometimes, smaller gifts turn out to be the most treasured. Only time will tell, but here are few trinkets to put smiles on the faces of biking boys and girls. 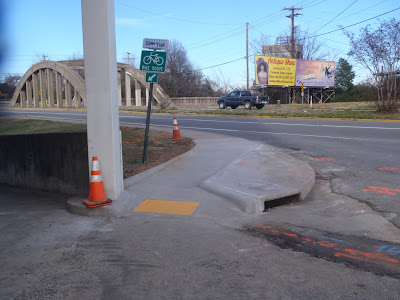 The intersection of Cross and LaHarpe is still a hazardous puzzle, but this recently improved approach resolves the problem of having to jump a curb on to the sidewalk. 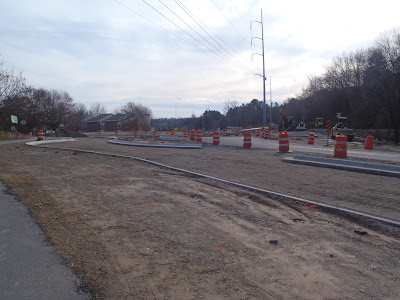 The traffic circle and extended bike lane under construction at Riverfront and Rebsamen Park Road should make things a little safer for cyclists. 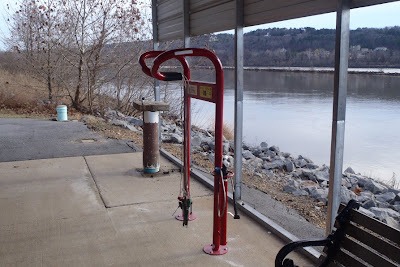 CARVE Club donated this work station to NLR Parks as a service to the community.
There are a lot of other things to be thankful for, but these came to mind. Though we're all taught to be grateful, not everything received at Christmas is appreciated. As a stubborn child, I was often threatened with getting a bag of switches, which is the equivilent to the more universal  lump of coal. I clearly understood the negative implications of switches, but, having never seen a lump of coal, would not have been intimidated by the threat of one and might have thought it a cool curiosity. These days, we all know that the ol' lump of coal isn't worth squat.
The Lump Of Coal 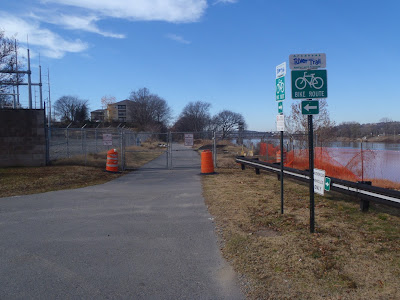 Dead End: Still no resolution for the Little Rock Cathedral School/Dillard's trail gap.
Our lump of coal is the lack of progress on closing the Moronic Mile trail gap. A few hundred thousand dollars was spent on a plan and a nice presentation seeking federal transportation funds for the elaborate River Bluffs project, but that was a long shot bet and came in like most long shots do; a loser. Maybe next year will bring us a viable plan to support cycling traffic along this stretch of LaHarpe Blvd, but in the meantime I'm going to enjoy playing with the gifts we've got. It has been a good year.
Posted by JBar at 10:04 PM