Along The Trail: Projects

The ride scene is pretty slow these days, as is usual for this time of year, but the lack of traffic is likely making life easier for construction crews working on various projects along the Little Rock side of the trail. A few weeks back, I noted that sewer work was underway along the stretch between I-430 and the Jimerson Creek bridge. It must have been determined that the old line wasn't repairable, so Little Rock Wastewater has a contractor on the scene. 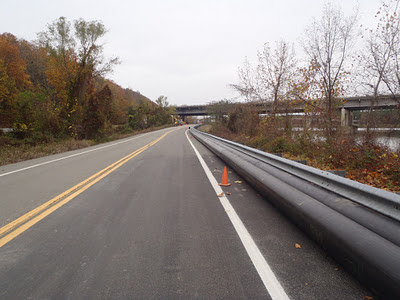 Last Saturday, new pipe was staged along the sides of the trail in preparation for the job. 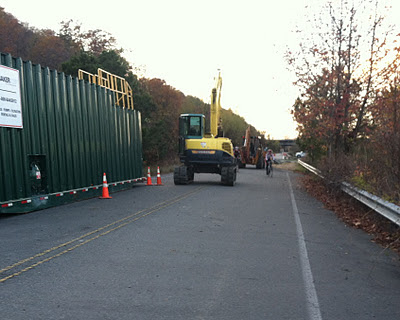 The new sewer line is now being run south of the road bed, but equipment will be present and construction will require that some areas of the pavement will have to be excavated. Crews have been instructed that the trail is to remain open, but expect to be routed around work zones. Be alert! 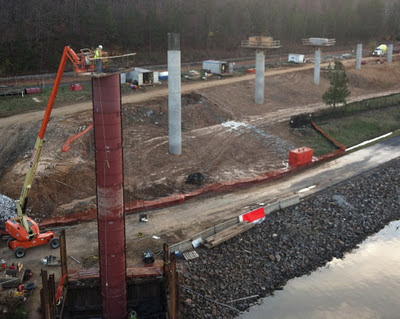 Just downstream, work continues on the west ramp of the Big Dam Bridge. The piers are near-complete and when I went by Thursday evening crews were making sure that this one was vertically true in preparation for pour the concrete base. 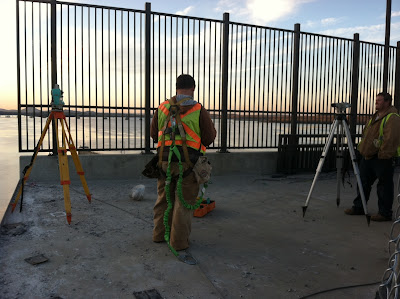 These guys are seeing that they've got it right from their vantage point on the BDB.
If things continue on schedule, the steel beams for the ramp should be delivered around the end of the month and then we'll start seeing some horizontal structure. I appreciate the fact that Little Rock and Pulaski County are both committed to keeping the trail open during these projects. I spoke to some of the workers on the sewer project and it would be much easier for them to just close the trail for a couple of weeks, but they were cheerfully accommodating. 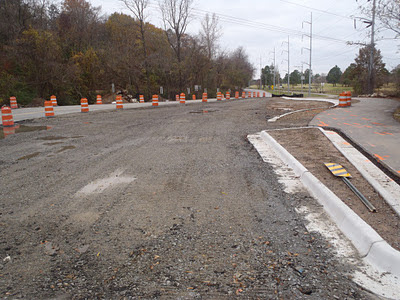 Work continues to progress on the traffic circle at Rebsamen Park Road and Riverfront Drive.
The large rocks that can be seen to the right of the trail in the photo above had previously protruded out onto the trail, narrowing the passage at a point of limited sight distance. Thanks go out to Assistant City manager Bryan Day for helping to get that corrected.  The River Trail seems to be a near constant work-in-progress and I have great expectations for more improvements to come about on the Little Rock side of the world. In addition to some additional funding from the recently passed sales tax, there seems to be a greater awareness in city government of the benefits of improved bike and pedestrian infrastructure. Thanks go out to officials like Bryan, an active Little Rock Bike Friendly Committee, and some vocal concerned citizens who are helping to keep bike issues on the front burner.
Posted by JBar at 5:54 PM