This ol' spaceship is flying through spring and heating up on the way! For some reason, I don't think I'm alone in feeling like we're hurtling through spring at an outrageous pace! It's still March and our daffodils have come and gone, dogwoods have been in bloom for a week or two, the irises are magnificent, and I've mowed the yard three weeks in a row. I'm resisting breaking out the sleeveless jerseys because I know I'll be rotating through that limited selection all summer long. It's nice having some May in March, but it makes me wonder what the summer will bring.

Saturday in the boat


The weather has been perfect for riding except for a couple of days of flooding rain and I've had a hard time staying off the bike, but Saturday was a textbook day for boating. Diane and I had invited our new friend Carol to join us in kayaking the Cossatot River, so we headed out early to meet friends and arrange a shuttle. 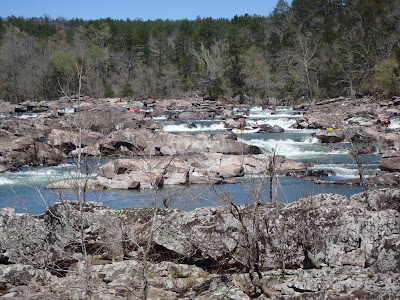 The Cossatot Falls can be a challenge for unskilled boaters, but are hard to beat for scenery, particularly on days like this.

The water and the day were nothing short of spectacular, and we hooked up with some new friends from Texas and Little Rock boater Gordon Kumpuris. Once on the river, it was old home week for Diane and me as we ran into a lot of old friends from around the region. Blue skies and predictable high water combine into a magnetic force that draws enthusiasts from anywhere within a day's drive to the rivers of the Ouachitas and Ozarks. 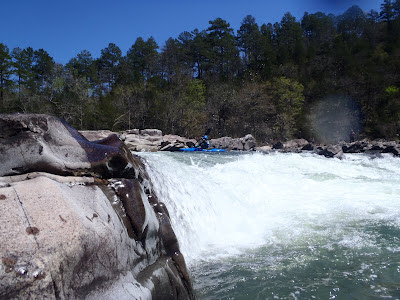 Diane in an eddy in the middle of Cossatosser, one of six named drops in the falls. The others are Eye Opener, BMF, the Washing Machine, Whiplash, and Shoulder Bone. 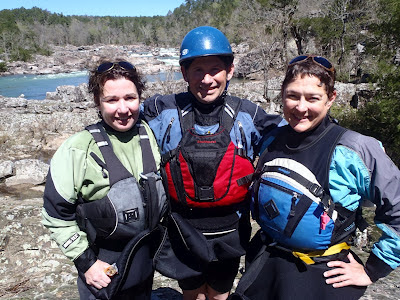 Yep, this is how I roll! Carol, left, is a very accomplished boater who claims to have lost a bit of her edge. Knowing that scouting leads to doubting, I successfully discouraged her from looking at the drops in Cossatot Falls before she successfully ran them all.

I had told our Texas companions that we often saw bald eagles on the lower Cossatot in the winter and that perhaps we were still early enough to catch a glimpse of one. As we approached the take out, Diane called our attention to a mature eagle circling above the Hwy. 278 bridge, marking the end of a textbook day on the Cossatot River.
The day of hard play on the river left me tired to the bone. Many folks assume that boating is all about the upper body, but you're literally joined to the boat at the hip, so active playboating takes a toll on your core and lower body.

Sunday on the bike

I was a slow moving machine on Sunday morning, laying in bed well past awakening as I savored the feeling that comes with well-earned exhaustion, but the draw of sunshine soon pulled me out. I eased out on the bike, subconsciously blowing off my ambitions for a long ride as I met up with my buddy Sam and cruised out to Two Rivers Park. Sam had commitments, so I soon found myself out on Pinnacle Valley Road, somewhat committed to my favored Barrett-Garrison Loop. 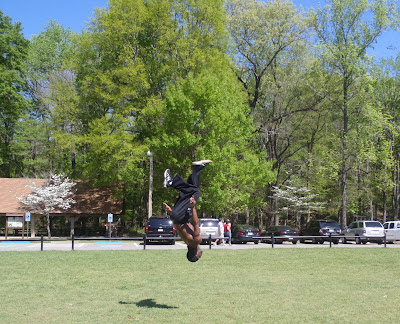 I stopped in at Pinnacle State Park for water and noticed this guy doing some amazingly acrobatic stuff. His name is Reggie and he's been practicing martial arts for 23 years, since the age of 8. I watched and took a few photos of his workout and was blown away by his abilities. 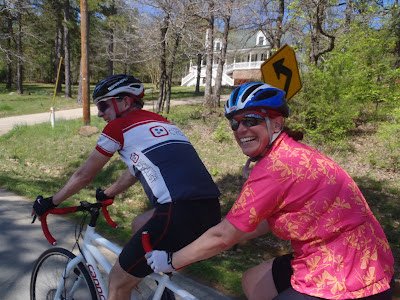 As I headed out Barrett Road, I spotted another bike approaching on Hwy 300. It turned out to be Stephen Tucker and Meredith on their tandem. Meredith had had a tough week and threatened to simply unclip and open a beer. 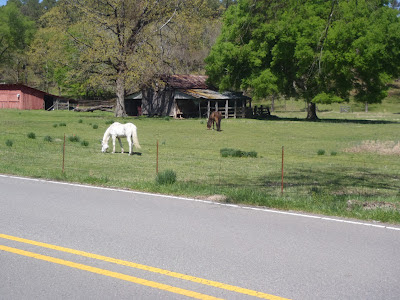 It's easy to find rural scenery within easy riding distance of the city.

About 35 miles into my ride, I felt like I had overreached but I was still over 20 miles from home and the hills of Pleasant Valley were faced with a little dread. The ride was not particularly long or hard, but I had started the day in a state of moderate exhaustion. The result was a satisfying but totally draining effort that ended with a hot shower, a tall glass of chocolate milk and a nap in a recliner on the porch before I could muster the energy to cook some real food and start my recovery. Good stuff, and a reminder of the range of outdoor opportunities that we have here in Central Arkansas. Just get on the bike a choose a direction.
Posted by JBar at 9:36 PM

Thanks for the good read, you really help my work day go by.