Well, spring has swept down upon us in full force here in Central Arkansas, with heat and humidity more like May than March, flowers abloom, pollen covering everything, and riders taking to the local trails and roads in droves.
With that surge comes the usual list of complaints from walkers about cyclists, cyclists about oblivious walkers and , of late, equestrians feeling that they are getting short shrift as complaints come in to local authorities about horse poop on various trails. I was a little curious when I noticed that an article posted here early last fall had suddenly shot to the top of my "most visited" list. I had been contacted by the NLR Parks folks about mountain bikers' view on horse manure on the Burns Park trails, so I knew there was an ongoing discussion, but I didn't realize that it was actually coming before the NLR City Council. Most of the debate centered on whether the pile in the photo used for the article was a natural deposit or a composite. I will say that it is an awesome pile of poo, but Bike Nerds have better things to do than doctor up feces photos. I will also say that in my informal survey, local mountain bikers were very supportive of the horsemen and appreciate the fact that we share the trail. In spite of my somewhat snarky article, I find that riders of horses and mountain bikes get along very well here, which is not the case everywhere. In many places, horsemen fight to keep mountain bikes off of what they consider to be "their" trails, resulting in ill will between the factions. I think that we can all get along with a little mutual consideration. 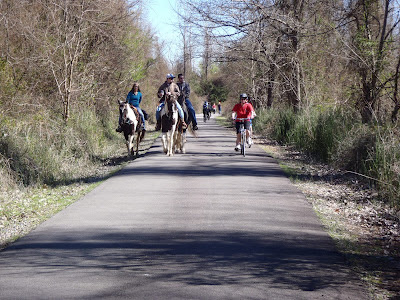 Some folks would say that a busy Saturday is not the best time to ride horses on the paved trails of Two Rivers Park. I don't have a problem with it, but the horse community will have to take the complaints that will certainly arise from some faction, just as cyclists do. 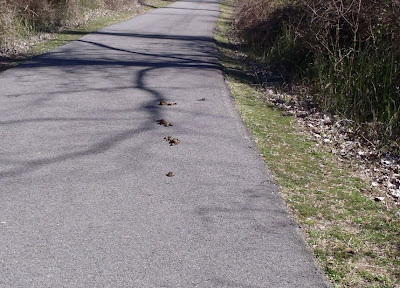 No matter how well-behaved horses and horsemen are, they will get complaints over scenes like this. Cyclists generally leave no trace behind. Even mountain bikers.

Horsemen will have the same image problems resulting from scenes like this that cyclists suffer as the result of a few bad actors. Just as a racing cyclists can make an impression on trail users over miles along the trail, static reminders like manure on the trail can offend walkers for days. I'd rather see this than dog poop, but that sentiment is not universally shared.

Other Trail Hazards
Riders, walkers, and horsemen aren't the only critters drawn out by the spring weather, as our local cottonmouths and copperheads often find comfort on the sun-warmed asphalt of the trail. 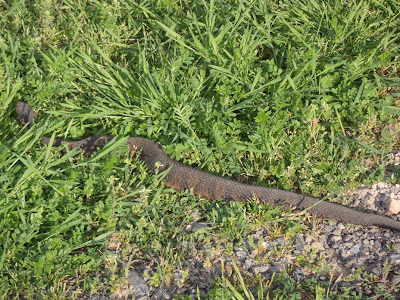 I ran across this big cottonmouth in Two Rivers Park and encouraged him off the trail. 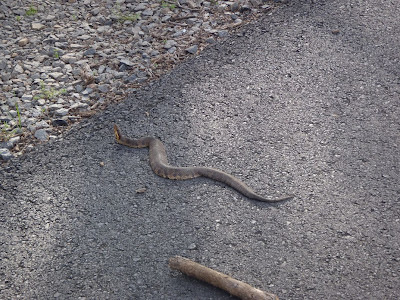 A couple of hundred yards further on, I stopped to remove some sticks from the trail before realizing that one of the sticks was this fellow. The sticks had been placed by a walker as warning about the snake, who seemed determined to stay put.
Cottonmouths seem to range in temperament from cranky to aggressive and are not to be trifled with. Copperheads are more reclusive and much less likely to be seen, which can result in accidental encounters as people put a foot or hand in range of an unnoticed snake.

Work is progressing nicely on the plaza at the foot of the Two Rivers Bridge, with the arrival of landscaping plantings and the installation of sprinkler and water systems. 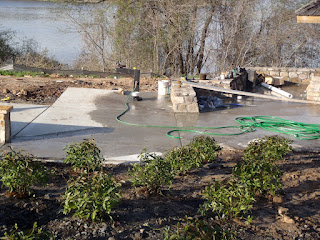 I'm glad to see the water fountain in place.


Folks, we're bound to have the usual complaints and conflicts along the trail, so let's not take ourselves or others too seriously and just ride friendly. We've got some great resources to share and there is plenty of room for all of us.

Good comment about the snakes, I saw two Friday evening.