We got another bump of rain along the Arkansas River valley last night, but according to the latest river stage data the Arkansas is cresting Friday night and should begin to recede barring more rain or water releases upstream. 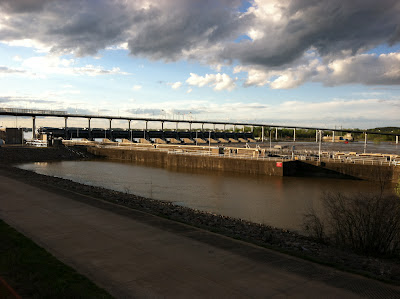 I've only seen the gates wide open a few times over the years, though I'm told by a more informed authority that they are opened fairly often for short periods of time. 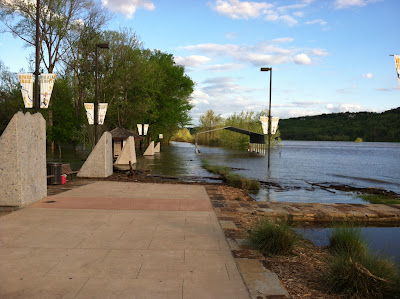 Parts of the trail are inaccessible, but I don't expect the water to get to the foot of the bridge.

On Friday afternoon, the River Trail was flooded below the BDB, but I assume that the North Shore Trail would allow you to get as far as the gate into Burns Park from the deer fields, where water was already bottom bracket deep last night according to man in the field Mike Collier. At some stages, though the trail is flooded, you can bump through the field and reach Burns Park. The road from Cook's Landing to the BDB was also flooded, so I rode the levee, which is grass and hard packed dirt. Once across the Big Dam Bridge, everything on the Little Rock side and Two Rivers Park is dry. Should be a great weekend, so hit the road!
Posted by JBar at 10:47 PM