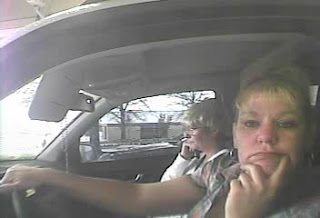 These lovelies are thieves. Photo from Arkansas Times site.

There were reports this morning in both the Dem-Gaz and on the Arkansas Times blog about two women who have been breaking into cars at Two River, BDB and elsewhere. Let's see if we can help catch the bitches!
Follow the link to the Times blog to get the details on the car they are thought to be driving. Let's be alert. If you see these gals, call LRPD Detectives at 918-3532.and snap a photo or two to put them at the scene. Car break-ins have been an ongoing problem along the River Trail, with many occurring in broad daylight with many people around. As a community, we can help change the impression that we're easy pickings by aiding the police in catching the scumbags.

Update: Minden reports they are now believed to be driving a silver 2012 Chevrolet Equinox, with Georgia plate number BVS3641.

I guess still keep an eye out for the benz too in case they switch yet again.