Flooding On the Trail

Expect flooding for the next few days along the North Little Rock River Trail. Water was on the trail in a few places Thursday evening, and rising rapidly. The S-turn bridge was well under water by the time I passed, as was the trail near Victory Lake, but the Cunningham Lake / North Shore Trail was open, as was the road past the dog park. I would not expect that to last. I would expect the trail to be impassable just west of the soccer fields and the gate to the deer field, as it is known, at the least, so be flexible in your ride plans. The river is supposed to crest Saturday if we don't get much more rain, so expect flooding through the weekend. Consider it an opportunity to learn your way around Crystal Hill Road. 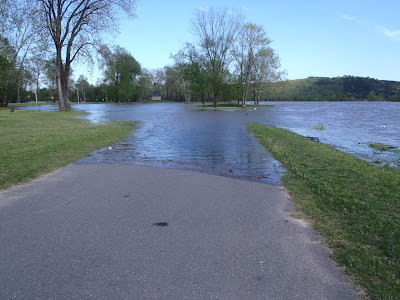 This is just the beginning of this trail flooding event.

Some of the extended high-water periods of past years have temporarily reshaped the cycling community by isolating riders or forcing them to change their routine due to trail and bridge closures. It really made for some fun pick-up rides with folks that you know or have seen around but don't normally ride with.
Be careful. Look out for snakes if you ride through water. I didn't see any snakes, but I did see a lot of bugs being flooded out of the grass and a big carp swimming next to the trail.
Posted by JBar at 10:08 PM

;) I've switched over to my other secret training route, but if I do hit the Rivertrail... http://3.bp.blogspot.com/_Hh9HzyPVSxw/SWYNfGKKloI/AAAAAAAACjA/rmd5rnOfQZ8/s400/bike-kayak.jpg