Wow! What else can I say about this past weekend in the Little Rock area?! It was huge, and I didn't even participate directly in the two big events, the sold-out Jimmy Buffett concert and the Little Rock Marathon, though I did sniff around the edges of both. Things got started at 8:00AM Thursday when the gates opened for the Jimmy Buffett tailgate party along the flood wall in downtown North Little Rock. I've been to a lot of rock and roll shows, but I've never seen the city roll out the welcome like they did for the Jimmy Buffett circus-come-to-town! 20,000+ folks went full Parrothead long before the first notes were played in Verizon Arena. I didn't plan to go to the concert, but I wanted to check out the party. I didn't dare try to park anywhere close to downtown, so I rode from Burns Park after work and found festivities to be in full swing. A good vibe and spectacular weather set the background for what seemed like just a very large party among friends. 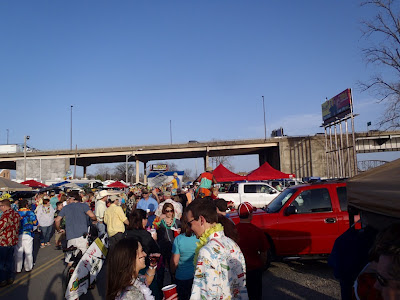 The crowd was large and lively in the warm-up for Buffett's show, and it was pretty easy to discern the veteran Parrotheads from one-day islanders. The heads above the crowd are those of two cyclists on VERY tall bikes. They had my respect, because I couldn't pedal through there without putting a foot down. 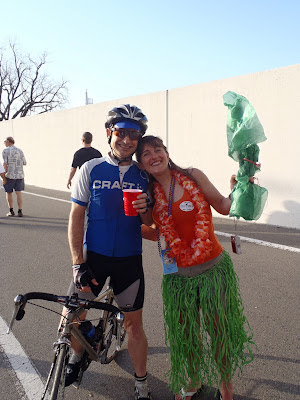 Why is this man smiling? Friend Chrissy Fox allowed me to hold her beer. Beware of Parrotheads bearing roses!

The Margaritaville Tailgate Party was hosted by The Buzz 103.7 radio, the City of North Little Rock, and the Chamber of Commerce among others, and it was a roaring feel-good success for Central Arkansas. Traffic was obviously going to be a mess, and folks were fairly warned to expect some inconvenience, so I was surprised to hear of a couple of grumbles about the River Trail being closed. It was easy to pop out on to Riverfront Drive and go to the Clinton Park Bridge, so trail traffic was only slightly rerouted. We'll have to deal with big events just like we deal with Riverfest; by the time we can get irritated about it, it's gone away, and the river front is a great place for a big party! 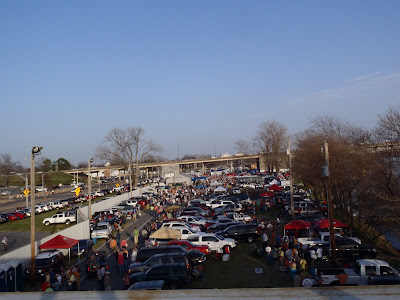 The outskirts! The crowds closer to the RV park to the west were too thick to navigate with a bike, but the street outside the flood wall was open.

I didn't stay for much of the party and didn't see the concert, but I'm still glad that Buffett came to town. It just felt good.

The marathon brings thousands of guests to central Arkansas and I think that they are almost always impressed. The event is run with precision, covers a challenging course, and gives the biggest damned medal that you ever saw! The neighborhoods along the route turn out and wrap much of the route with a festival atmosphere, though I was surprised at the lack of folks in the long flat stretch along Riverfront in Little Rock. Local rock star Leah Thorvilson won her fourth consecutive women's title and told the TV news that she'd been training her ass off and was ready for some beer. You go!
Along with a team of other local cyclists, I rode in escort of some of the runners. I'll admit to having ridden the entire course in previous years, visiting and encouraging my running friends along the way, but then two years ago, some of us were asked to escort the wheelchair and hand cyclists. That was well received and expanded, so that there are cyclists scattered along much of the course, helping keep inattentive folks from impeding the runners and also serving to quickly alert emergency personnel if they encounter a runner in need of assistance. 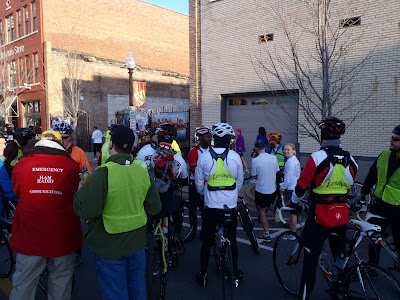 The bike escorts included, among many others, several riders from the Spokes mountain bike team. Somehow, Chris Randle is always front-and-center when the camera comes out. Robert and Bethany Mooney are ready to run and are probably telling these guys to stay the hell out of their way. 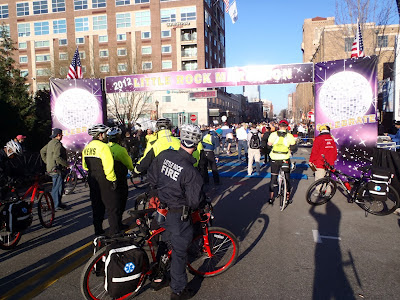 Bikes belong! MEMS also had EMTs on bikes at the Buffett party. I can't think of a better way to get a first responder to where one is needed in a crowded urban environment. 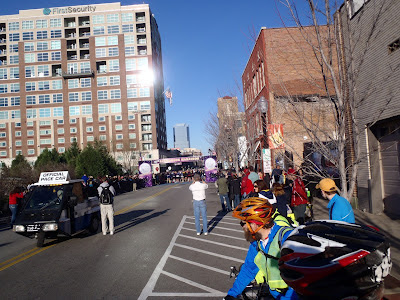 The start. Everybody was ready to go! 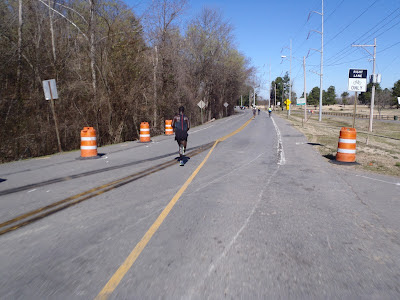 Fast forward to about mile 20. These two runners would finish first and third. I stuck with my guy to the finish, arriving to the cheers of the large crowd of race fans.Oh? They weren't cheering for me? OK.

I somehow failed to get any pictures of the finish, but close your eyes and visualize a large crowd of happy people, some of them quite tired, under clear blue skies. Nice!

Central Arkansas was just a very nice place to be over the last weekend. If you're local and you didn't enjoy it, then you just need to try a little bit harder!