Immediate Hazard And A Troubling Report 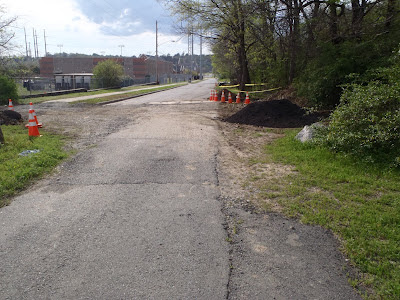 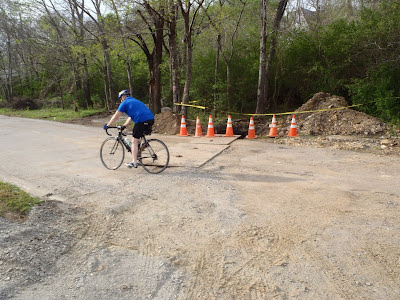 Yes, it's been less than a week since a cyclist was struck by a car ( read details at Tim McCuin's MoveArkansas blog) as she tried to negotiate the patchwork of sidewalks, one-way streets, and driveways that represent a bike route past Episcopal Collegiate and then on Sunday, we were greeting with this hazard. As I stopped to take this photo, a pair of cyclists approached from the east and Diane noticed that one of the riders flatted as her wheel struck the edge of the steel plates.

While I'm still awaiting details, a reliable source told me that recently a cyclist was struck by the mirror of a passing car on Resamen Park Road. The "insult" part came when the cyclist, who was not seriously injured, was held responsible for the incident because he was riding too far out into the traffic lane. Hmmm...what about that state law requiring that motorists allow 3 feet when overtaking a cyclist on the road?   Here's the statute on passing cyclists:
27-51-311. Overtaking a bicycle.
(a) The driver of a motor vehicle overtaking a bicycle
proceeding in the same direction on a roadway shall
exercise due care and pass to the left at a safe distance of
not less than three (3) feet and shall not again drive to the
right side of the roadway until safely clear of the overtaken
bicycle.
(b)(1) A person who violates this section shall be
subject to a fine not to exceed one hundred dollars ($100).
(2) A person who violates this section with the
violation resulting in a collision causing death or
serious physical injury to the person operating the
overtaken bicycle shall be subject to a fine not to
exceed one thousand dollars ($1000) in addition to
any other penalties prescribed by law

This is likely what would be relied upon to find the cyclist at fault:

32-489. Riding on roadways and bicycle paths.
Every person operating a bicycle upon a roadway shall
ride as near as to the right-hand side of the roadway as
practicable, exercising due care when passing a standing
vehicle or one proceeding in the same direction. Persons
riding bicycles upon a roadway shall not ride more than two
(2) abreast except on paths or parts of roadways set aside
for the exclusive use of bicycles. Whenever a usable path
for bicycles has been provided adjacent to a roadway
bicycle riders shall use such path and shall not use the
roadway.
(Code 1961, § 39-117)

Given the usual condition of the bike lane on Resamen Park Road, I'm curious as to what standard was applied to determine how far right is "practicable".  I hope for some follow-up on this incident. I did find that a police report was filed but have not elected to spend 12.50 in order to satisfy my curiosity.

On the brighter side...
The bypass trail west of the BDB has been patched. This temporary trail will not meet the same standards as permanent construction, but thanks to the folks at Pulaski County for responding to the need for repairs.

This kind of stuff makes LR look so bad, especially when it comes to trying to win a "Bike Friendly" award. What's the current "Bicycle Advocacy" doing about this?

And folks thought I'm a control freak because I kept telling these folks they were working on the wrong stuff ;-)

I meant this "cyclist was struck by the mirror of a passing car on Resamen Park Road. The "insult" part came when the cyclist, who was not seriously injured, was held responsible for the incident because he was riding too far out into the traffic lane." when I left the previous comment and yes in my opinion you're working on the wrong stuff, LR needs Bike Lanes so the above doesn't happen.

After rereading this DOH! I just noticed the street name, for some reason after seeing all the photos I thought it happened on Cantrel by the School.