Wednesday: Specialized Mountain Bike Demo
by Arkansas Cycling and Fitness
Here's a chance to go out and rock the new Spec' Epic you've been lusting over on your home trail. 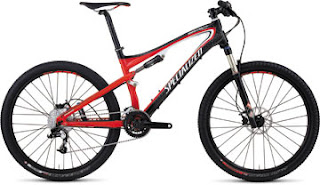 Specialized MTB demo
4/4/2012
Specialized Mountain Bike Demo is next Wednesday (4/4) from 3pm to 7pm! There will be both men and women's mountain bikes for you to test ride!. We will be in the parking lot by the boat ramp on Burns Park (Tournament Dr). Please bring your ID, credit card, helmet, shoes, pedals. See you there!

Many folks have expressed frustration about the state of BACA and its role, or lack thereof, as a broad-based cycling advocacy group. Well, it's easy to complain from the sideline, but that's not where the action is! Shuffle on down to the Oyster Bar on Thursday night and cast a ballot for the candidate of your choice in the election of BACA officers! Since people usually have to be coerced into taking on such demanding and often thankless positions, I expect there to be much less vitriol than a Republican primary and a few more beers. Joe Jacobs over at Arkansas Outside gives the subject a more in-depth treatment here.
Posted by JBar at 9:11 PM