There has been a lot going on in the cycling community in terms of advocacy, progress on some projects, races and, most importantly, a lot of absolutely perfect riding weather.
I got out Tuesday night and joined the Major Taylor ride group for a little spin, along with my friend Chris Irons. The story of Major Taylor is a fascinating one. Last year, in preparing for an article about the club that I never wrote, I went to the NLR public library to find a biography. I ended up in the "children's nonfiction" section, where the small furniture and decor made me feel kind of creepy as I searched by the Dewey decimal system. I think the only book on Major Taylor that they had was for "third grade and up", so it had my demographic covered. Anyway, Chris dropped his chain on the first climb in Burns Park, so I stopped to assist him. This is an old sandbagger's trick to allow one to avoid an ass-kicking on a group ride, and one that I would never employ. We rejoined the bunch and headed to the newly paved Fort Roots climb and we noticed that there were groups of riders everywhere! At least 12-15 people came down Fort Roots as we climbed, and there were groups scattered all over the trail system. Let's all be sweet to others on the trail. It's early in the season and group rides are the frequent target of complaints, not matter how well the riders behave. Most of the complaints are unfounded, so let's keep it that way! 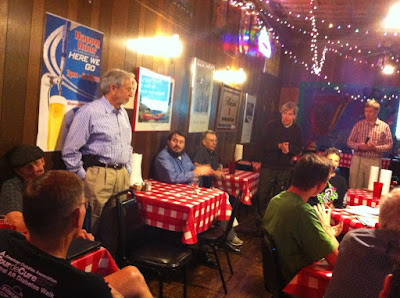 Elections were held for a slate of new officers and board members for BACA. The newly elected officers include Tim McKuin, President, along with Bryan Shipman, Chad Cragle, David Paoli, Judy Lansky, and John Gillam. It will take a while for the new team to gain some direction, but I'm very pleased with the varied cycling interests that are represented. Tim's focus on transportation is evidenced in his MoveArkansas blog, and other board members are involved in mountain biking, racing, recreational riding and even bike polo. With the experience of long-time BACA folks like Gene Pfeiffer and Judy, I have expectations that BACA can once again become the inclusive, broadly representative voice of cycling that it was founded to be.

Trail Work
Mountain bikers have been busy doing trail work in local parks. In case you think that trails just get built and maintained on their own, it's time to think again! 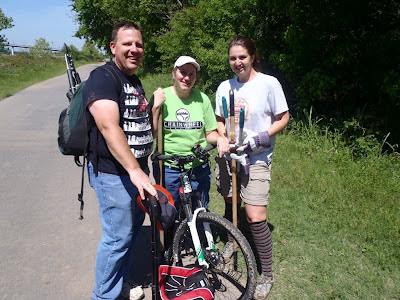 I ran into this trail crew as i returned from the Log Cabin ride last weekend. David and Susan Paoli, along with Laura Wooldridge, had spent their Saturday morning clearing brush, logs, cottonmouths and mosquitoes from the Pfeiffer Loop. I don't think they got all of the mocs and skeeters.

David and Susan Paoli had just cleared the Pfeiffer Loop prior to the recent flooding and they were back at it again last weekend, with racer Laura Wooldridge pitching in as well. I also got the word that Team Spokes has done a lot of work at Allsopp Park.
If you're a mountain biker and you see something along the trail that you can fix, stop and fix it if you're able. I usually have some hand pruners in my hydration pack for the purpose. While you don't need to head into your local State Park with a chain saw, most of the trail building and maintenance is done by volunteers who like to ride and know that it takes some work to have a quality trail system..

The traffic circle at Riverfront and Rebsamen Park Roads is nearing completion, along with extended bike lanes. It appears that the bike lane westbound from Riverfront has been extended further east that I expected, which is a very good thing! 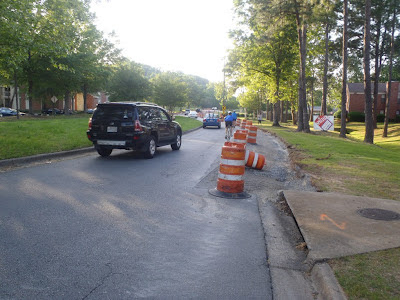 I had understood (and complained about) that the bike lane extension from the new traffic circle would only extend to the apartments in the background. It now appears that the lane will be extended through the narrow section currently created by the median and the single traffic lane.

While I will continue to point out issues that I think need attention, I've got to give the City of Little Rock some credit. They're trying!

Side Note: Several folks have asked me about the tree cutting along Murray Park. The trees that were within "falling range" of the utility lines are being cut to prevent damage to the lines. Ice storms and tornadoes have hit the area in recent years, so this is s preemptive strike.
Posted by JBar at 5:01 PM

good progress on BDB. Not so much at round a bout. Any idea when Round a bout will be complete? what about possible repaving of rebsamen park rd?????

I stopped at the roundabout on Sunday and the progress has indeed been slow! I'm not sure what the hold-up is.
As for the repaving, Asst City Manager Bryan Day reiterated the commitment at a recent meeting of the LR DFC committee, but there is no schedule of which I am aware. I'll continue to follow that project.