I contacted LR Parks last week regarding the overgrown brush along the trail between Two Rivers park and Jimerson Creek. I was told that crews were scheduled for the work and it was soon a done deal. 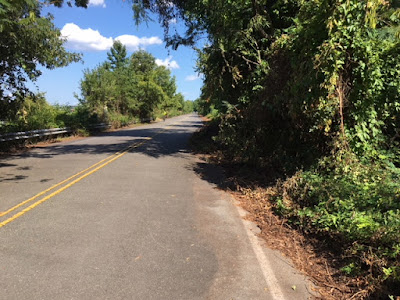 After the work: There is still some welcome shade but head-level brush has been removed. 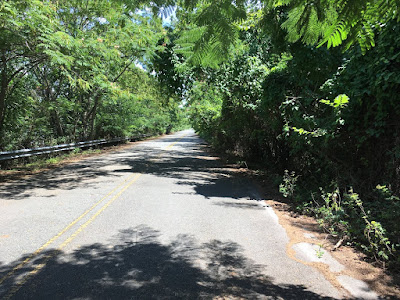 This is the "Before" shot.

As of Tuesday night, the paving project at the Little Rock River Trail-Broadway Bridge ramp was partially done and it appeared to be no more than a day away from completion; however, rain was approaching as I visited the site and continues as I write this on Wednesday. 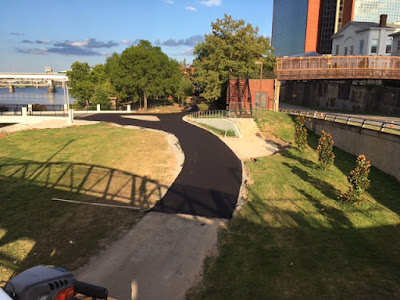 Pavers got a good start on this project before rain set in. Nothing rides like fresh asphalt.

Restrooms at The Sub

After a storm drain collapse and other issues required closure of this restroom and excavation of the nearby trail, there was a few weeks of activity followed by months of.....nothing. 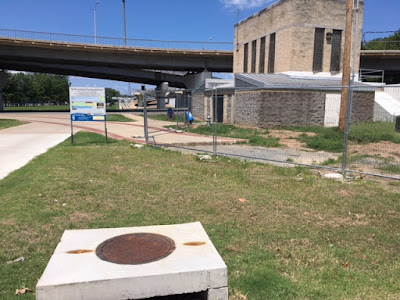 The bathrooms have been repaired but policy has changed on leaving them open.

After making a few inquiries with my usual sources I pieced together what I believe to be the current status of this facility. The restrooms have been repaired and are again functional. A steel grate gate has been added to the foyer area for added security. From what I was told, control of the restroom has been turned over to the folks at the adjacent Maritime Museum, and the restrooms will be opened during tours, concerts, mass rides, and other area events.
Unfortunately, ongoing damage and defiling of this resource by the many homeless folks who frequent the area make leaving it open impractical. While I'm sympathetic to the plight of these urban campers, I have a bit of resentment for the fact that we can't have freely used public amenities due to these abuses. The situation has been much the same at the skate park up trail. In that case, it seems that some the teens who frequent the park can't refrain from vandalizing a facility that is there for their convenience.
Fencing remains in place for the short trail section that was excavated, and River Trail traffic is detoured through the parking lot. While a contractor repaired the underground lines, the repaving of the River Trail was left to the NLR Street Department as a cost-saving measure. It remains on their "to do" list as other projects take priority.

A riding writer has got to eat! Heifer Project Café

I have to give a periodic shout out to the Café at Heifer Project International. Many people in Central Arkansas are aware that Heifer exists, though for many it's just "that building over by the Clinton Library." Relatively few folks are aware that the Café at Heifer is open to the public, serves a lot of locally farmed produce and meats, and boasts one of the best burgers in town. It is convenient to downtown without the parking hassles of other nearby venues.
While gather information and taking photos for a recent article, I rode over for lunch. I was of good appetite and chose the Smokehouse Burger with house made chips. While  delicious, I had second thoughts as I wallowed through another 25 miles on the bike on a hot July day. Ugghh..  Try this burger but time your lunch for the end of the ride or for a drive up visit. 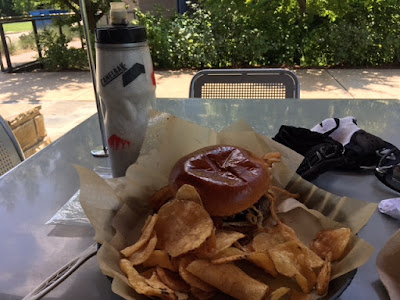 The Smokehouse Burger-delicious but perhaps not the best choice for a hot ride.

I eat at the Café pretty frequently, enough so that I'm often asked if I should get the employee discount. The food is always fresh and well prepared, the parking is convenient (incredibly so for cyclists), and the price is right. 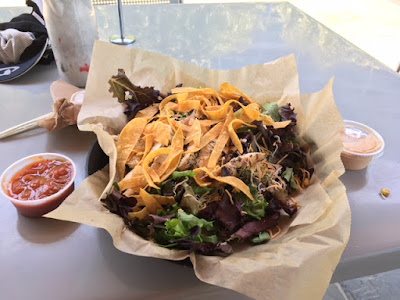 The Southwest Salad with chicken. A better choice for the ride. 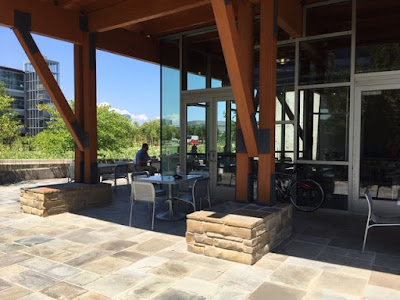 The Heifer Café offers indoor and outdoor dining along with convenient parking.

If you drive to Heifer, I suggest parking at the very back of their lot near the loading docks and the alpaca pens. There is a bike rack that is in sight from the restaurant, though I often just lean my bike near a table.

I plan to check out some other dining opportunities along the trail as time goes on, with secure bike parking being a requisite.