Along The Trail-Bathrooms, Brush, and Broadway Bridge Ramp

Perhaps it is just because I'm back to riding more consistently and seeing more of my old readers, but I've had quite a few inquires about JBarCycling of late. Some folks actually miss the information and attempts at entertainment while others have yet to notice that I stopped writing regularly a year or two ago.

I've decided to turn the lights back on dust off the keyboard here in the JBar Bunker and see where it leads.

"Along The Trail" has been my header for general articles about happenings and situations along the Arkansas River Trail so it seemed appropriate to begin on familiar ground. As you can see, I've retained my penchant for alliteration.

The bathrooms at Cook's Landing have been closed for a while and it appears that the closure may be permanent. I'm told that the sewer line serving the facility has collapsed and that repairs would be in the $50,000.00 range and would require extensive excavation. The bathrooms may eventually be replaced as the current ones are outdated and, frankly, have been nasty for years. There are facilities at each side of the nearby BDB so this should not be a burden for cyclists. If you've used it for a change shelter, now is a good time to learn how to dress in public places while wrapped in a towel. 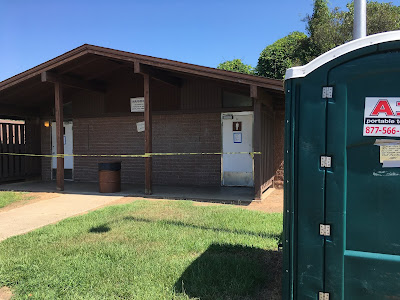 Don't expect these restrooms to be open any time soon. 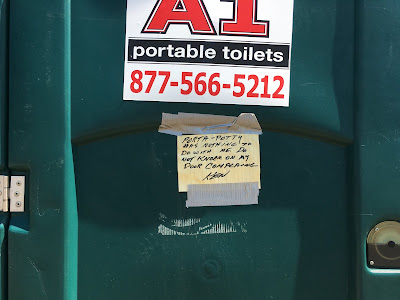 And don't ask Ken, the site host, about it. The portable toilet is actually cleaner and more pleasant then the restrooms here. There is still a working water faucet behind the pavilion just across the street. 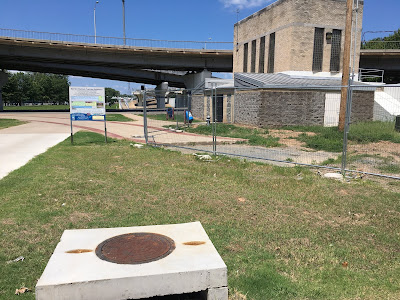 The restrooms at North Little Rock Riverfront Park has been closed for months due to a collapse of adjacent storm sewers. This is a little more problematic than the Cook's closure as there are no nearby facilities. Work in the area has stopped.

Brush Along The Trail -BDB to Jimerson Creek

Brush and trees are once again effectively narrowing the River Trail near Jimerson Creek. After being driven into a face-slapping tour of the overgrowth by a fast pace line, I reached out to my contact with Little Rock Parks. Work should start this week on clearing back the brush and be completed by next week.
(Slow down here, guys. Your actions reflect on all of us. Save it for the road) 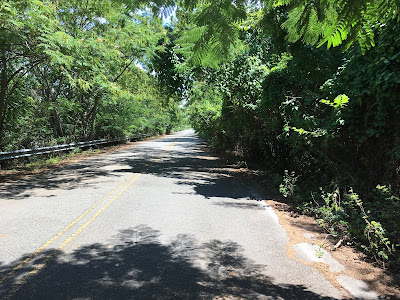 Overgrowth has narrowed this stretch of trail but LR Parks will be on the scene in the next few days.

We noticed tree trimming crews working along County Farm Road on Tuesday, clearing overhanging branches and brush from the bike lanes there.

I ran into local cyclist Tom Burks last week and joined him for a ride over the Clinton Park Bridge, behind the River Market, and through the sculpture garden to the Broadway Bridge. it was an interesting break from just rolling down the trail, and I've made the loop a couple of times since. 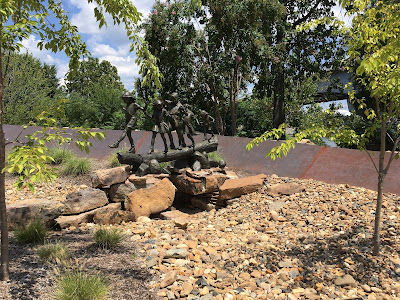 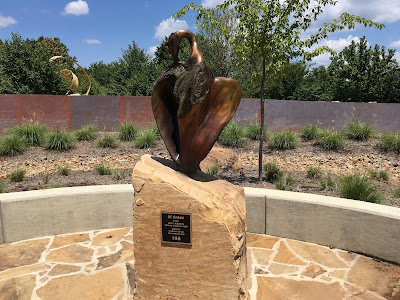 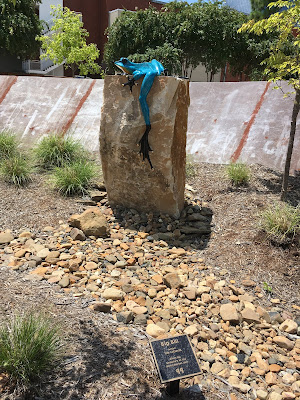 The River Market Sculpture Garden allows you to add a bit of art appreciation to your ride.

I've run into some construction detours in the area, but they are well marked and have not been an inconvenience. That had changed today as I tried to reach the Broadway Bridge ramp along with my newest trail friend, Lisa T. We were both probing for a way through, only end up taking a forced detour over to Markham Street and back to the foot of the bridge. 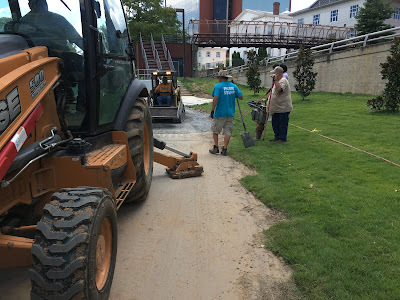 The guys on the crew said that the pavers would be here soon. Expect the ramp closure to continue for a few days. 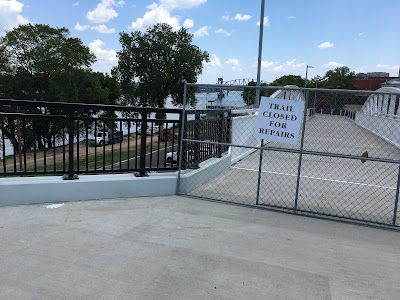 The closed ramp was more apparent from the bridge.

If you enjoy getting this kind of information on the Central Arkansas cycling scene and think others would appreciate it, please share. While I don't understand current Facebook algorithms, I'd like to reach more than my current contacts. I always appreciate comments and questions. If you see something that needs attention, let me know and I'll do my best to do the research and report what I find.

Thanks for the info and your efforts!!

I don't see how to do just a comment but the ramp up the bridge was announced to be closed for three weeks to complete the work. Thanks for the Blog update I have miised your postings :)

Nice to see things get back to normal. I missed the River Trail Reports.

I am so glad you re back!