Snakes alive! They slither among us.
While it is common to see venomous snakes along portions of the River Trail, the cottonmouths were out in numbers on my Tuesday midday ride. The first one I saw was making good progress across the trail so I just observed until he was on his way back to the swamp. ( The real swamp--not the one festering in Washington.) 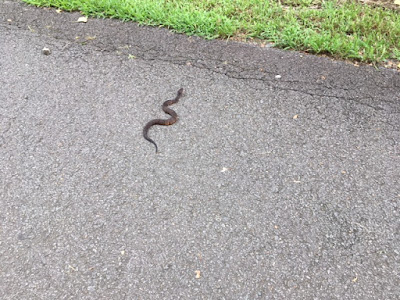 This stubborn little fellow took a break in mid trail, stopping traffic. Someone tossed a few rocks to try to encourage him but he was unimpressed. I moved beside him to take this photo and he finally moved on. 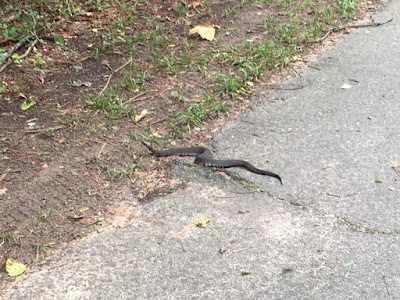 This impressive specimen seemed to like this spot and was hanging out as I took this picture. I was also watching an oblivious runner approaching in a direct path to the snake. I started yelling at the runner but he was head down, apparently with ear buds on high volume. I was virtually screaming at him when he finally looked up. 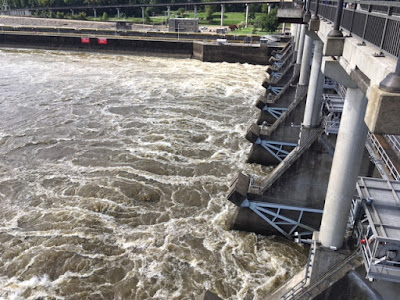 Heavy rains upstream mean that the river is back to some high flows and the backwaters are flush.

I don't know whether the snakes are out in such numbers because the recent welcome cooler weather makes the warm trail more attractive or if they have been displaced by recent heavy rains, but they are more active than usual. If you encounter snakes on the trail, the best advice is generally to leave them alone. I often stop to caution approaching users until the snake moves on. They are driven mostly to eat and mate, so have little interest in us unless threatened.
Be alert, and I  suggest keeping kids and dogs out of the brush adjacent to the trail, especially in the marshy areas of Two Rivers Park. The snakes live there and we are just passing through.

OK, OK, I am admittedly a year or so behind on reporting this, but the addition of bike lanes along Pinnacle Valley Road north of Cantrell is a great addition to the Arkansas River Trail system. This had been discussed for years within the Little Rock Bike Friendly Community Committee ( I swore years ago to quit typing the whole name, so from now on it is back to LRBFCC) and championed by former chair Ed Levy.
In addition to the bike lanes, there is now a bypass from the traffic signal at the intersection of Taylor Loop to Pinnacle Valley Road, thanks t the cooperation of a friendly developer. 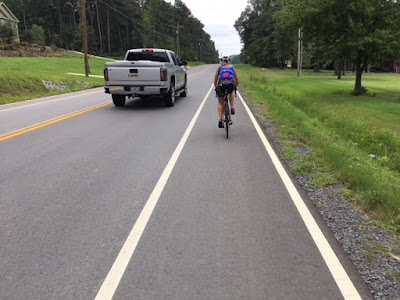 I ran into my friend and not-quite-cousin Becky Barton Dalton while I was out for a spin on Sunday. She dragged me around as she hit her 5000 year-to-date mile mark. (Kudos-that is some riding!)
This stretch of Pinnacle Valley previously challenged riders with  limited sight distance, no shoulder, and a lot of traffic. As you can see, it is a much more comfortable and safe situation today. 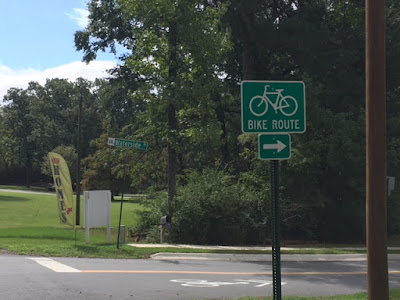 This new subdivision ends in a cul-de-sac but the developer cooperated with the community by allowing a bike path that extends to Cantrell. 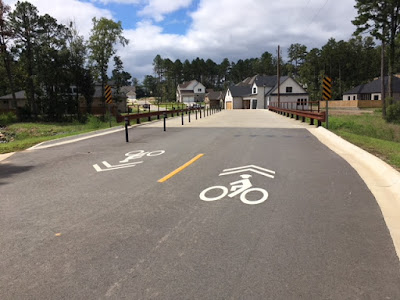 The developer apparently has expressed a little frustration that riders are not using the bike/pedestrian lane he added to this bridge. Riders tend to stick to the road but the bridge will certainly add value to his neighborhood and be appreciated by residents. Thanks go to him for the consideration.


I seldom ride that way these days, but before two Rivers Bridge opened I regularly took life in hands to ride out Cantrell from River Mountain Road or made the unpleasant climbs of Pleasant Forest to get to Taylor Loop. It was always frightening to cross 5 lanes of traffic from Taylor Loop to get the few hundred yards to Pinnacle Valley. 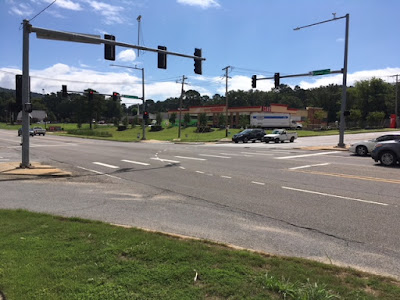 Riders coming from West Little Rock can now just cross Cantrell at the light on Taylor Loop rather than making a mad dash back to Pinnacle Valley Road. 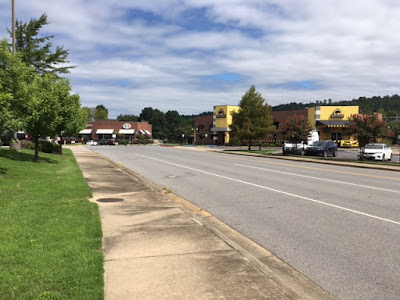 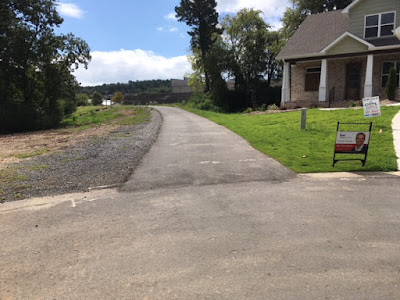 The bike path leading from the subdivision to the back of the shopping center where Buffalo Wild Wings is located.

Improvements like this do not just happen. Work on this seemingly small infrastructure improvement has been going on for many years within the LRBFCC and the participating LR city departments, along with lobbying of developers and other stake holders. There are typically months or years of boring meetings to identify a need and develop a plan. Then, those plans often don't see implementation until a street is resurfaced or some outside funding becomes available. The wheels of government move slowly and, when it comes to cycling improvements, those wheels are being pushed and lubricated by your fellow riders who invest their time for the common good.

The weather has gotten a little nicer. Go ride your bike.
Posted by JBar at 12:12 PM