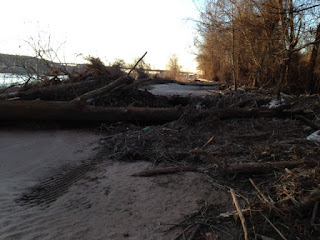 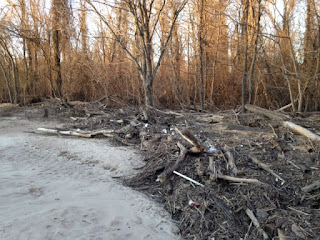 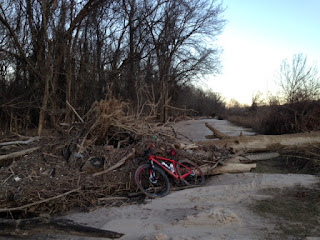 I think there is still a little work to be done before the trail is road bike ready. Thanks, Robert.

My road bike has not been seeing any action lately due to River Trail conditions, but I am getting more deeply involved with the annual mountain bike romance.
Things are still a mess in NLR and, though reportedly passable, I've received a report that the trail at Two Rivers Park is still covered with a layer of rutted dirt. I have really been enjoying Camp Robinson and, for me, it is more accessible for a short evening ride than driving to Little Rock to ride up and down Rebsamen Park Road. Feel free to add any personal knowledge in the comments section.


From the City Of North Little Rock, Jan 12:

Flood Cleanup Update: This morning, Tuesday Jan. 12th, our crews continue to work hard getting our trails and parks back to a condition where residents and visitors can enjoy them. There are still a few portions of the Arkansas River Trail still underwater, but we have heavy equipment removing the tons of sand and debris that settled when the river receded. Still closed are the soccer fields, dog park, Cooks Landing, and the Arkansas River Trail (through Burns Park.) We hope to have many portions of the now closed areas open by later this week, but that timeframe is dependent on the weather cooperating. It could just as easily be next week. Expect some detours on the trail when it does open, due to continuing cleanup by the heavy equipment.