I case you have not had any media exposure in the last several days, here is your notice that much of the Arkansas River Trail in central Arkansas will not be passable for the next week or so due to flooding.
Soaked ground, already high flows, and some remarkable rainfall totals have pushed the river to levels exceeding those that we experienced last summer.

We ain't seen nothing, yet....
The impending river levels will far exceed those we witnessed last summer. 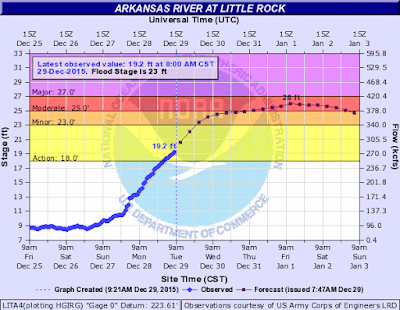 The most recent flood crest of the river was at 22.89 ft on 06/03/2015. The current forecast call for  a crest 26'. Last summer's event was considered an "action" level, below even "minor" flooding, while 26' is considered a "moderate" event, approaching major flooding.

Arkansas River levels this week and those in June will easily make the National Weather Service top-10 Historic Crests list: 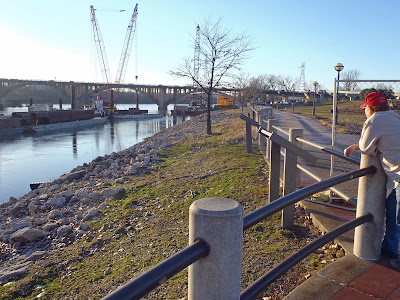 I'm sure that the folks building the Broadway Bridge have seen more than enough high water as they try to pour footings, set piers, and assemble some structure on barges along the river.

After a long, cool spring stretched into a summer marred by crazy rain and trail flooding, fall and early winter have been perfect for riding, with October-like temperatures stretching into December and October seeing August-like heat, including a record high of 98 on October 15. 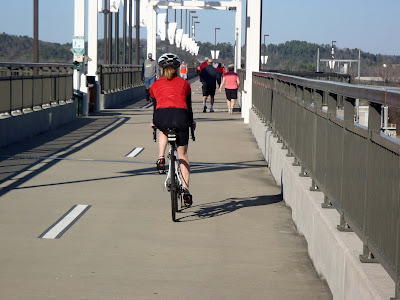 'tis the season. Christmas Eve was marked by temperatures in the 70's. Short pants were prevalent on the BDB.

The weather seems to have finally caught up with the calendar, though a few days too late for many outdoor retailers for whom cold weather means brisk sales of fleece, down and flannel (our friends at Ozark Outdoor Supply are having a big sale on winter goods, by the way. Go by and spend your Christmas money.).

I'm certain that when the floodwaters recede, the call will once again go out for volunteers to help clean up the River Trail. This time, you can help by either getting out your shovel and rake or by reaching for your checkbook or credit card.

The shoveling is damn hard work, and, while a cold snap might discourage the swarms of gnats that plagued us last summer along the trail, the credit card route is guaranteed to create fewer lower back ailments and no bug bites at all.

Rob Stephens and the Arkansas River Trail Task Force had already embarked on a campaign to help NLR Parks acquire a trail sweeping machine. You can follow the link below to learn more and to make your tax-deductible donation:

The first fund-raising goal is to provide funds for North Little Rock Parks and Recreation to purchase a trail sweeper, similar to the photo shown here. This will enable quicker trail cleanup after flooding. The approximate cost is $18,000. 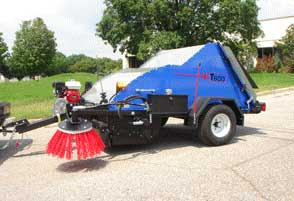 As any of us who helped tackle the clean-up last summer will attest, the sediment that get deposited by river flooding starts out as a sticky, gumbo-like mud, which then dries into densely packed fine sand. The usual practice is to use a blade to push most of the sediment off of the trail, followed by sweepers and then blowers. That creates berms piled on either side of the trail which affect drainage and often result in the material washing right back onto the trail. The new sweeper will allow the sand to be moved off of the trail.