Along The Trail- The Hoga, Bike Boy, Broadway Bridge and Grants

The past couple of weekends have produced some absolute perfection for cycling in central Arkansas. Mild temperatures, clear skies, and light winds made for the kind of days that we yearn for in December, so where was everybody??  I'm sure that the allure of the shopping centers and malls kept some people under a  roof, but I don't think I know any of those folks.

I decided on a recent Saturday to take a bit of a tour around town. As always, I found some interesting developments along the away. 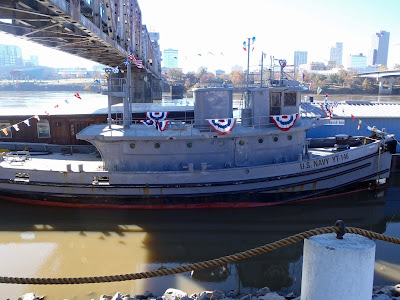 The heroic Hoga has a new home.

After 10 years of haggling, maneuvering, transporting, starting and stopping, the WWII era  harbor tug came into port at the North Little Rock Maritime Museum last week, in plenty of time for Pearl Harbor Day ceremonies. The project to bring the Hoga here was a mission of former Mayor Pat Hays and, though I had doubts about the value of the project, I will admit that the account of action aboard The Hoga during the Japanese attack on Pearl Harbor makes me believe that the old girl deserves to rest in a place of honor. While the Arkansas River may seem like an unlikely spot, it is far better than a scuttling or the scrap yard.

Where has the Bike Boy gone?
I have a fondness for the Bike Boy statute sited near the north foot of the Clinton Park Bridge. I noticed the the boy was not present on recent rides so I made in inquiry of alderman Debi Ross. Debi made a quick inquiry and discovered that the work had been moved to accommodate some recent work by the North Little Rock Street Department. It is safely in storage and will be restored to its rightful place. 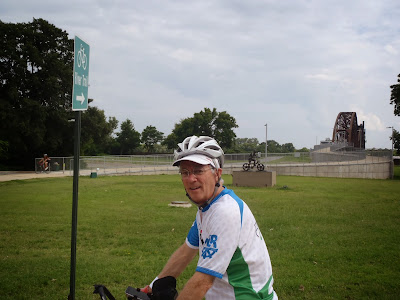 What heck is falsework?

I've stumbled all over reporting about the jungle of yellow painted steel that is being staged on the riverbank adjacent to the Clinton Park Bridge. I won't review my various incorrect assumptions and blathering thereof, but will proceed to report what I currently believe to be correct. 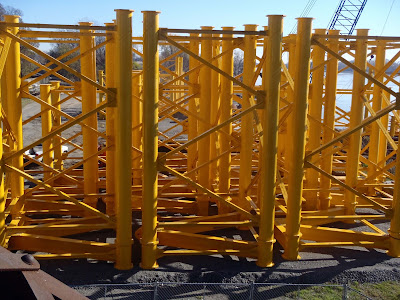 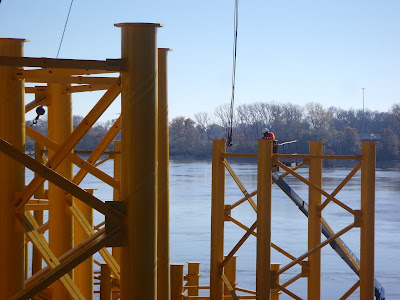 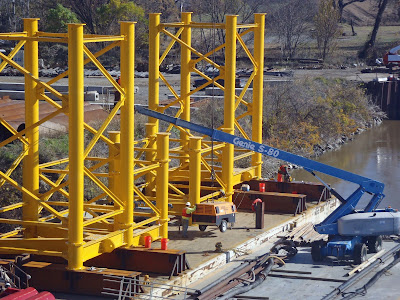 
An engineering feat is set to unfold.


I had an opportunity to speak to John Ruddell of Garver Engineers, and their project manager for the Broadway Bridge. I asked John how the falsework was going to be deployed. In a discussion several months ago with Cooper Khyl of Massman Construction, I had been told that much of the construction would take place on barges lined up between the Main Street and Broadway Bridges. John was able to add some detail. 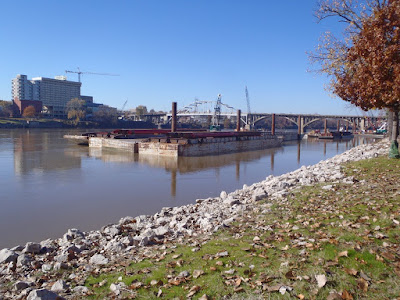 We haven't seen anything, yet!

Most folks have seen the many barges lined up along the river at present. That array will be expanded. The falsework will be assembled on the barges and the structure will be built over it. John had been told that the maximum height of the bridge's baskethandle arches and towers arches would rise 170-feet above the river. I found that to be incredibly exciting as I compared it to the heights of downtown buildings,. When the spans have been assembled, tugs will move the barges into position so that the structures are in place over their respective piers. The barges will then be flooded to lower them into place. This is going to be an amazing process, and I hope to be on hand when the moves takes place.

Grants
The Arkansas Highway and Transportation Department has historically turned back federal dollars that are designated for alternative transportation.
This appears to be changing. This from the AHTD:

Office of the Director

The TAP is a Federal-aid program established in 2013 that allows eligible sponsors to apply for funding to construct sidewalks and trails for pedestrians, bicyclists and other non-motorized forms of transportation, create systems that will provide safe routes for non-drivers (children, older adults and individuals with disabilities) or other similar activities.  This year, the Arkansas State Highway and Transportation Department (AHTD) received 93 applications requesting more than $21 million. Seventy-one projects were selected to receive approximately $16 million in available funding.

The SRTS Program was established in 2005 and is used to enable and encourage children to safely walk and bicycle to school. These projects can include construction of infrastructure to improve the safety for pedestrians in the vicinity of schools or non-construction activities such as public awareness campaigns, traffic education, outreach programs and student bicycle safety training.  This year, the AHTD received 39 applications requesting more than $6 million. Eight projects were selected to receive approximately $1.2 million in available funding.

The RTP is a very competitive Federal-aid program established in 1993 allowing cities, counties, state or federal government agencies, and non-profit groups to apply for funding for the construction or maintenance of recreational trails or trail facilities throughout the state.  This year, the AHTD received 48 applications requesting almost $9 million.  Twenty-eight projects were selected to receive approximately $3.2 million in available funding.

The AHTD will work with the successful applicants to develop their projects and see them through to completion.  See attached lists detailing the projects selected for funding.

The City of Little Rock received grants to fund 3 projects, Riverdale, MacPark, and the Safe Routes to School - Dunbar. Pulaski County was awarded a grant for improvements on Pinnacle valley Road, though how that will be deployed is as of yet unclear.
Bauxite received $500,000 to begin preservation of  the Old River Bridge s part of the Saline Crossing Park and Recreation Area. The bridge will be a key river crossing for the developing Southwest Trail project.

In spite of noise-making by some conservative congressmen, the recent national transportation bill is set to increase funding for trails. Those same congressmen will line up for the ribbon cuttings as projects come to life, but that is politics.
Posted by JBar at 12:08 PM