Each year, I embark on a quest to embrace my inner mountain biker, with some years bearing more fruit than others. This year, I started out with a declared plan to enjoy my mountain bike more frequently, and that plan has only been encouraged by trail flooding and few days of cold, windy weather. The result is that I have been riding at Camp Robinson pretty frequently.
Riding at Camp always turns me into a cheerleader for both the trail system that exists there and for the many volunteers that have created, maintained, and improved the many miles of well-groomed single-track. A few years ago, a timber harvest in Camp's TA2 almost shut down riding for an extended period of time, and optimism for a revival was at a low.

Here is a comment from a December 2010 post regarding Camp Robinson that puts that state of things at that time in perspective:

... there are a few (literally) riders who maintain or even use the trails at camp. If these riders quit, the trails will disappear and eventually there will be no need to maintain a sign-in log at the visitor center. Who knows what the future holds for cycling on camp? 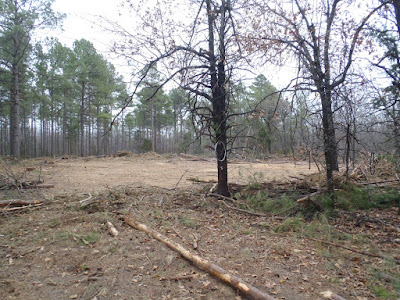 The original "Christmas Tree" was only a stump when this photo was taken. It had been decorated over the years with old wheels, broken chains, and discarded tubes. It wasn't really art, but served as a meeting place and landmark at the junction of Yucca, Christmas Tree, and the center road.


Those were dark times for mountain biking at Camp. I was at the height of my enthusiasm for the place, and was determined to deal with the logging and the ensuing burn-offs and mud. For those of you who have never had to traverse a fresh clear-cut, consider that marketable timber is hauled out, leaving behind a maze of shattered wood and twisted branches. In addition, the dozers, trucks and skidders churn the soil so that wet conditions can add bottomless mud to the mix. After that, as at Camp Robinson in 2010-2011, you can then burn it all off to leave a smoldering expanse of wrecked unrecognizable terrain. I remember one cold night after losing the trace of whatever trail I was trying to follow, likely 10-Bridges, I decided to try to beat darkness by taking a more-or-less straight line back to my truck. My mistake resulted in an adventure of knee-deep mud, thrashing maddened maneuvering of bike over downed timber, and a decision that it simply was not f---ing worth it. There were still a lot of quality trail miles to ride even at this point, but access and atmosphere sucked. 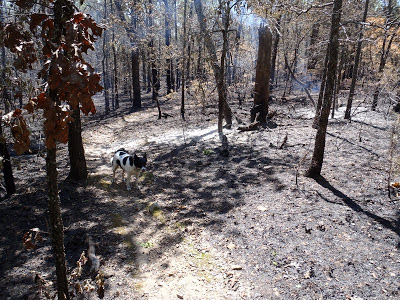 April 2011. Riding at Camp Robinson was at a low point. Even Willie was looking disgusted, his feet and belly blackened by the char.


We're back, and better than ever.
I did go back to Camp Robinson, as did others. It took a couple of years for the earth to heal and for stubborn trail fairies to make repairs and rebuild or reroute trails. 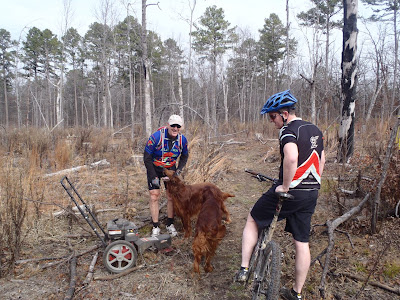 Basil Hicks and Bryan Shipman, along with others, were at the heart of the trail building and restoration at Camp Robinson. JBarCycling Jan 2012


Basil Hicks, shown above, has since retired and seems to have taken on the CARP trails as a new career. Folks like Bryan Shipman have been very helpful in communicating with the facility administration as some leadership changes have taken place at the Guard. I can't address that facet of things in detail, but it seems that Camp Robinson has been very welcoming of the opportunity for interaction with the local community afforded by the mountain bike trails. I have also met a number of folks taking advantage of the trails who are at the facility for training. While TA2 is still a training area first, the improvements to parking and other trailhead features certainly benefit the mountain biking crowd.
Three good reasons that the trails are in such great shape:
On a recent rainy Sunday, I decided to take the dogs out for a hike at Camp. As I headed in, I encountered a 3-piece band whose music accompanied much of our 5-6 mile walk. 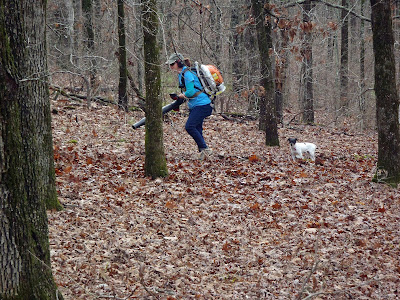 Sharon Saunders on backpack blower accompanied by her terrier. 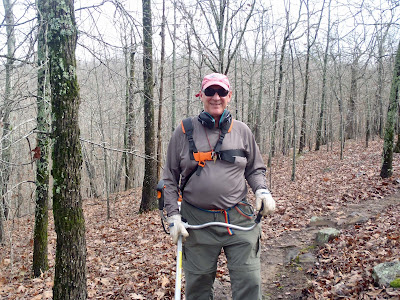 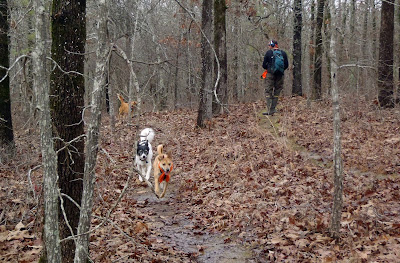 and Bruce Alt on chainsaw. 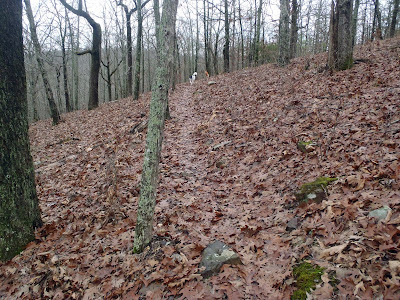 It can sometimes be a challenge to identify the trails at Camp when the leaf cover is thick, so the leaf-blowing  is really appreciated.

These folks are often seen hard at work so that we can have some of the best riding around, but they are far from being alone in their efforts. Last Sunday, as were emerged from a cold ride, we ran into Eric Grimmett. "E" was grabbing his helmet and shoes to "go ride my new trail". I had seen Eric, girlfriend Kashari, and his dad logged in ahead of me a few times, but had not run into them out riding. He let me know that they had spent the last couple of months building "the sweetest trail out here". "I'm building it like I build a bike." Eric has a longstanding reputation and as proud and capable bike mechanic, so that means that his yet unnamed trail will indeed be sweet. I haven't seen it, but will likely explore it soon. He might tell you where it is, but I'll let E do the unveiling.
Update: He unveiled in a Facebook post 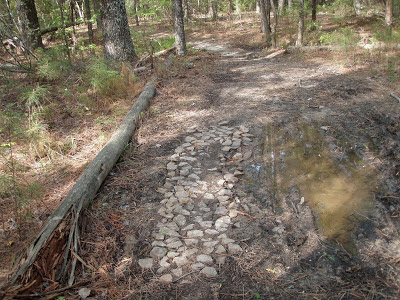 April, 2010. These rocks were hauled into this spot on 10-Bridges by wheelbarrow.

I also ran into Lane Septon recently. I first met Lane several years ago as he hauled wheelbarrows of rocks into 10 Bridges Trail, and he was back at work this week clearing leaves from under some of the many bridges to allow the water to flow. 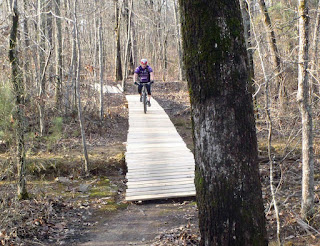 Even longer than it looks- I walked off the length of this new bridge on 10-Bridges Trail. It is about 85 feet long.

In the past, my winter excursions usually saw me leaving Camp Robinson wet, muddy, and cold, with the bike a total mess. There was almost always good riding but many of the key entry trails had some seriously muddy patches and unimproved water crossings. Good policy says not to ride muddy trails, but back then getting muddy was pretty much a fact of life on the CARP trails. Today, even after a big rain event, you would have to seek out off-path soft spots to experience the hub deep crossings of the past. Trails have been rerouted to better use the terrain, bridges have been built or improved, and most of even the smallest water crossings have been hardened.

The extensive trail system means that even on the heaviest user days, you are unlikely to see many other riders. I checked in on a recent weekend and there were likely 25-30 riders signed in ahead of me. I rode for a couple of hours on some of the most popular trail sections without encountering another rider until I was headed back to the parking lot. If you want company, you'll need to use your charm at the trailhead, as you are unlikely to cross paths with others once you get out on the trail.

A few short years ago, it appeared that mountain biking at Camp Robinson was not quite dead, but seriously ill. Now, the scene is alive, well, and gaining strength.
Get your sportsman pass, air up your knobbies and head to Camp. If you have never ridden there, or if it has just been a while, you'll be amazed by what you find.
Posted by JBar at 9:30 AM

John, thanks for the putting this out there. Yes many of Camp's trails were destroyed and if not for some determined hard work of a few people they might have been lost forever. Many thanks to those people. Many of us are mountain bikers and road bikers. We are so very fortunate to have such a great mountain bike trail system and the Arkansas River trail here locally. It takes a lot of work and effort to keep the leaves blown off the trails and to keep the weeds cut back out of the trails. Once again many thanks to those who work many hours to keep the trails at Camp in such great shape.

Thanks for taking the time to discuss this, I feel strongly about it and love learning more on this topic. If possible, as you gain expertise, would you mind updating your blog with extra information? It is extremely helpful for me. Best Mountain Bikes Under $500

It's really a wow experience!! It is extremely helpful for me.
Best mountain bikes under 1000