Outgoing Pulaski County Judge Buddy Villines was feted on Tuesday at the Marriott Hotel in Little Rock in an event appropriately called, "There Goes The Judge". A benefit for Bike Advocacy of Central Arkansas, over 500 tickets were sold. 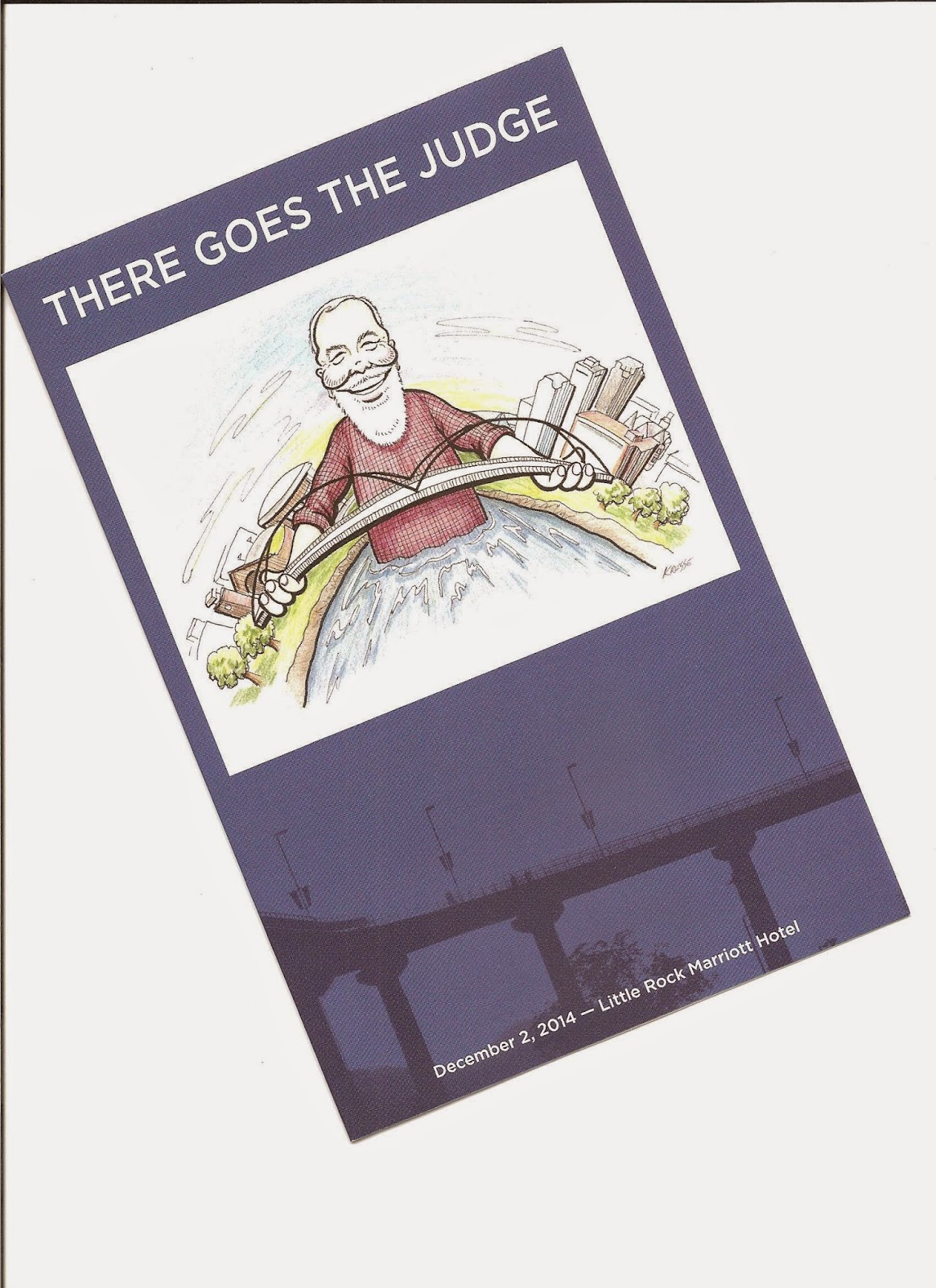 Until I started riding and subsequently got involved in the politics of cycling advocacy, I had not really been very familiar with Judge Villines. I had voted for him because he was the incumbent and things seemed to rock along pretty smoothly in county government and from what I read and heard , he seemed to be a reasonable guy. When what was to become the Big Dam Bridge became a topic of conversation, I started paying a little more attention. Like many others, I had my doubts that such a project could ever be funded and built, but the tenacity of Villines, along with North Little Rock Mayor Pat Hays and others, kept the vision intact. In the fall of 2006, I was among the first members of the public to ride across this now-iconic structure, having watched the construction progress on my regular rides on the River Trail.
I got a hint of the visionary side of Buddy at the grand opening of Spokes bike shop in January of 2009. The judge spoke of the importance of the River Trail to our community today and, more importantly, to the future generations of our community.

I said it as well then as I could say it today, so, from that article:
He noted that Iroquois Indians had a philosophy of basing decisions on how they affect the next seven generations. That kind of vision is rare in today's world in which politicians are concerned only with the next election cycle and corporations rarely look beyond the next quarterly report.

In our world of politicians who want a quick return, who, among other things,  dispute accepted science with industry-sponsored dogma, and who would readily sacrifice the quality of our air and water in favor of short-term cheap energy, a dose of Buddy Villines was refreshing.

Two Rivers Park Bridge was a plan going nowhere as the nation was slammed into a recession. Funding for such a project seemed unlikely, but when stimulus money became available for infrastructure, Pulaski County had a shovel-ready project waiting to be built. The idea was progressive and the timing turned out to be impeccable. The result makes the plan for the bridge look absolutely visionary. Two Rivers Park has gone from being a lightly used 1000 acre dead end to becoming a wildly popular destination, in addition to being a vital link within the Arkansas River Trail System. 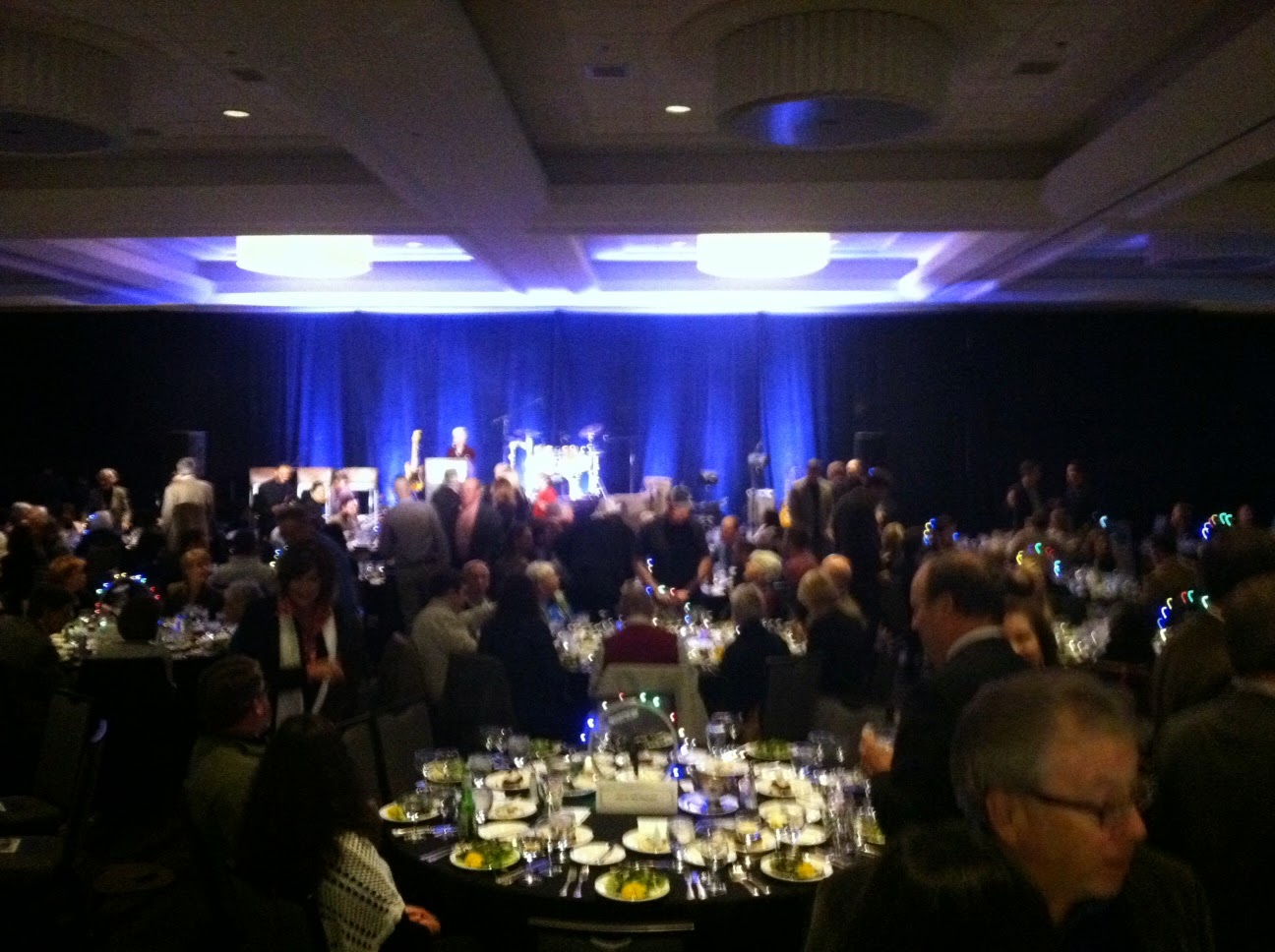 I jokingly told a neighbor that I was on my way to meet 500 of my closest friends. That was pretty close to what happened, though I'll admit that I only knew 3 or 4-hundred of them.
You can read more of Villines' bio below, but as a lifelong North Little Rock resident, I can honestly say that central Arkansas has become a more attractive place to live than I ever imagined it could become. While a new shopping mall to be a pinnacle of achievement to some civic leaders, Buddy Villines has been a driver of the type of progress that has changed many lives for the better while making our community more attractive to business and industry. 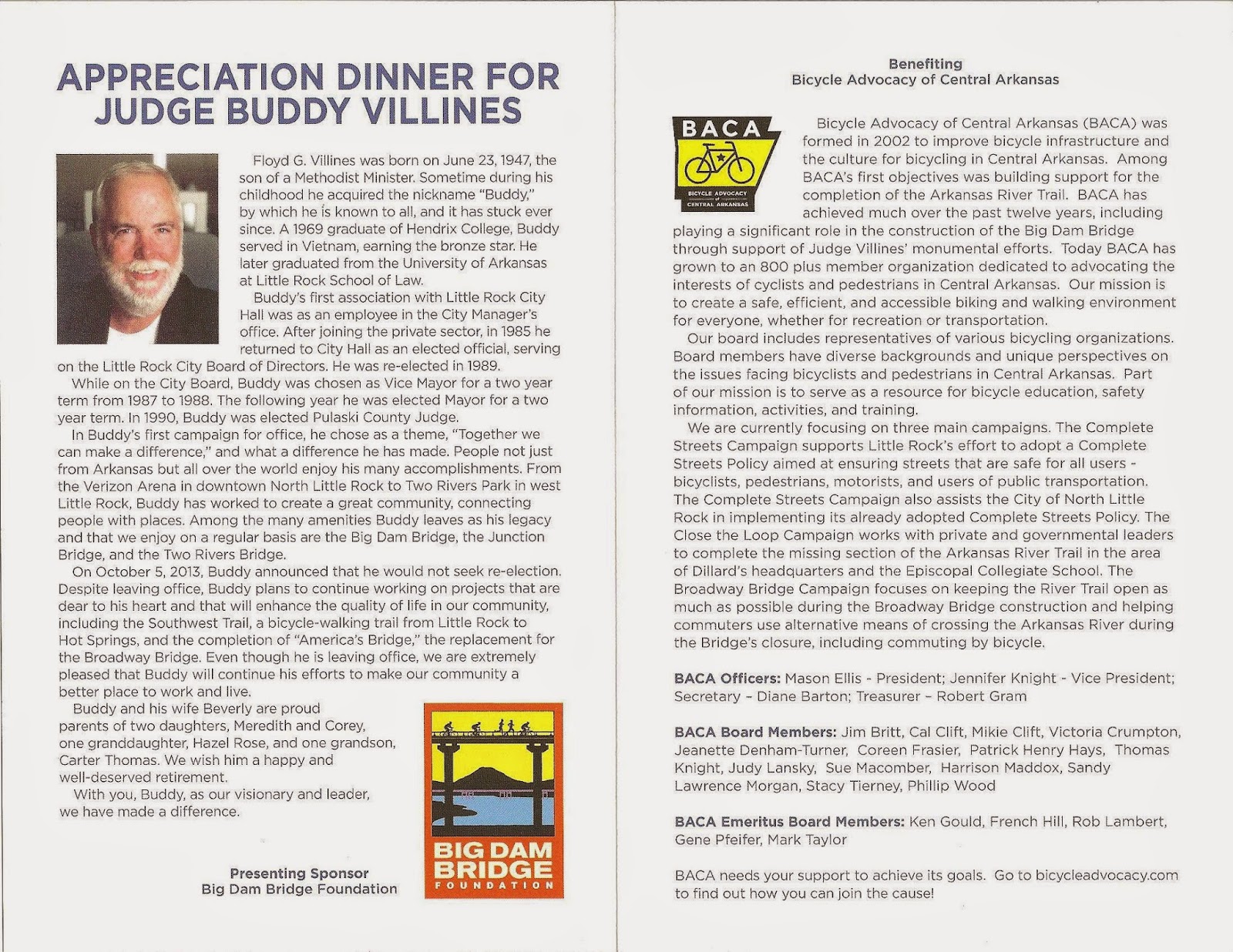 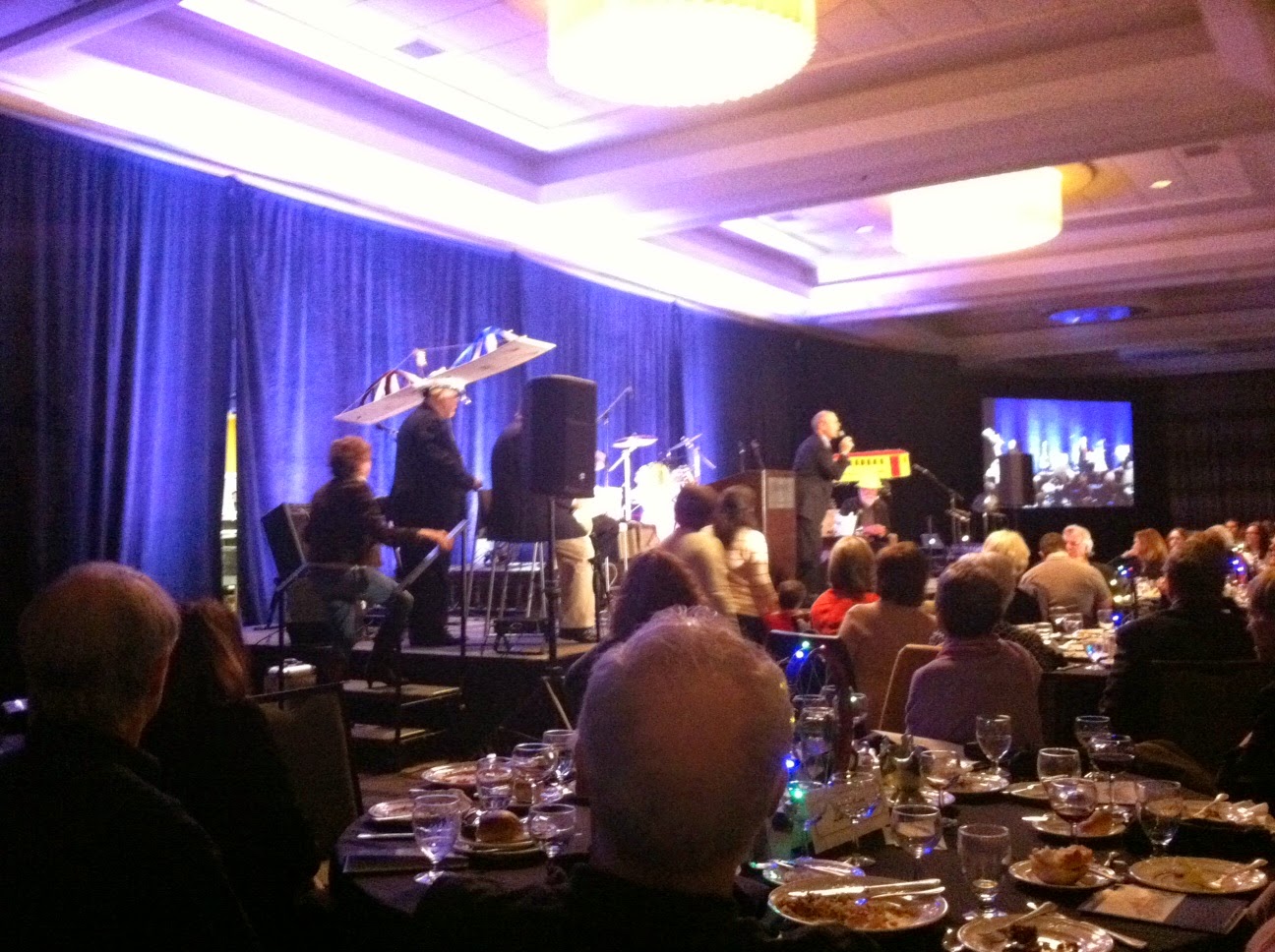 Craig O'Neal hosted a roasting as Villines modeled a trolly car hat, which could not rival the red, white, and blue double basket handle Broadway Bridge headgear of the next speaker.
I'm not usually entertained by tributes and roasts, but Villines' personal story is an interested outline of his generation's experience from 60's rock'n'roll and Vietnam to the present.  Add a couple of decades of the history of growth and change in Pulaski County in the company of friends and like-minded folks to complete a very nice evening.
Thanks go out to presenting sponser Big Dam Bridge Foundation and all the other folks who contributed and participated in this event.
And to Joudge Buddy Villines, thank you. You have made a difference that will last for those seven generations and more.
Posted by JBar at 9:03 PM

Yes, it was a great event and tribute to Judge Villines, BACA, and the hard work by Judy and Peggy and others on pulling if off. This was a good as some of the big charity dinners I used to attend in Los Angeles.