As many of you may already know, David Fike has closed the doors on Fike's Bikes at River Trail Station in North Little Rock. I think that David's bike rental business had suffered from competition from Bobby's Bike Hike in the LR River Market, along with inconsistent marketing, unpredictable hours, and a relative lack of visibility to the tourist trade. Fike made some improvements to the city-owned building, such as the patio and outdoor fire pit, and had obtained a beer permit. In addition to bike rentals, the business was rented as an event center for meetings and private parties. 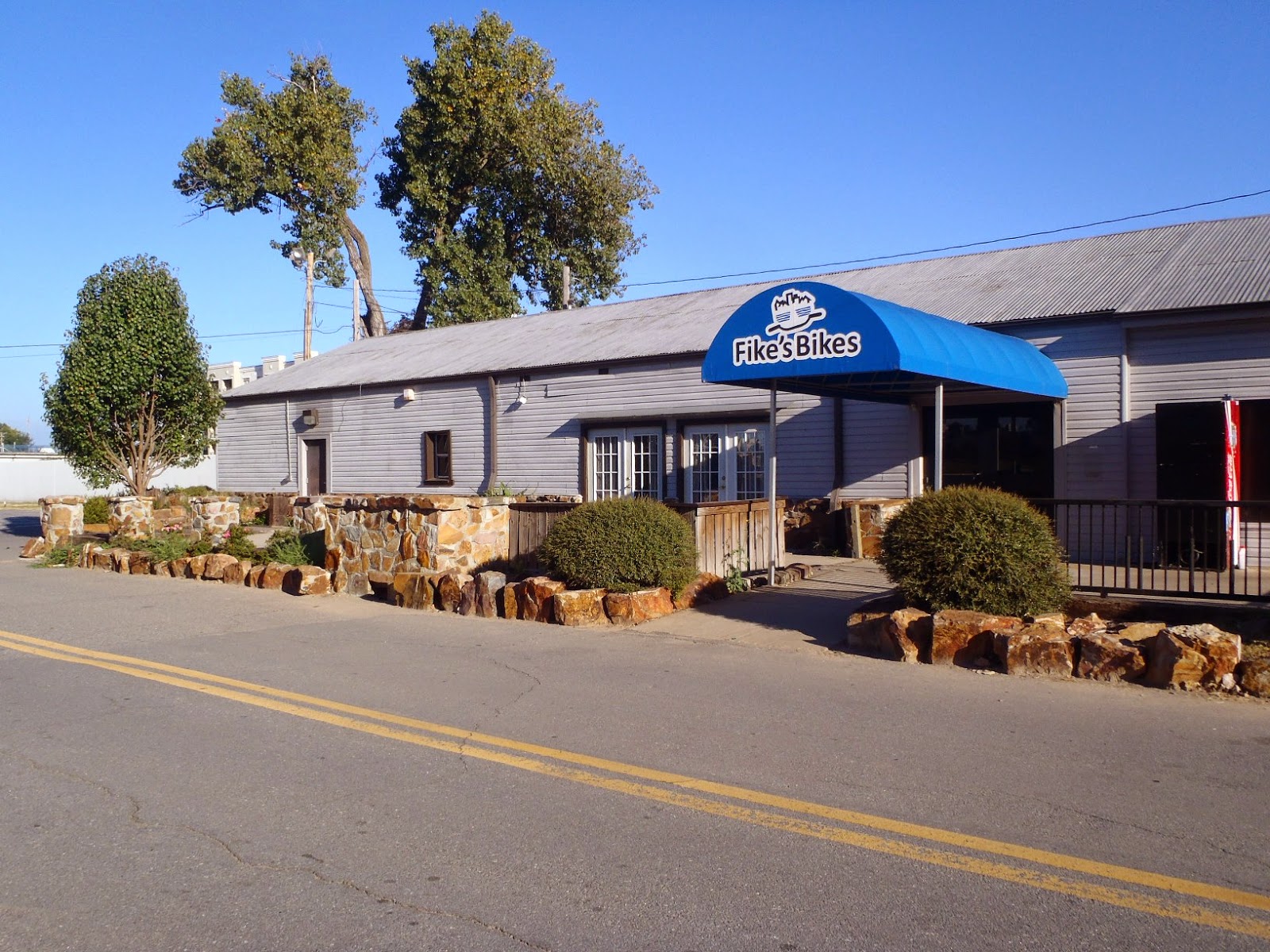 River Trail Station
The location served as a pit stop for trail users, a place to enjoy a post ride beer, a meeting place for groups, and David's presence added to the feeling of security for the many cyclists who chose to park there for their rides. That was good for the community but did little to pay the bills.
I'm sorry to see David give it up, but perhaps the location will see use as something new and a little more vibrant.

Do you have an idea and a business plan?
The City is currently entertaining proposals for use of the building.
For information, contact:

I would like to see a combination bike shop/craft beer venue that also serves coffee early and breakfast late on weekends. This could be your future!
Broadway Bridge construction will likely impede traffic to the area for a year or so, but don't let that stand in the way of a good idea.

A Sad Ending To A Decades Long Love Affair

The Arkansas Valley Model Railroad Club was founded in 1962 and, since 1974, has been located in the UP yellow building at 3300 River Road in NLR near the quarry gates of the Arkansas River Trail. The many trail users who passed by without ever having an opportunity to look inside would likely have been amazed at the small world that the building held. It was filled virtually wall-to-wall with an intricate model train set-up, complete with mountains, trees, a roundhouse, and too many small details to describe. 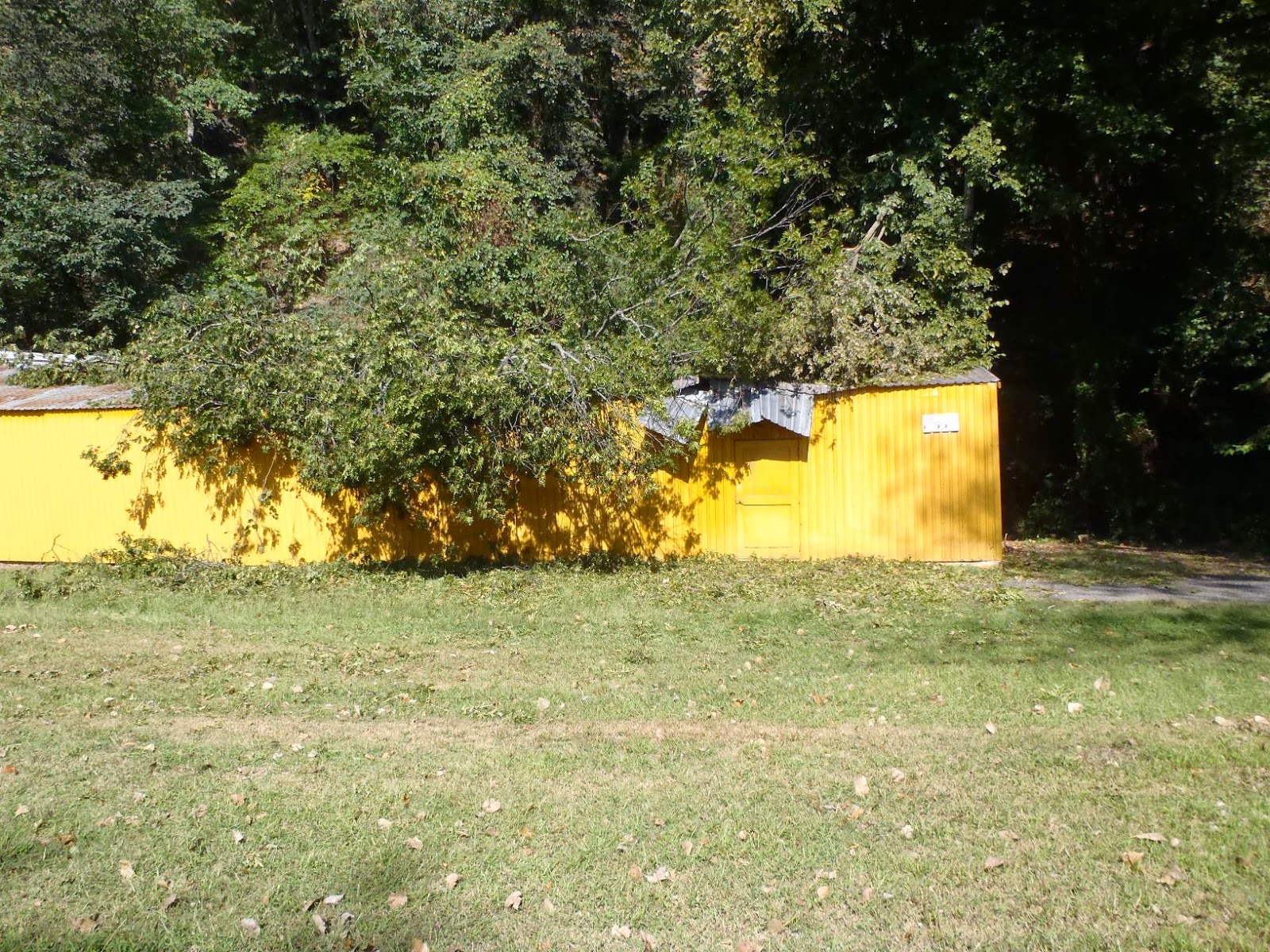 This tree fall dealt a fatal blow to the building housing a small world of trains.
The storms that blew through the area last Thursday toppled a large tree onto the building, causing irreparable structural damage. I noticed the damage on my Sunday ride and stopped by to get a report. Club members we sadly sorting through the debris and dismantling the set up in preparation for a move to a storage unit. 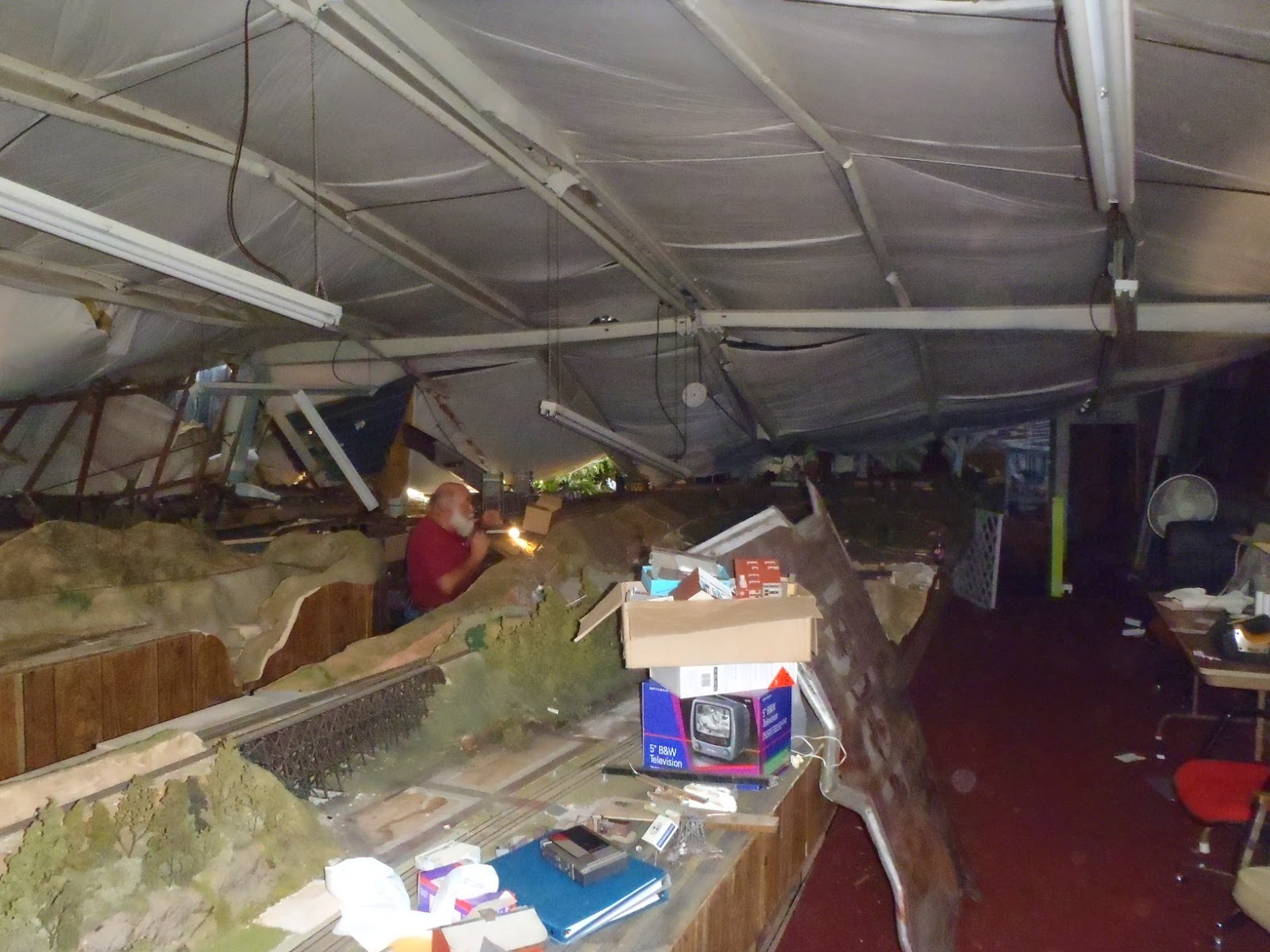 A club member preparing the model RR set for the move to storage and an uncertain future. 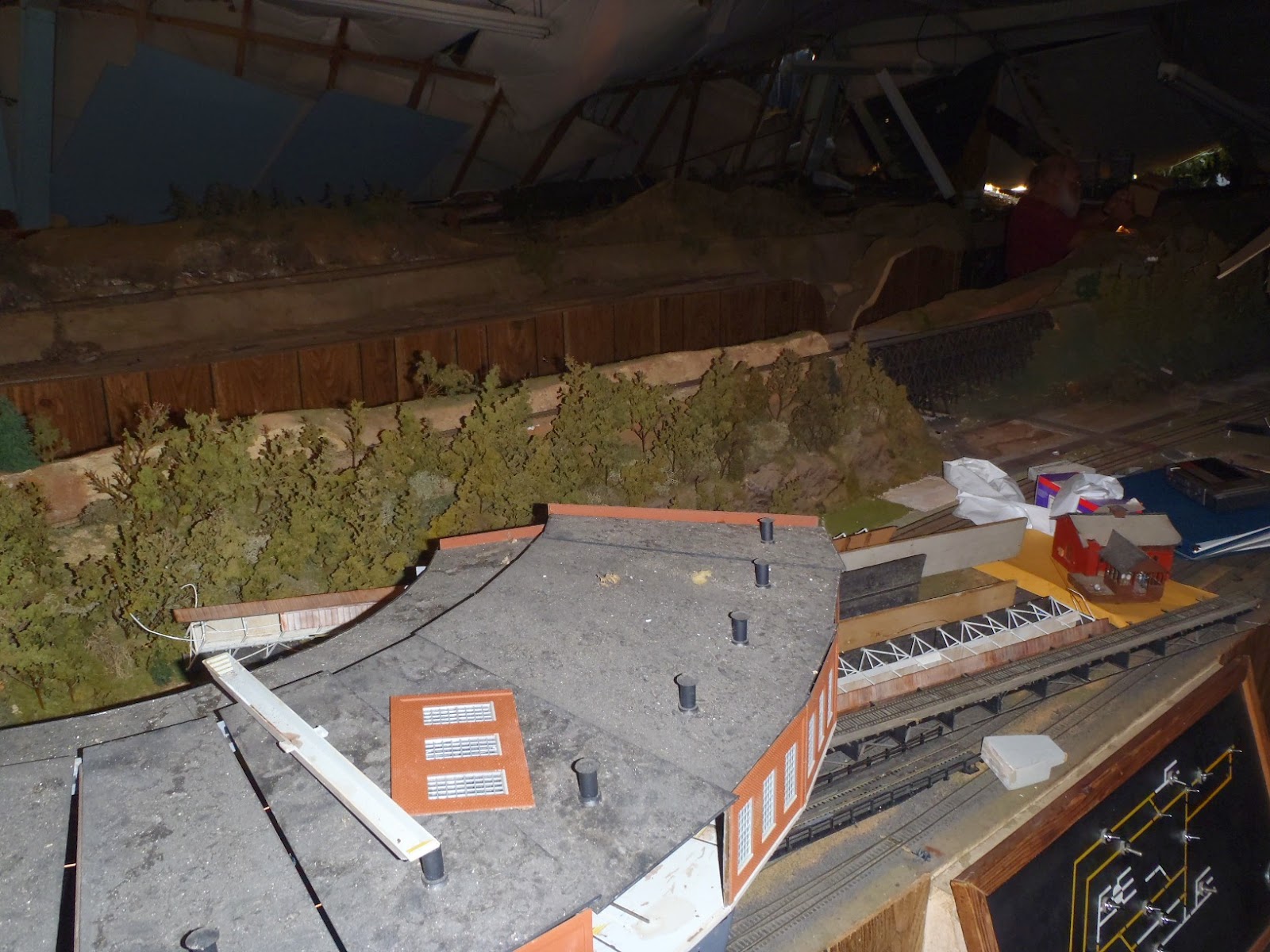 I suspect that it would be hard to calculate the hours of labor that went into this set over the years.
I spoke to a club member who reported that they had no place to move and that the club was down to 6 members, several of which are over 70 years of age. They just don't have the collective energy and resources to start over. With things like this, the joy is in the doing, but it is still sad to know that the project may be lost to a storage space.

On the Sunday morning following the BDB100, I headed out for a ride along the River Trail that took me by the NLR Wyndham Hotel. It took note of the fact that many of the vehicles in the parking lot had bikes or bike racks mounted. 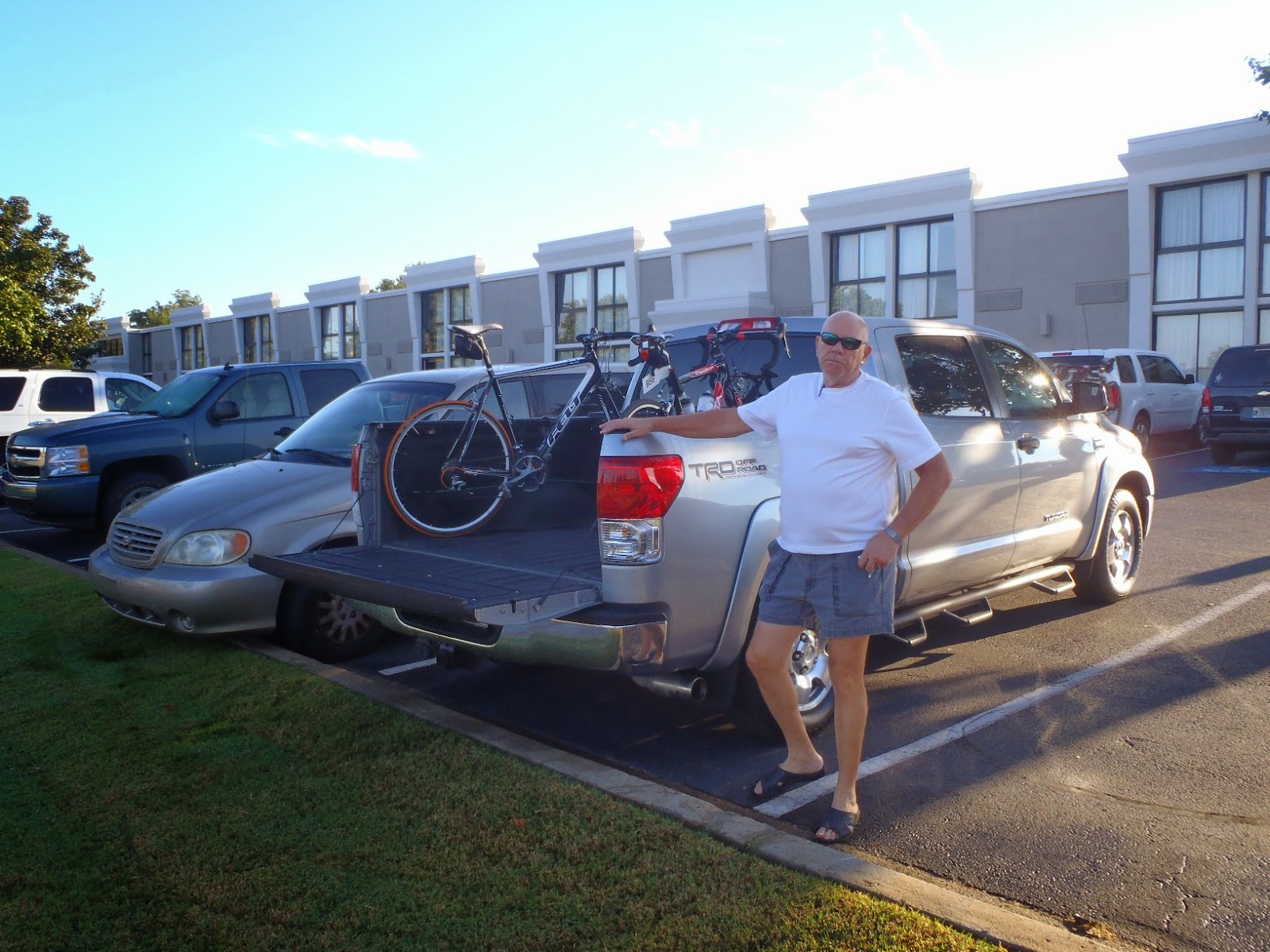 This gentleman travelled from around Lafayette, LA, with friends to ride the BDB100. He met his brother from Fayetteville for the ride. All stayed at the Wyndham. Judging by the cars I saw in the lot, most of the rooms were rented to riders.
I met a group staying at the Capital who were from NYC, along with a Bicycling Magazine exec who was here last year on assignment with Peter Flax, but paid his own way to come back this year. That is the kind of draw that our River Trail system has become. 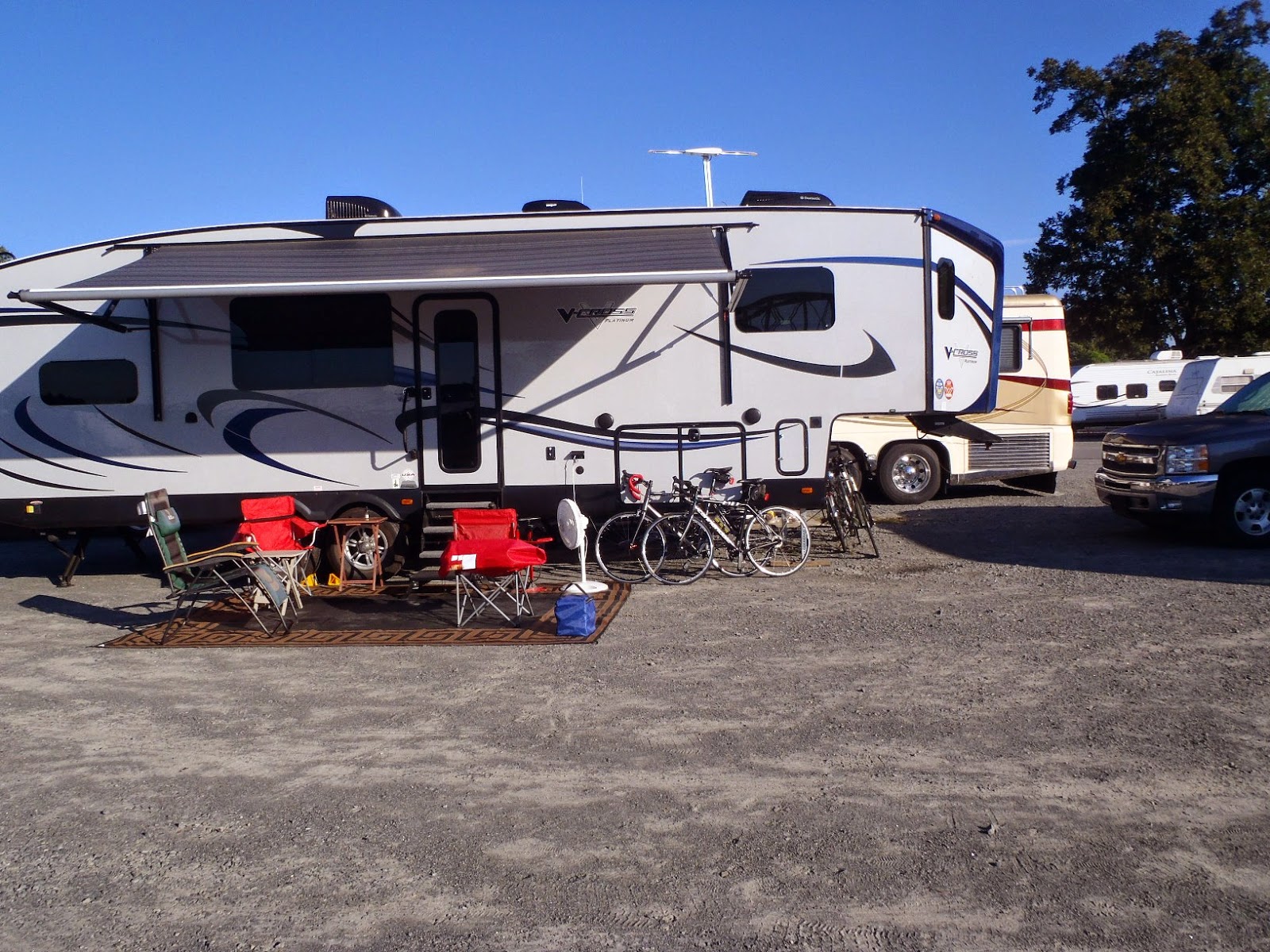 The RV park was also heavily populated by riders. 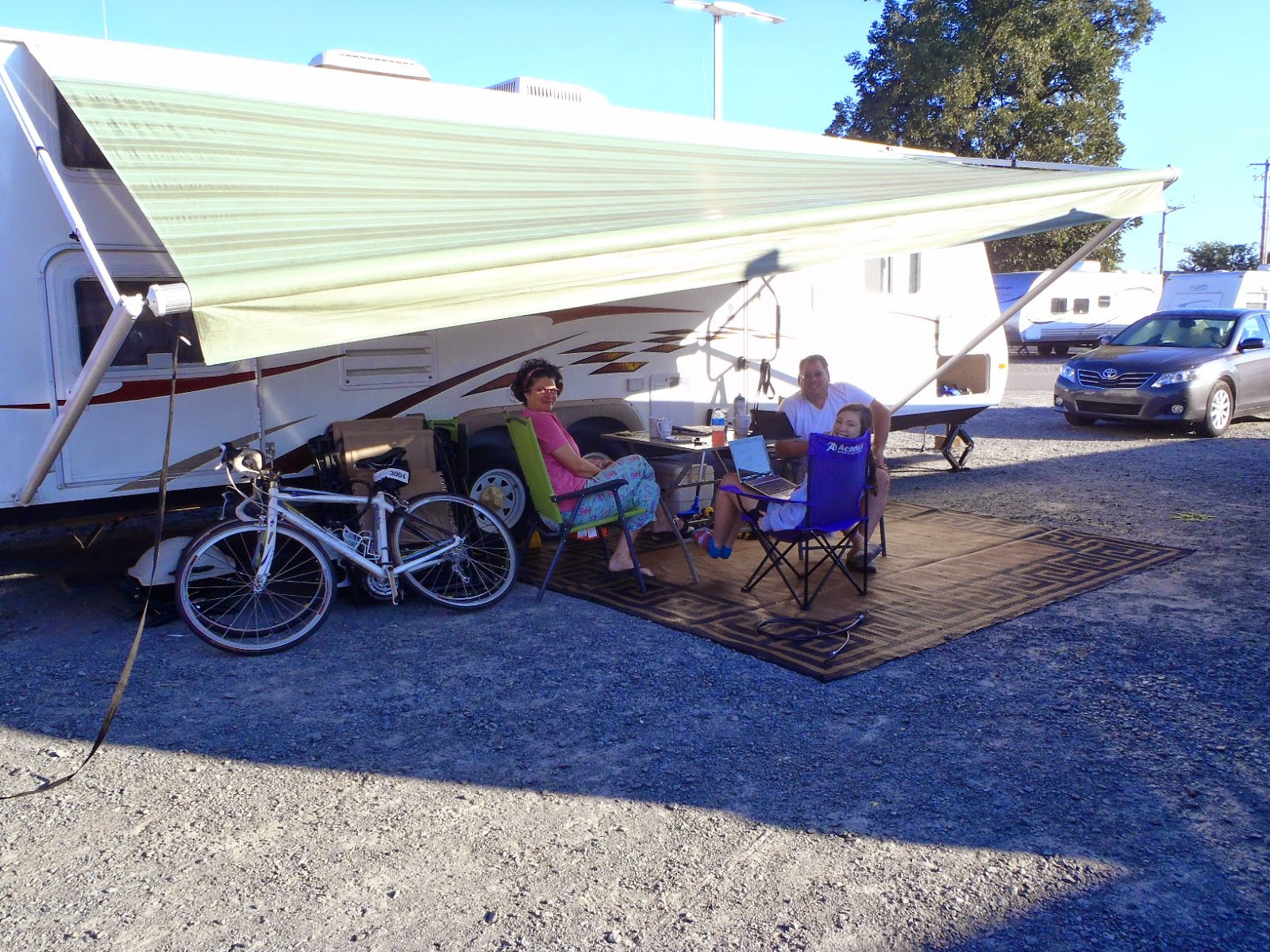 This family was up from Benton. Mom did her first 50-miler, along with her hubby, while the young lady rode 68 miles.
I always find it ironic when supposedly "pro-business" types talk about the investment in our bike trails as bridges as wasteful spending, while the hotels and restaurants fill up for big events such as the recent Southwest Tandem Rally, and the cities and corporations have the BDB and Arkansas River Trail front and center in virtually every tourist and employee recruitment advertisement or website. For many people, Little Rock and Arkansas have been redefined by virtue of Forbes magazine "Most Livable Cities" ranking and high marks by Bicycling and other national publications. Quality of life is what builds vibrant cities with strong economies, educated work forces, and growing tax bases. It would have been cheaper on the front end to have let Central Arkansas stay as it was, an aging, gray city along the river, with a population streaming to Conway, Cabot and Benton. I'd much rather ride my bike through Argenta, SoMa, and along the ART as I watch us grow.