Arkansas River Trail Task Force and LRBFCC meetings were held in recent weeks and were the scene of discussions of several topics of concern to the cycling community. Here are a few infrastucture developments that may eventually affect your ride.


I-30 corridor: Discussions and public meetings concerning renovation/expansion of the I-30 corridor through Little Rock are underway. This is the busiest stretch of higway in Arkansas and any redevolopment is bound to have consequences, good or bad, for bicycle and pedestrian traffic. Historically, they have been bad, as freeways are among the most daunting barriers to alternative transportation. From my own Park Hill neighborhood near the I-30/I-40 interchange, there are only a very few routes available to cross I-30 or I-40 and those limited routes are far from "bike friendly" during peak traffic hours. Construction may be a few years away but our experince with the Broadway Bridge project taught us that is is never too early to start protecting our interests.

Speaking of the Broadway Bridge...
Many of us remember being told that construction of the new bridge had to get underway in 2013 of the highway department risked the loss of 50+ million dollars in federal funding. My, how time flies! The project is now supposed to bid on September 17, with construction beginning in early 2015.
Construction will close downtown sections of the River Trail for up to 2 years and likely make "closing the loop" a moot point for that time period. That said, the bike advocacy community needs to maintain efforts to resolve this gaping hole in our bike infrastructure.

Detouring The "Temporary " Route on Cantrell Road
Riders who use the permanant "temporary" bike route of the River Trail along the sidewalk in front of the Episcopal Collegiate School will face further challanges later this year. 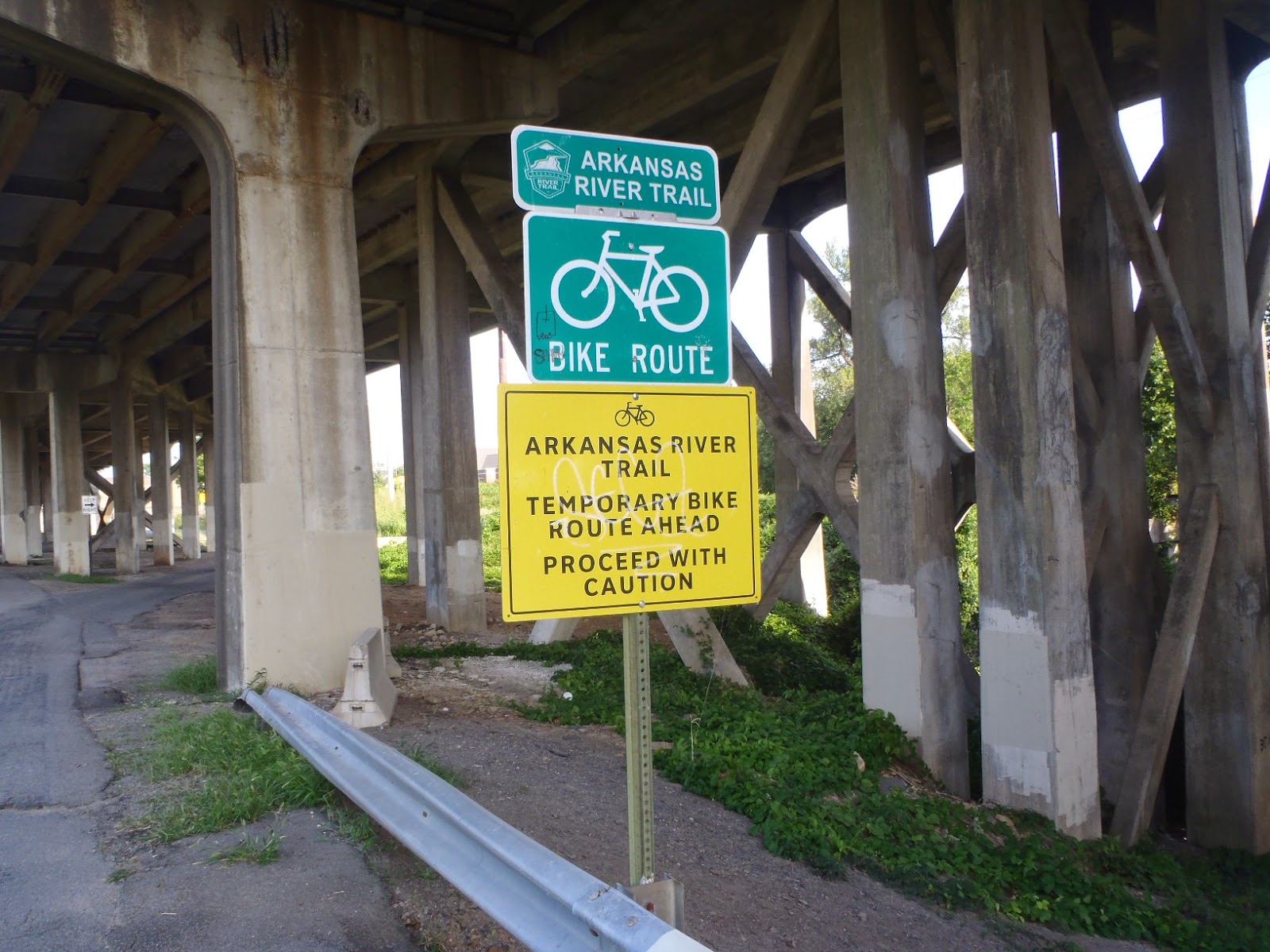 This will get worse before it gets better. 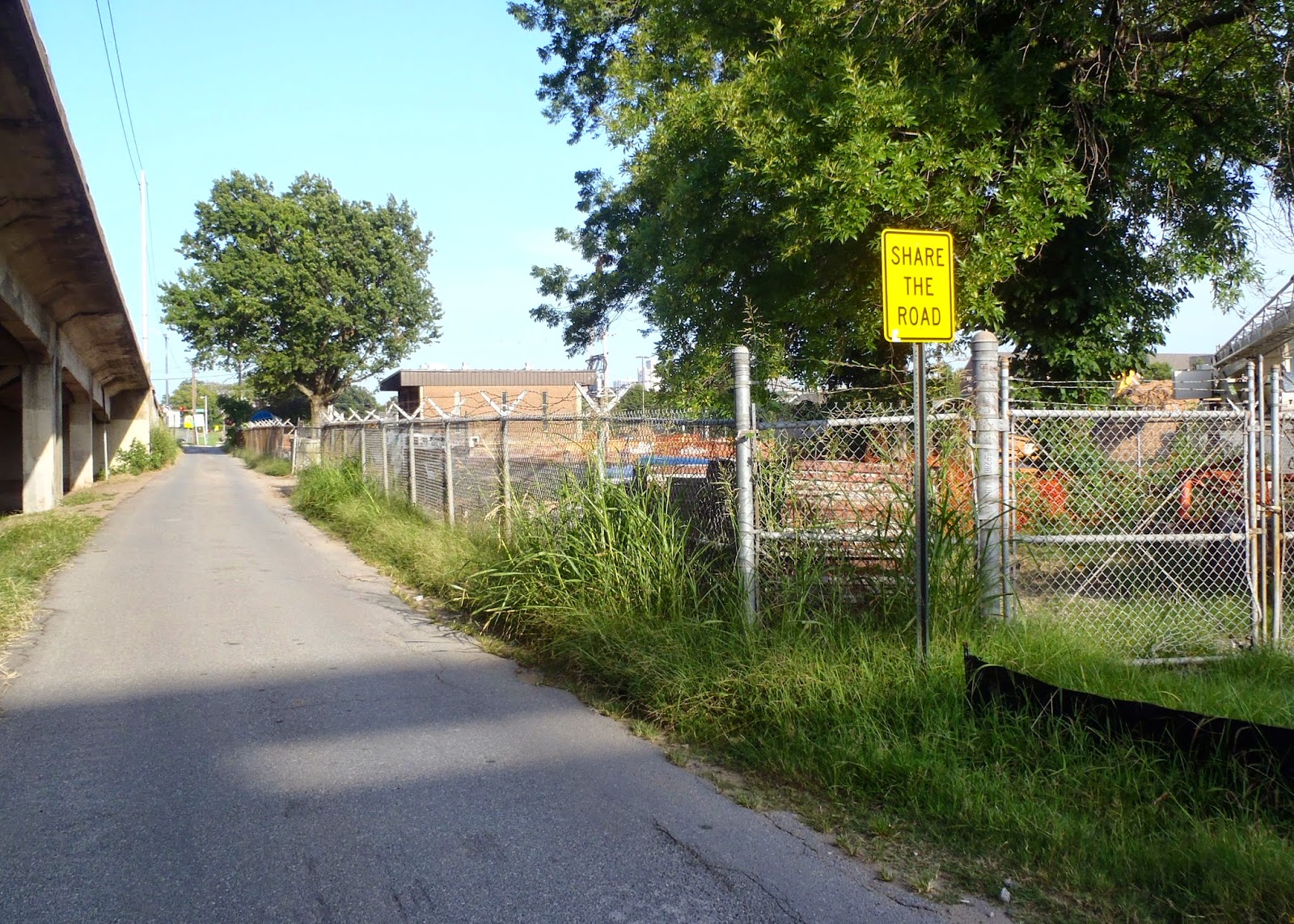 Before it's all over, sewer lines to this new pump station will have to be installed.

You may have noticed construction at the sewage pump station west of the school at the foot of the viaduct. The pump station is being rebuilt, and that project will include replacement of buried pipe along the road in front of the school. The excavation will close the trail detour for a period of time, so eastbound cyclists will be directed across to the sidewalk on the north side of Cantrell Road. Crossing will be at the traffic signal that serves the school. From there, cyclists are riding the sidewalk across multiple driveways before dealing with a few power poles. Casual riders will not enjoy this. 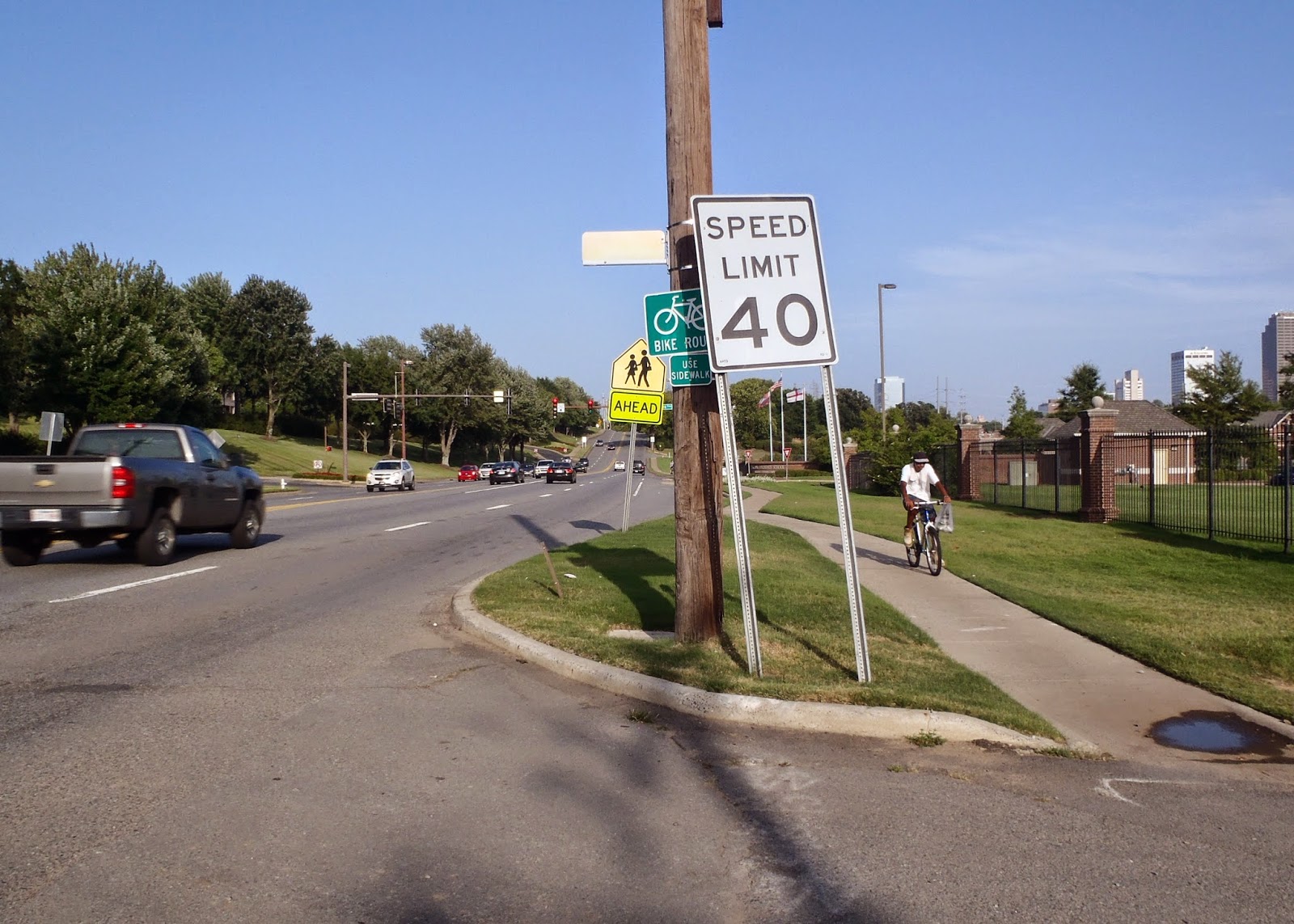 Development in this stretch is incredibly dense, with a busy state highway, a rail line, the Arkansas River, and the interests of the Stephens and Dillard families all packed into narrow corridor. 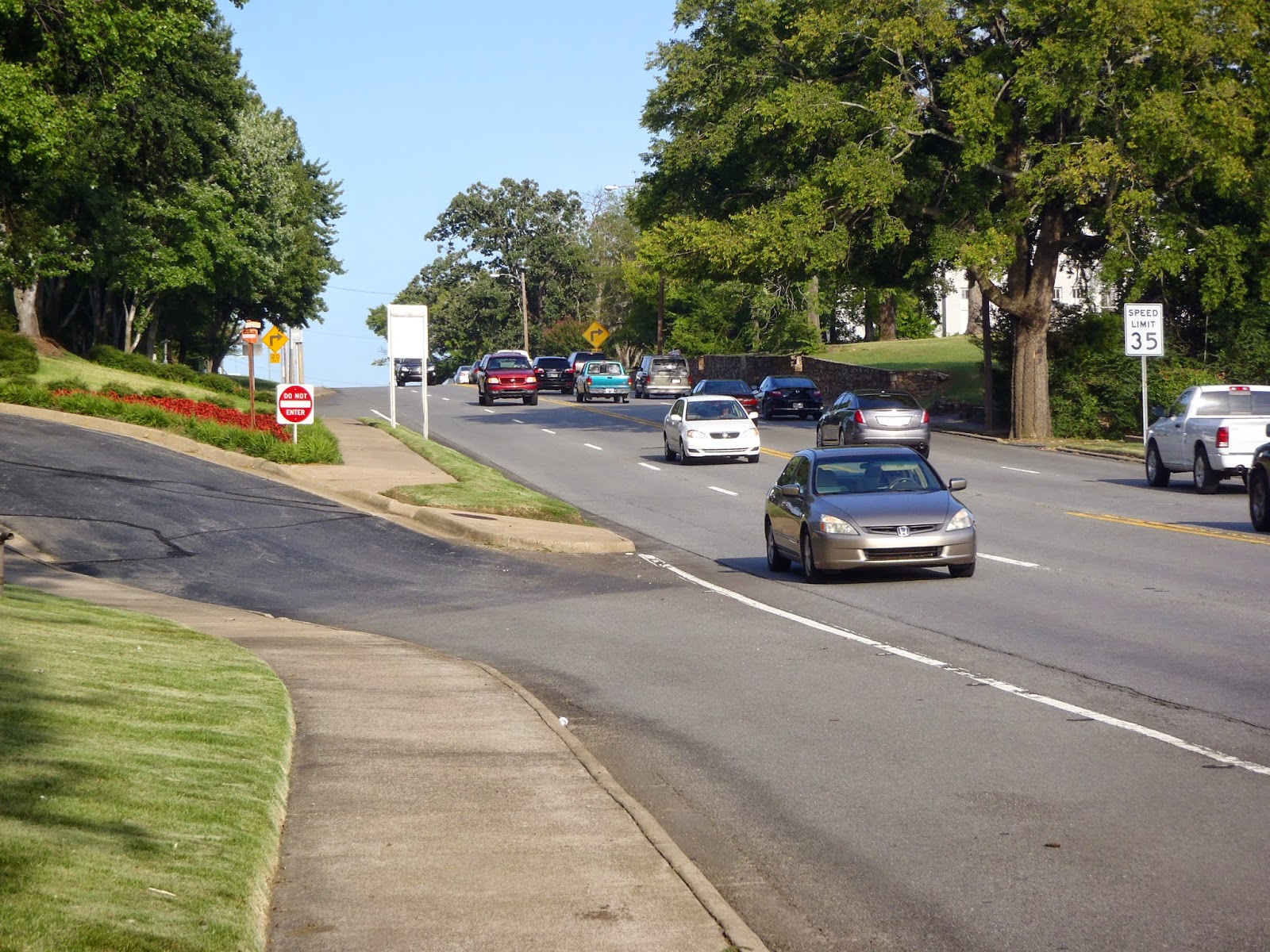 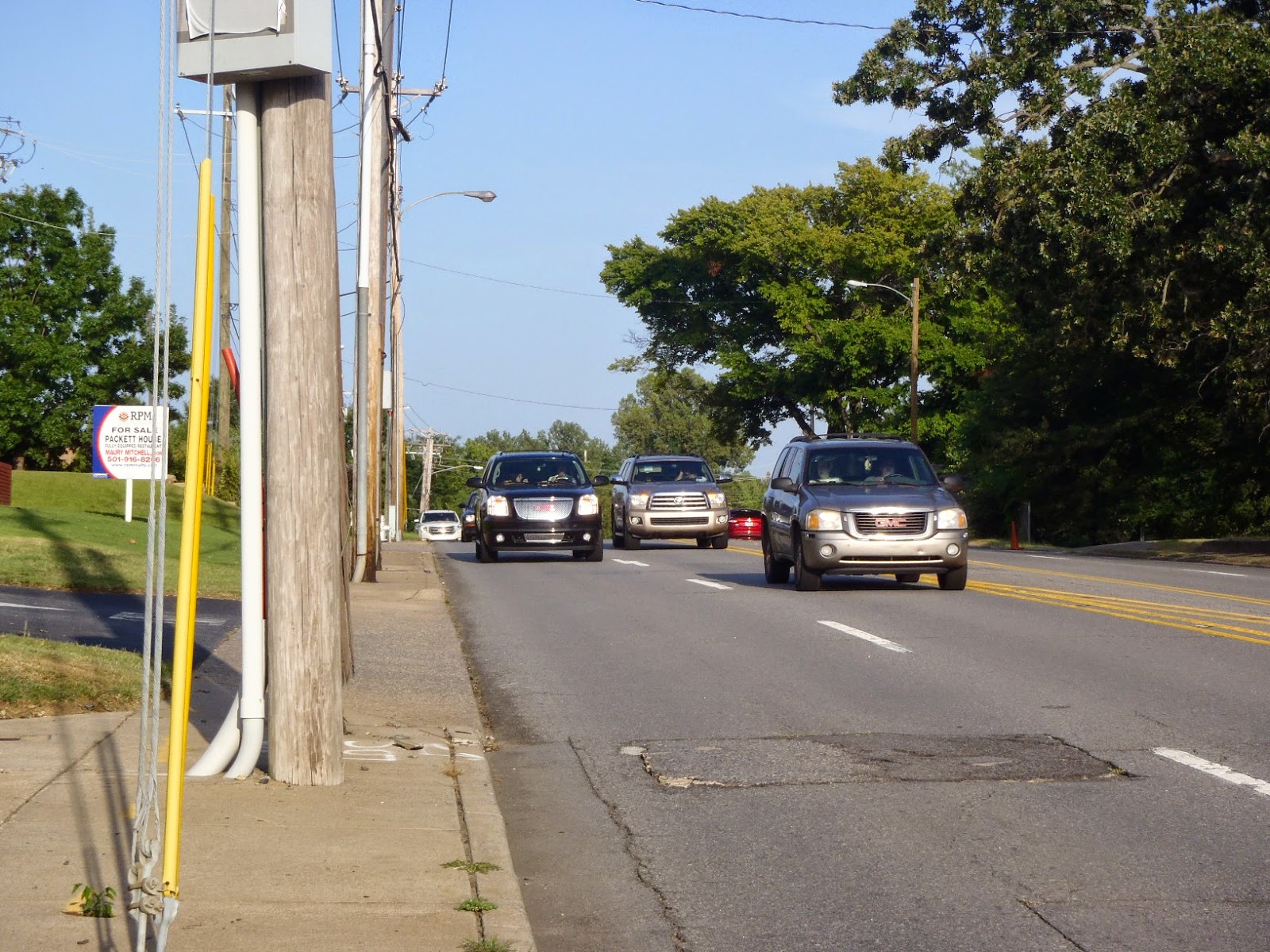 There is room to ride around the poles on the off street side....barely.

After dealing with the 6 driveways and multiple mid-sidewalk power poles, I'm not sure what the hell we're supposed to do. I also have no idea how westbound traffic will be accomodated. 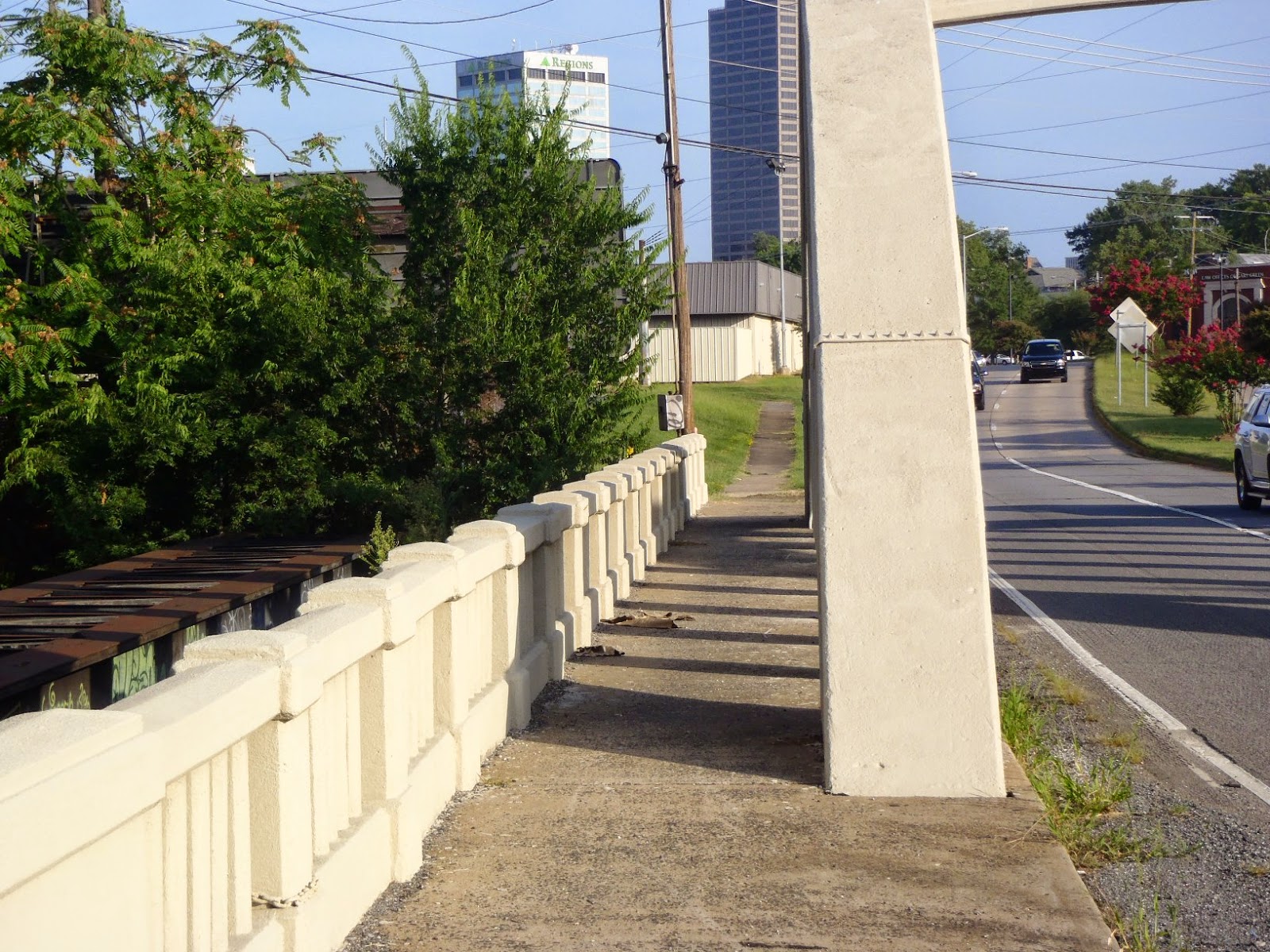 Crossing the viaduct may be safer with a barrier to traffic.
After crossing the viaduct, the sidewalk leads to North Street. From there, riders will need to cross Cantrell at the traffic signals at Izard or at Chester in order to return to the bike route on Markham Street. I waited through a couple of cycles at each of the lights and never got a green light to safely cross Cantrell. I assume they are traffic activated.
A beauty of the bike is that you can almost always pick your way through and around barriers if you know where you are going, whether it be riding on the sidewalks and streets or, worst case, picking up the bike and carrying it. That works OK for locals, but the implications for visitors and tourists attempting to navigate our trail system are a bit murky at best.
There are projects being developed to tie the trail to the sidewalk at this location, but neither will be complete, and likely not even started, by the time the sewer work is done. The pipe replacement in front of the school driveway will have to be done over the Christmas holidays. Other than that, plans for this project are far from clear to me. 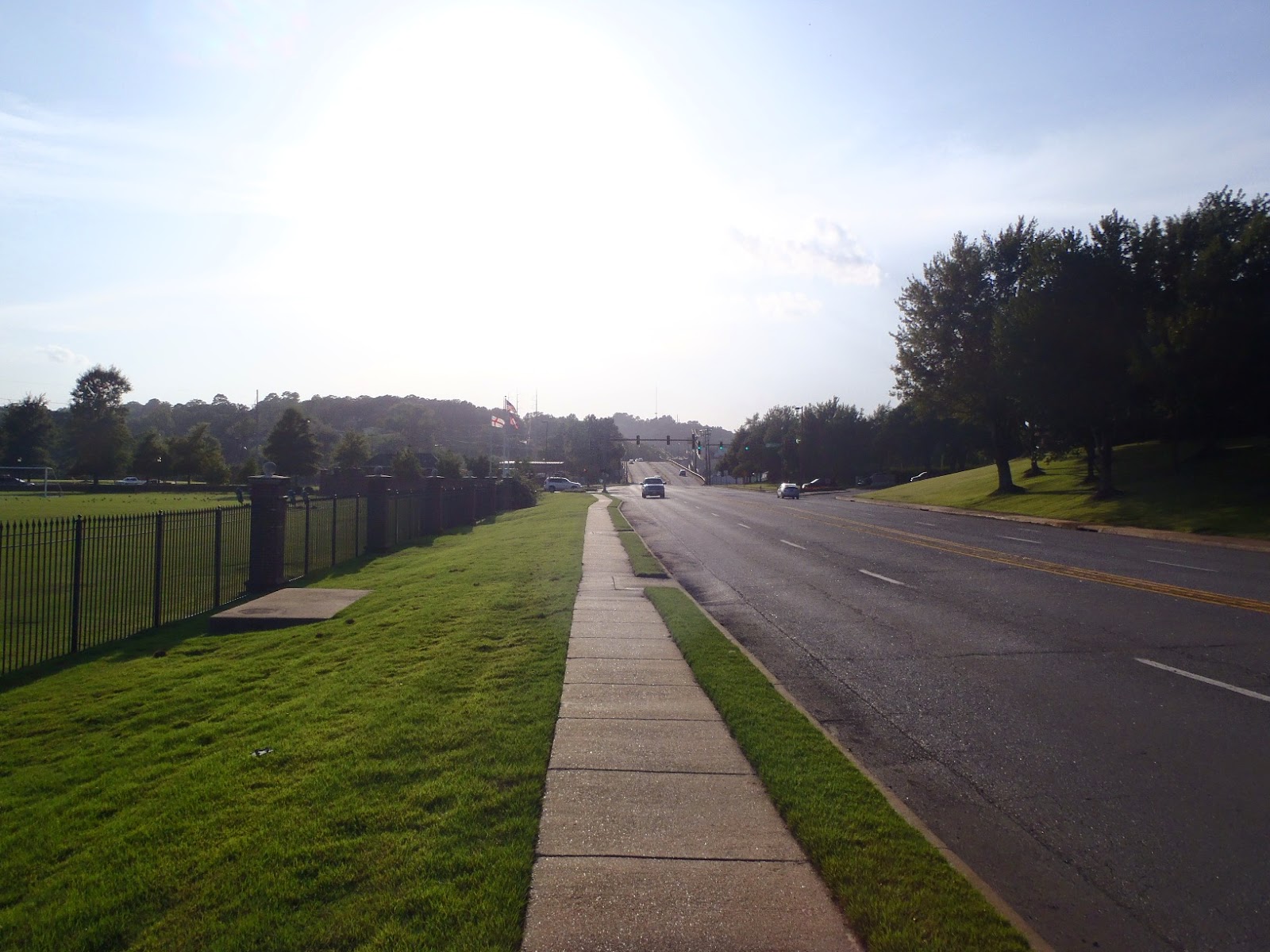 After exploring passage along the north side of Cantrell, the current sidewalk route  looks pretty good.
I don't want to be too strident about this, as there are few options within this corridor. My goal is to inform trail users about what is to come this fall.  If I had any better ideas than the current plan, I would have shared them.

Medical Mile Trail Section- Even as progress is being made toward the start of construction of what eventually be the east terminus of the River Bluffs trail section near Dillard's HQ, another potential problem has arisen. You may recall that a section of trail slid off into the Arkansas River a couple of years ago. That slide was recently repaired, but now it appears that another section of trail, just east of the UP RR tracks, is sloughing off. The seriousness of the problem has yet to be determined, but it could affect plans to bridge the tracks and make the trail connection to Cantrell Road. There may be a problem with the geology here. This is just outside the UP RR right of way east of Dillard's.
Highway 10 Corridor
Look for opportunities to comment on this major project. As I understand, designers of this 10-11 lane rebuilding of Highway 10 west of I-430 have been instructed to make some provision for bike and pedestrian traffic crossing fro Rodney Parham to River Mountain Road. That said, I was recently told that any kind of bike-ped overpass had been ruled out. A suggestion was made at a recent LR Bike Friendly Community Committee meeting that we could await the public comment period. That didn't work too well with the Broadway Bridge as plans were, for the most part, deemed too far along to make substantial changes by the time the public was heard. That was in spite of a design contest that resulted in.....the original plan with some basket handles.
Just talk, for now...
There has been some discussion of a proposal to rezone the park-like residential area at the top of River Mountain Road to commercial to allow for a retail development. I'm told that the chances of this moving forward beyond some inquiries are very slim, but let's pay attention. A big box parking lot at the top of the hill would serve as a sad gateway to our trail system and further exacerbate a traffic nightmare.
Posted by JBar at 10:04 PM