Along The Trail-Dog Days And Progress Reports

Darn these pesky crowds
I often say that if you want some solitude along the trail, you can head out any time the temperature is over 95 or on most weekend evenings in the dog days of summer. Sometimes, though, the crowds can erupt when you least expect them or you can feel like you were the only one left out of the rapture. 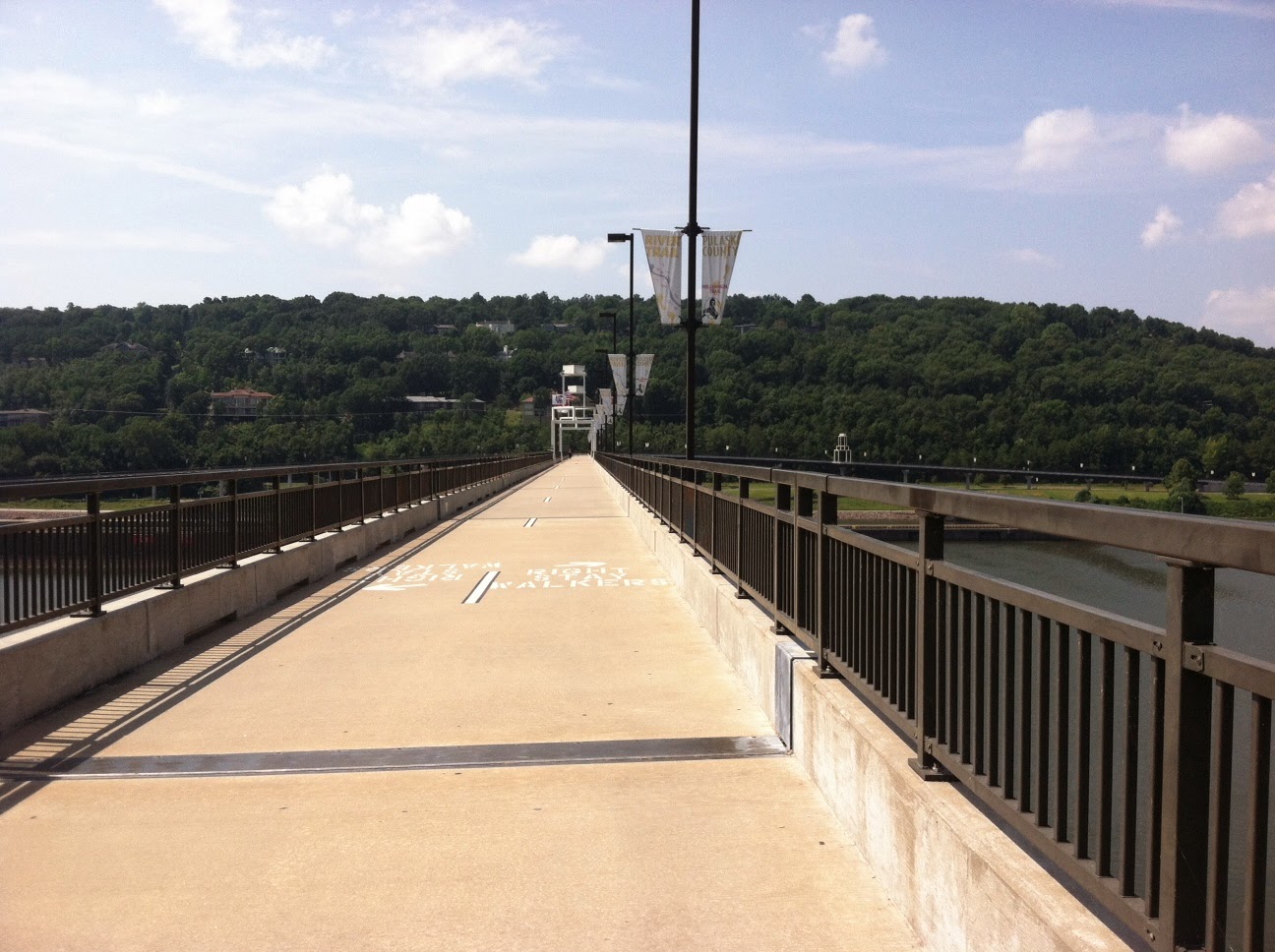 Inexplicable: Last Saturday at noon, temperatures pleasantly in the 80's, a nice breeze, and not a soul in sight.
Our trail system gets a lot of use-over a million people have crossed the BDB- but there are always areas of light usage. Since the opening of the Two Rivers Park Bridge, much of the casual walking crowd has migrated that way, along with riders passing through to the open roads to the west. That leaves much of the North Little Rock trail less crowded than in the past, though still very active.
Open and Shut Case-Culvert Collapse On Trail Along Rebsamen Park Road


We've experienced another infrastructure failure along the River Trail near the BDB. This one was not as painful as the culvert collapse that blocked the trail near River Mountain Road for many months last year, as the bike lanes on nearby Rebsamen Park Road made for an easy detour and repairs were quickly made. 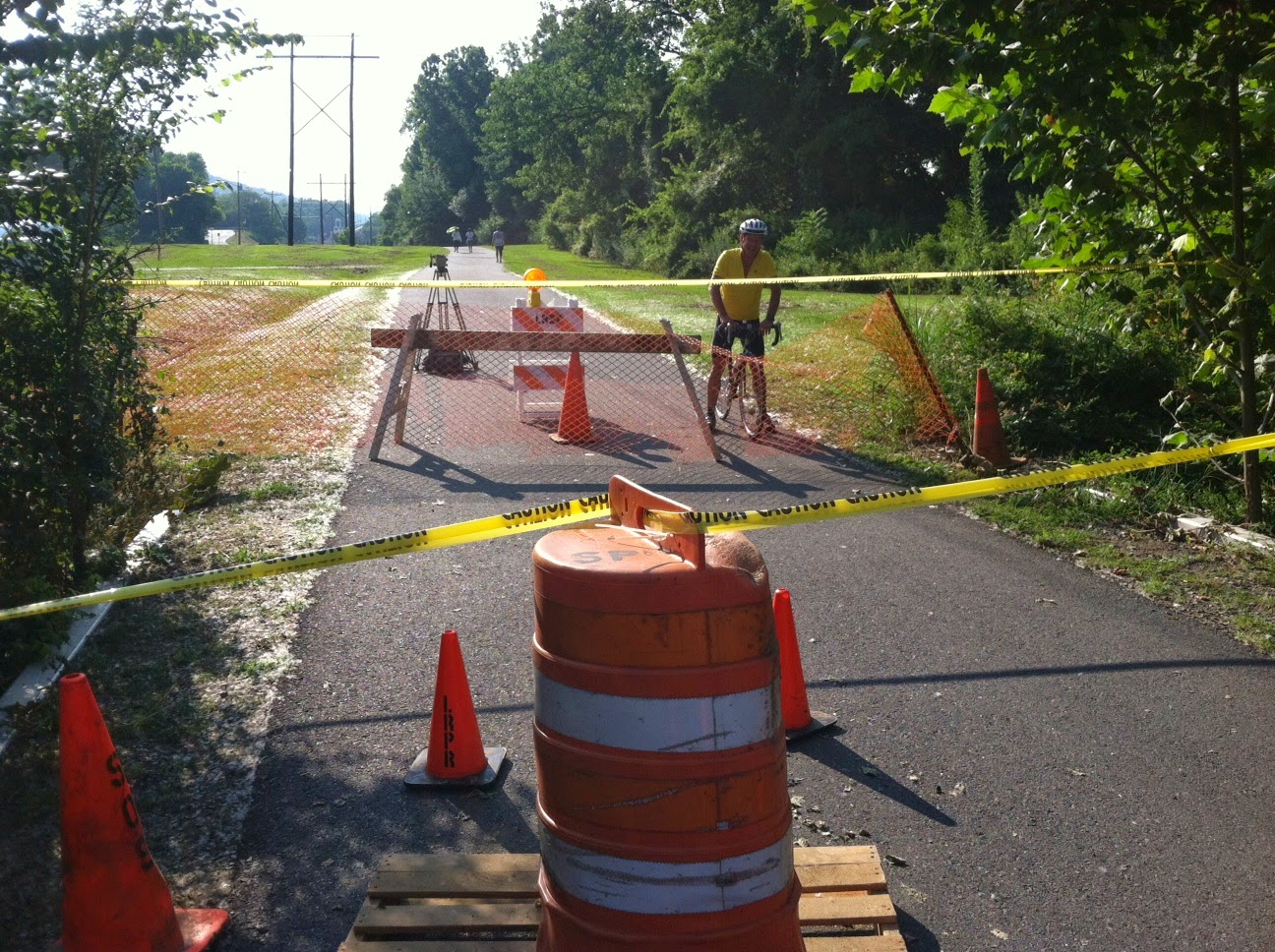 Rider, runners, and walkers found the trail blocked between the BDB and Rebsamen Park on Monday evening. 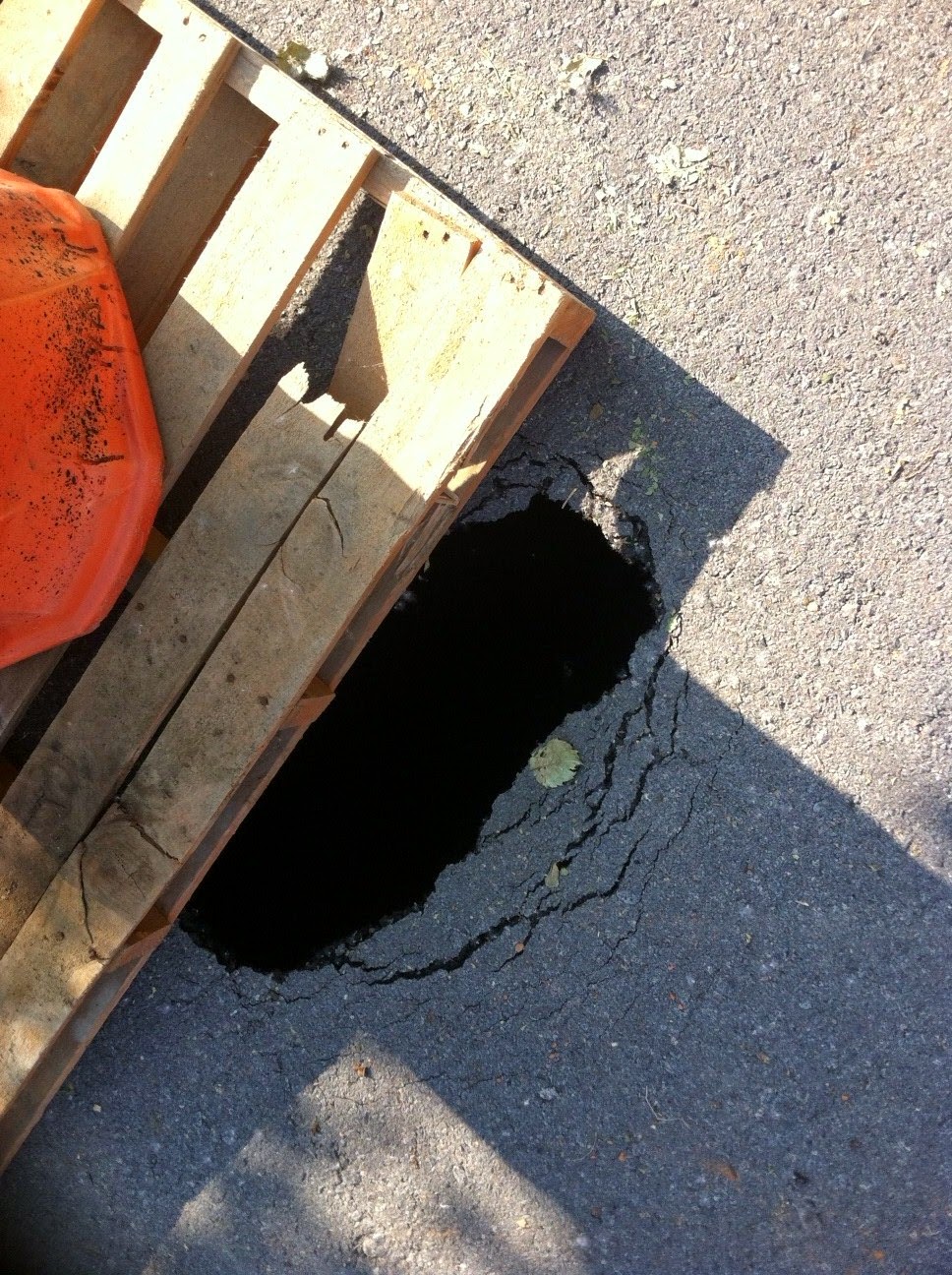 Yep, it's a hole, alright. Trail users discovered this on Monday morning.
A quick look reveals that there is no structural support immediately under the asphalt, leaving an open 6-8 foot drop to the ditch bottom below. I didn't climb down to check out the structure, but I guessed that the trail bridging the culvert would have to be removed and rebuilt. I was wrong!
The trail had been patched by Tuesday according to this KTHV report, and was to open Wednesday. Good work, Little Rock!
Work underway in NLR
River Road 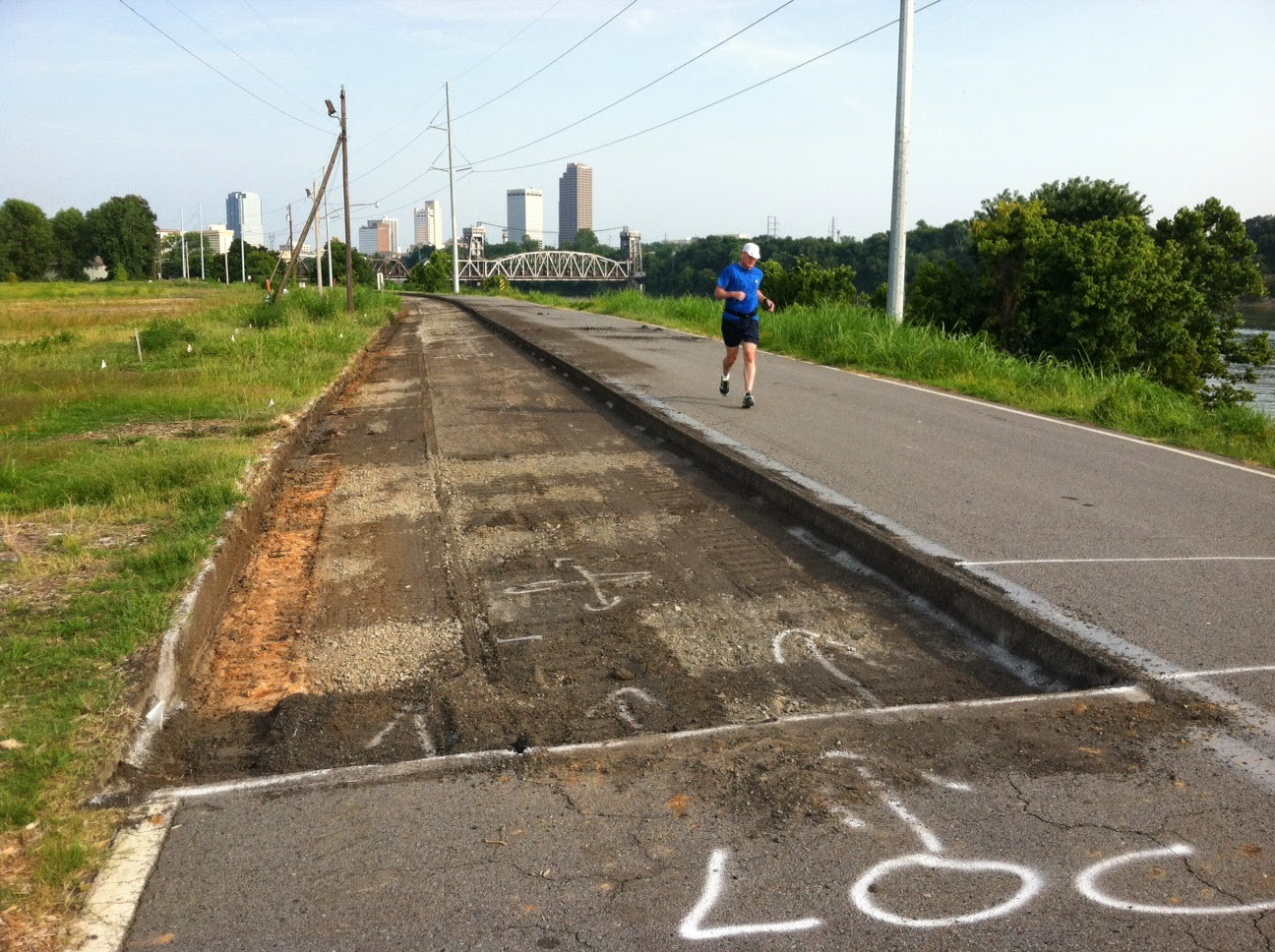 The contractor has milled out the asphalt to make the River Road trail section nominal trail width.
The narrowing of the trail near the Rockwater development is underway, and the trail will be detoured for a month or so as landscaping and lights are added. There is currently a lull in construction, leading many riders to go around the barriers, but the road is littered with gravel and the detour is actually kind of a nice change.
Shillcut Bayou
Construction continues as workers put the finishing touches on the approaches to the new bridge. Riders should continue to use caution in this area. 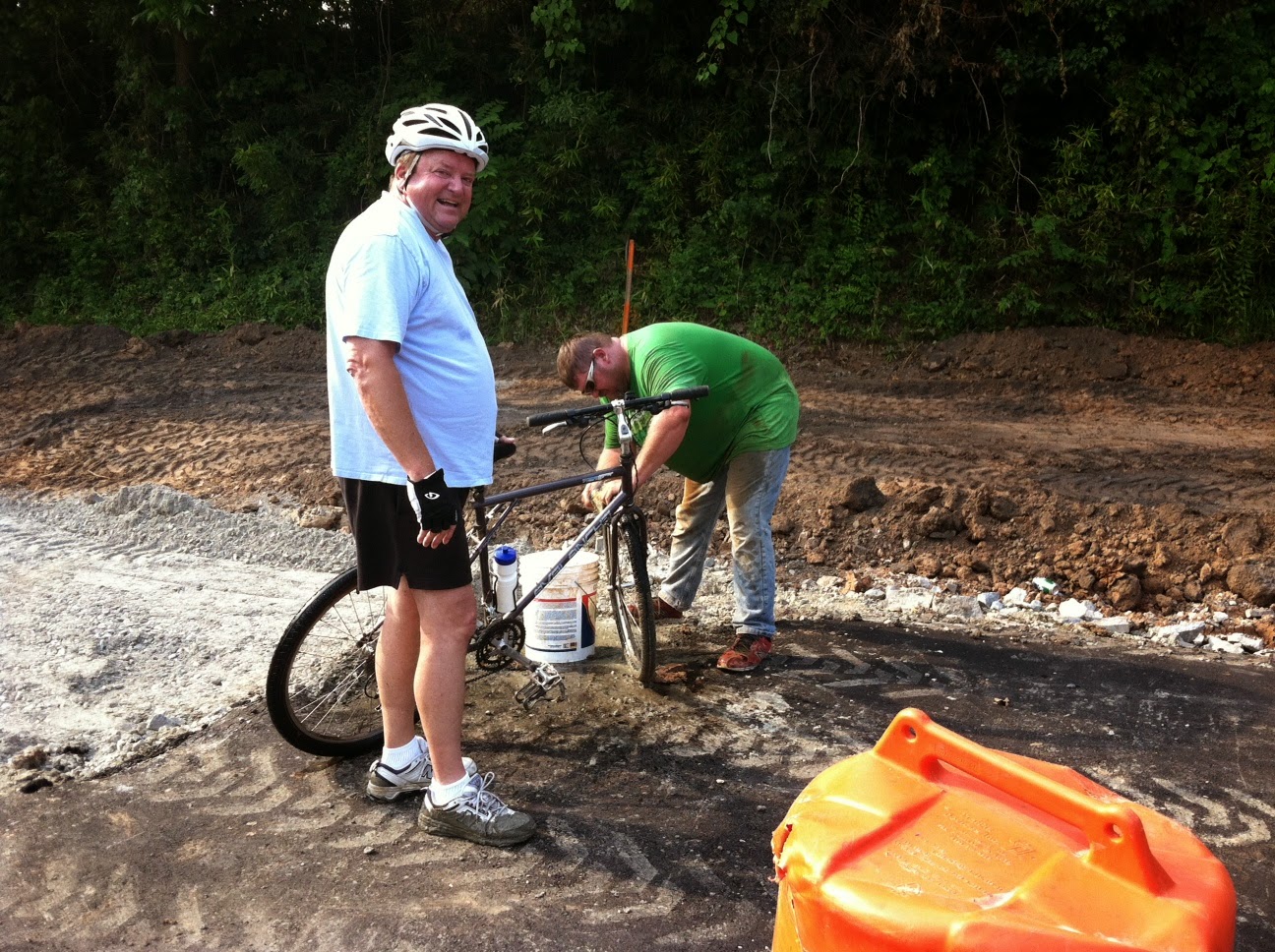 This rider could have used more caution, as he rode into freshly poured concrete. The crew offered him a hose-off and tightened up the barrier of barrels in the area. 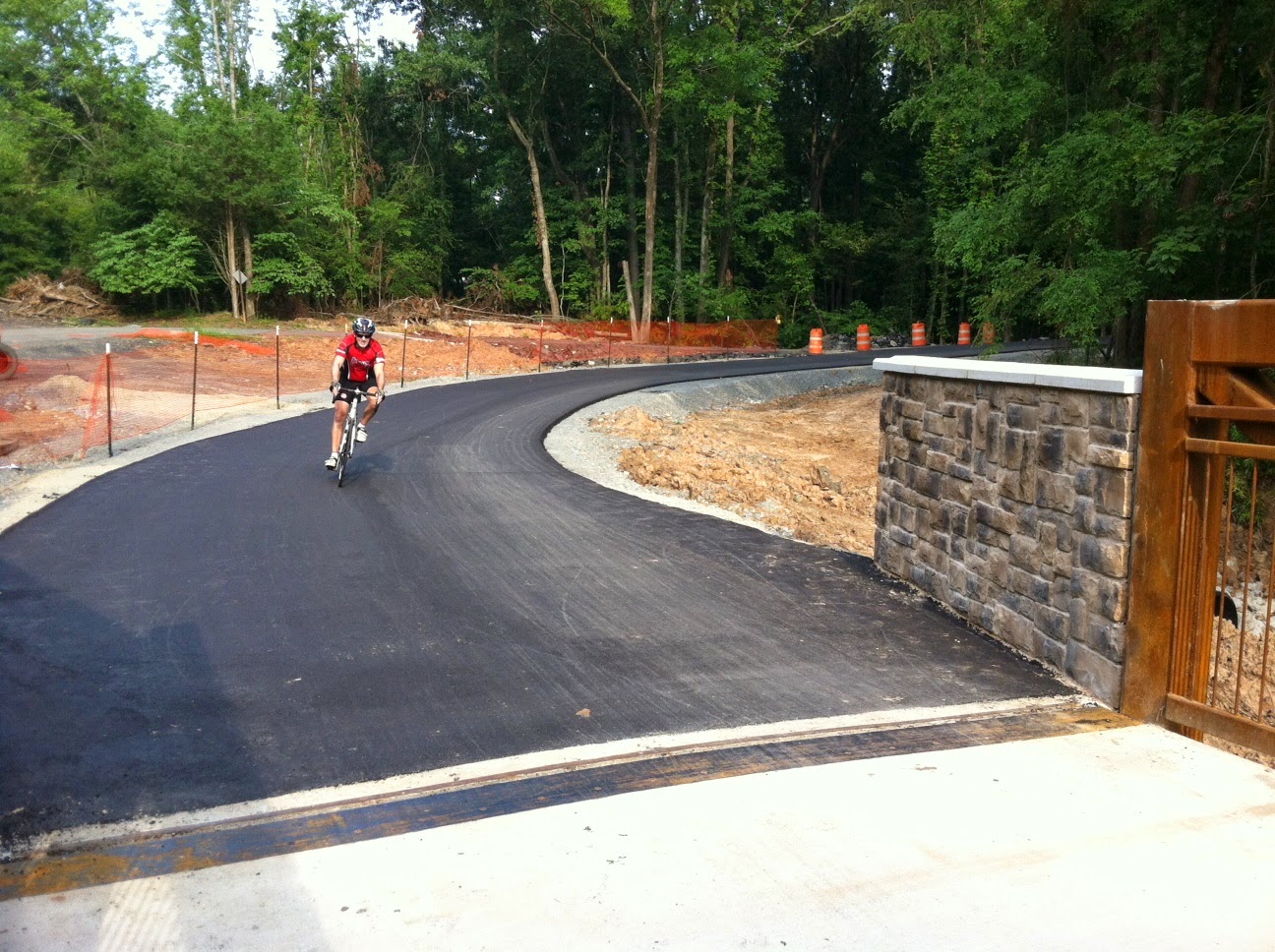 The new approach from the east invites speed. Please use good judgement. 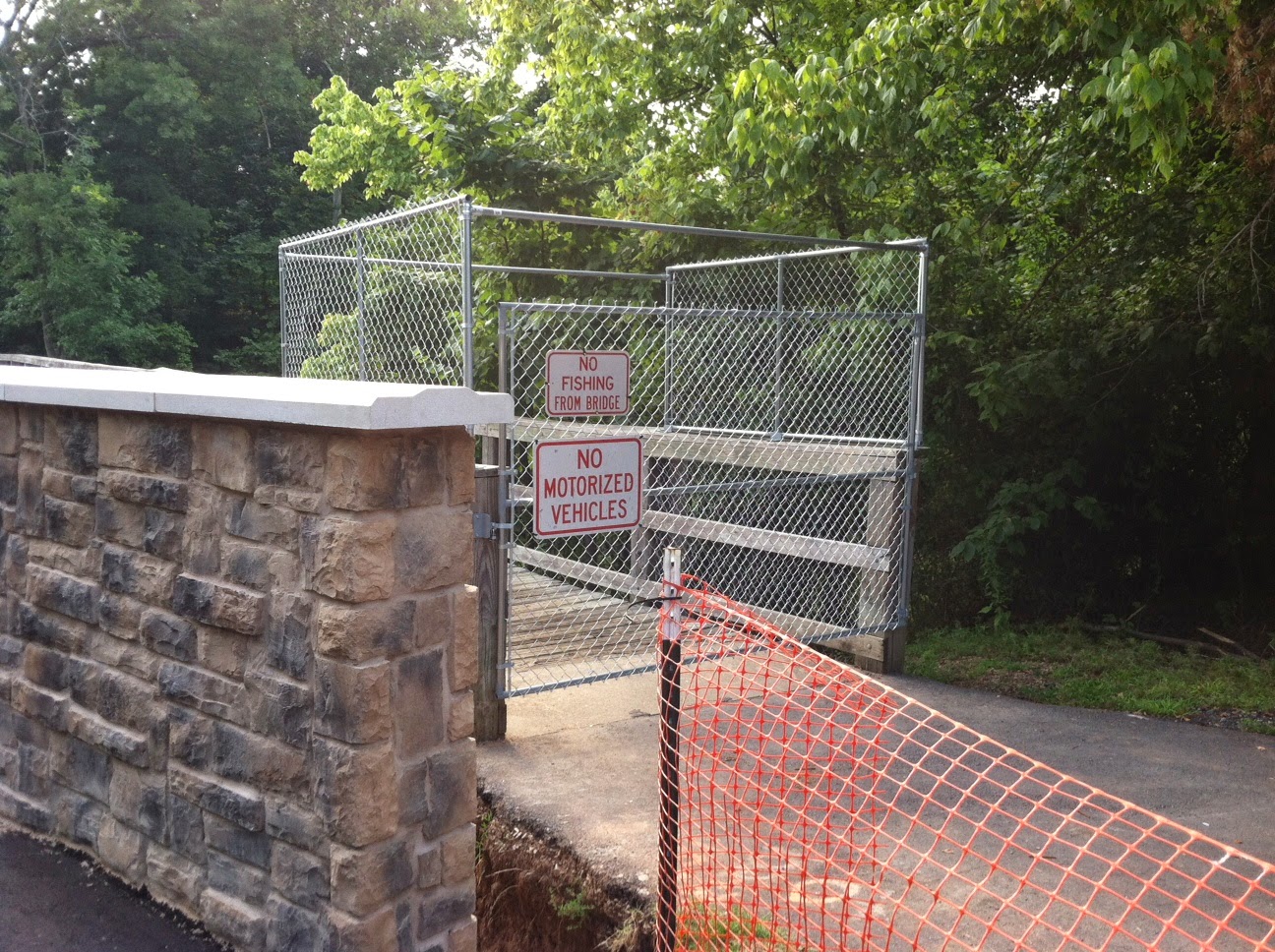 The old bridge is closed.
I'm pleased that attention was paid to the aesthetics of the new structure. While it is a pretty utilitarian design, the approaches are being bordered with pigmented, stamped concrete and rock work at each end adds a lot to the visual appeal. The bridge will be with us for a long time so I'm glad to see the finishing touches.
Go ride your bike!
Posted by JBar at 1:35 PM

I checked out the link for he safety of my readers, as I do get some spam in the comments from time to time.
I've got to say that it gave me a warm and fuzzy feeling. Too bad it's not local.
Drew, you'll like it.