I had a birthday last Sunday and, as many of us are wont to do, I intended to ride miles equal to my years. That ride gets longer every year so I knew it would take a good slice out of my morning. I also wanted to check out the criterium action so I went to the Argenta area early and parked my truck at the flood wall near the finish line before embarking on my ride.
I dutifully knocked out my miles, along with many bottles of water and sports drink, and got settled in just in time for the kids races. There were some talented youths ranging from pre-teens on race bikes to toddlers on striders. CARVE is doing a great job of encouraging young people to embrace the sport. It was all good fun and the crowd loved it. 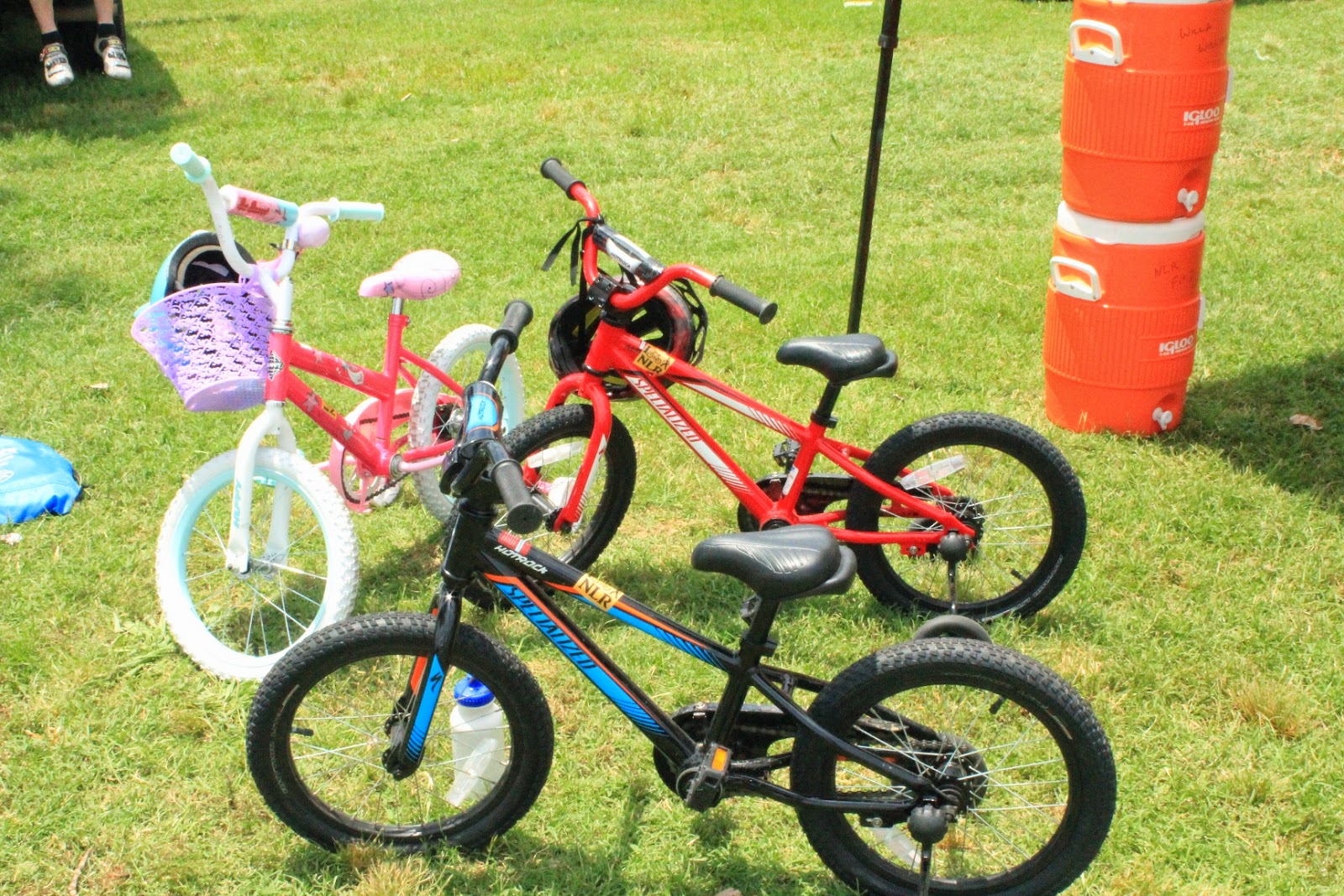 Built for speed-Race Bikes!
My favorite moment was also a lesson in sportsmanship as a young man cruised toward the finish, looked over his shoulder to judge his big lead, and then decided to cruise to the line with his hands off the bars in casually cool victory. Nice move, kiddo, except the rider behind him was having no part of it, jumping out of the saddle and hammering out a sprint that pipped the showboat at the line. It was fun to watch the sprint unfold, as it was obvious to everyone in the viewing area that the gap was being closed down. There have been some Pro Tour riders who have famously taken second place by way of early victory celebrations, so it is not just a foible of the inexperienced. There's a reason they call it a finish line.
The Masters race followed and proved to be some good racing. Well into the race a beer prime was announced, so there was the usual acceleration to the line for the prize. Robert Mooney, racing for Arkansas Cycling and Fitness along with Richard Machycek, took the sprint and a big flyer, as he simply rode away from the pack. 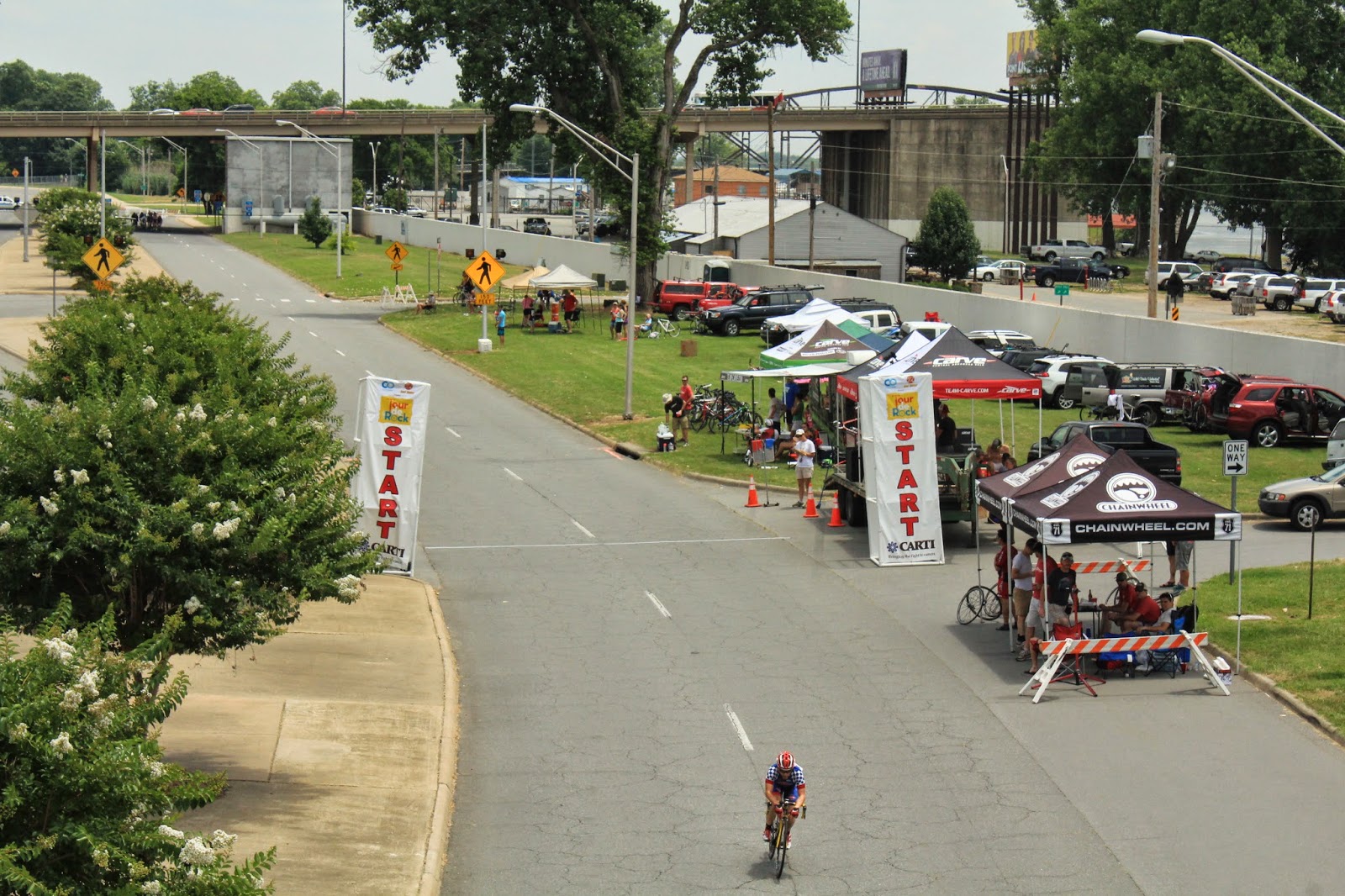 Mooney's lead stretched out to about 35 seconds.. 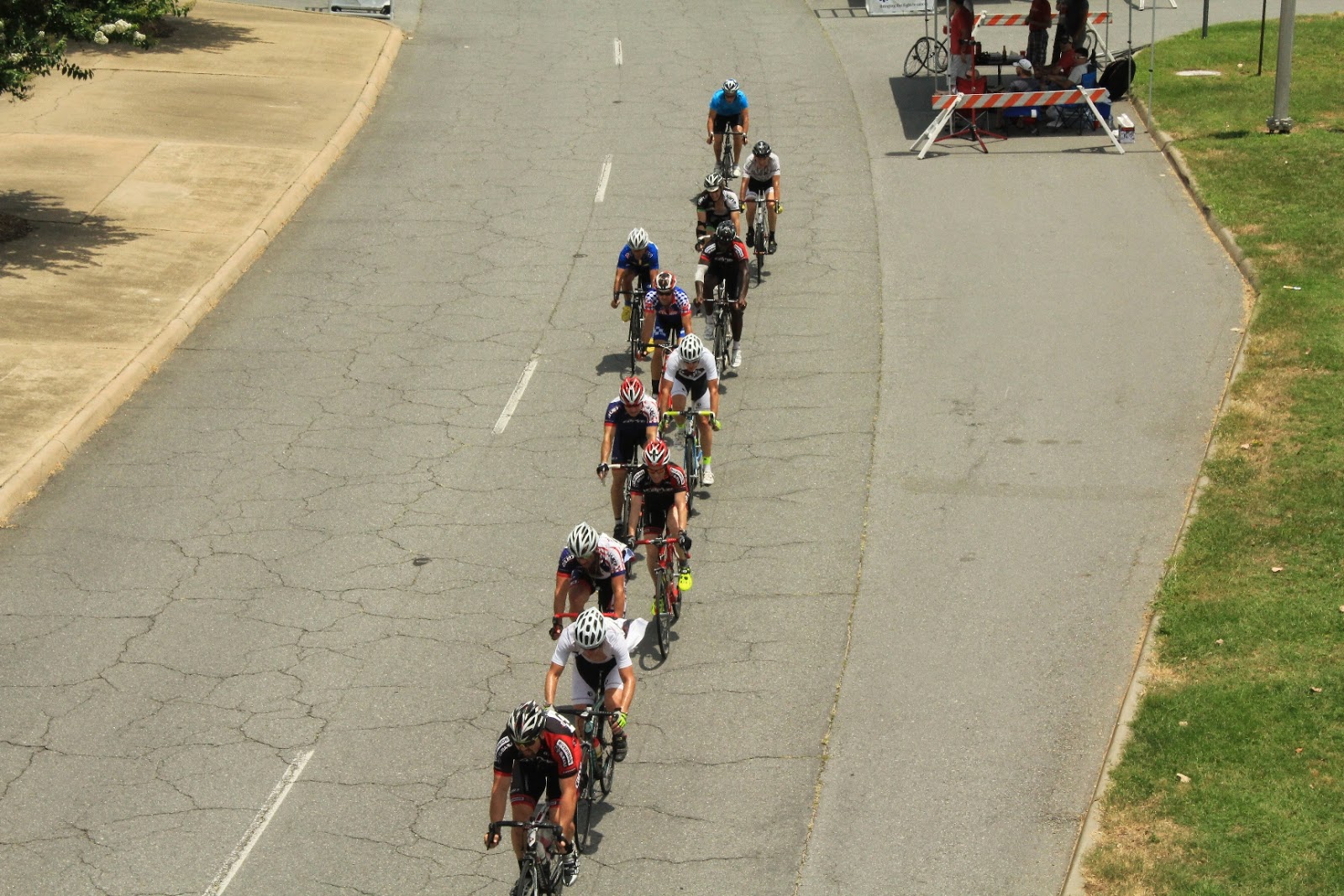 The chase was on. Machycek could just sit in, doing no work, as the pack pursued his team mate. 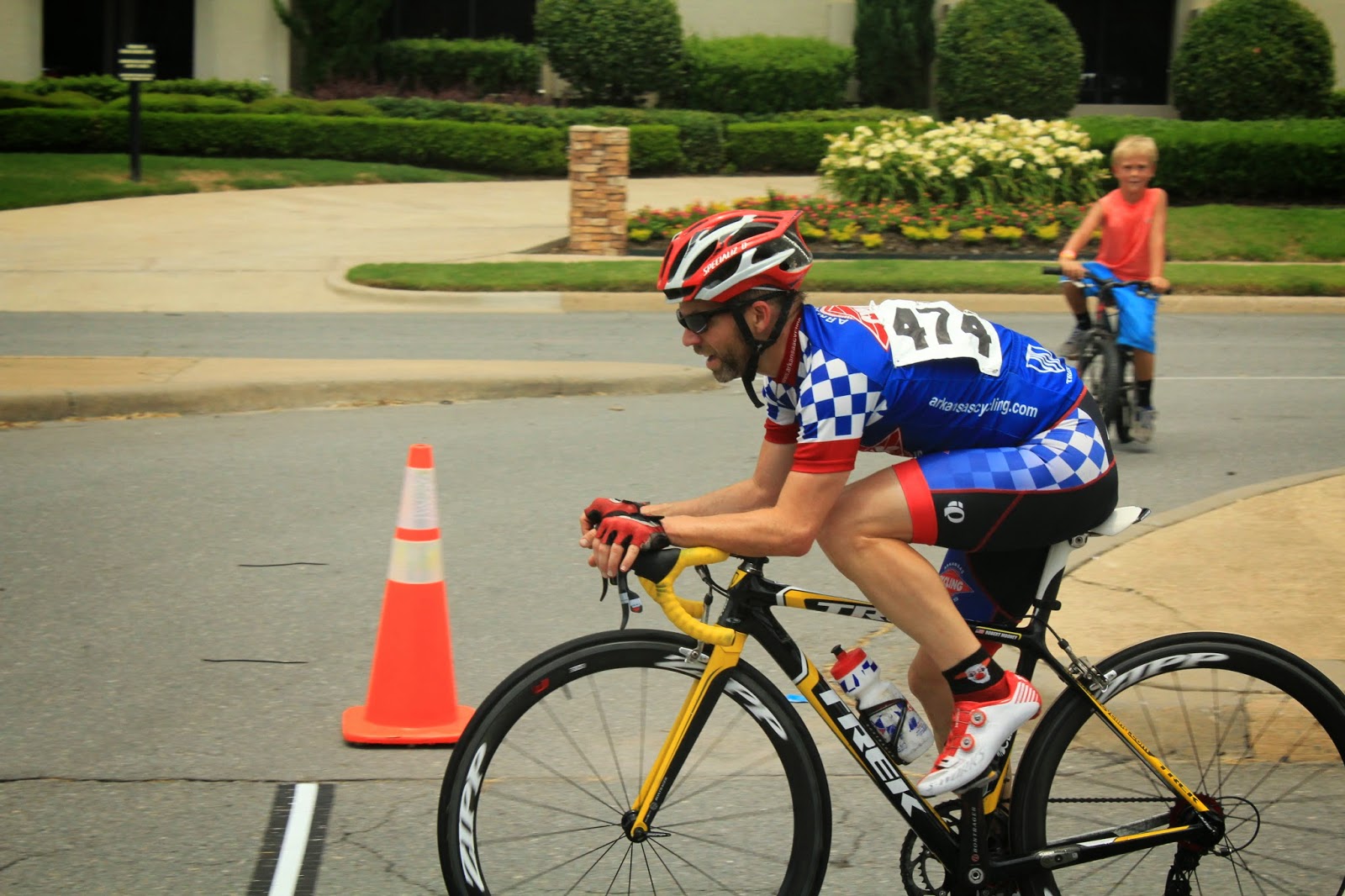 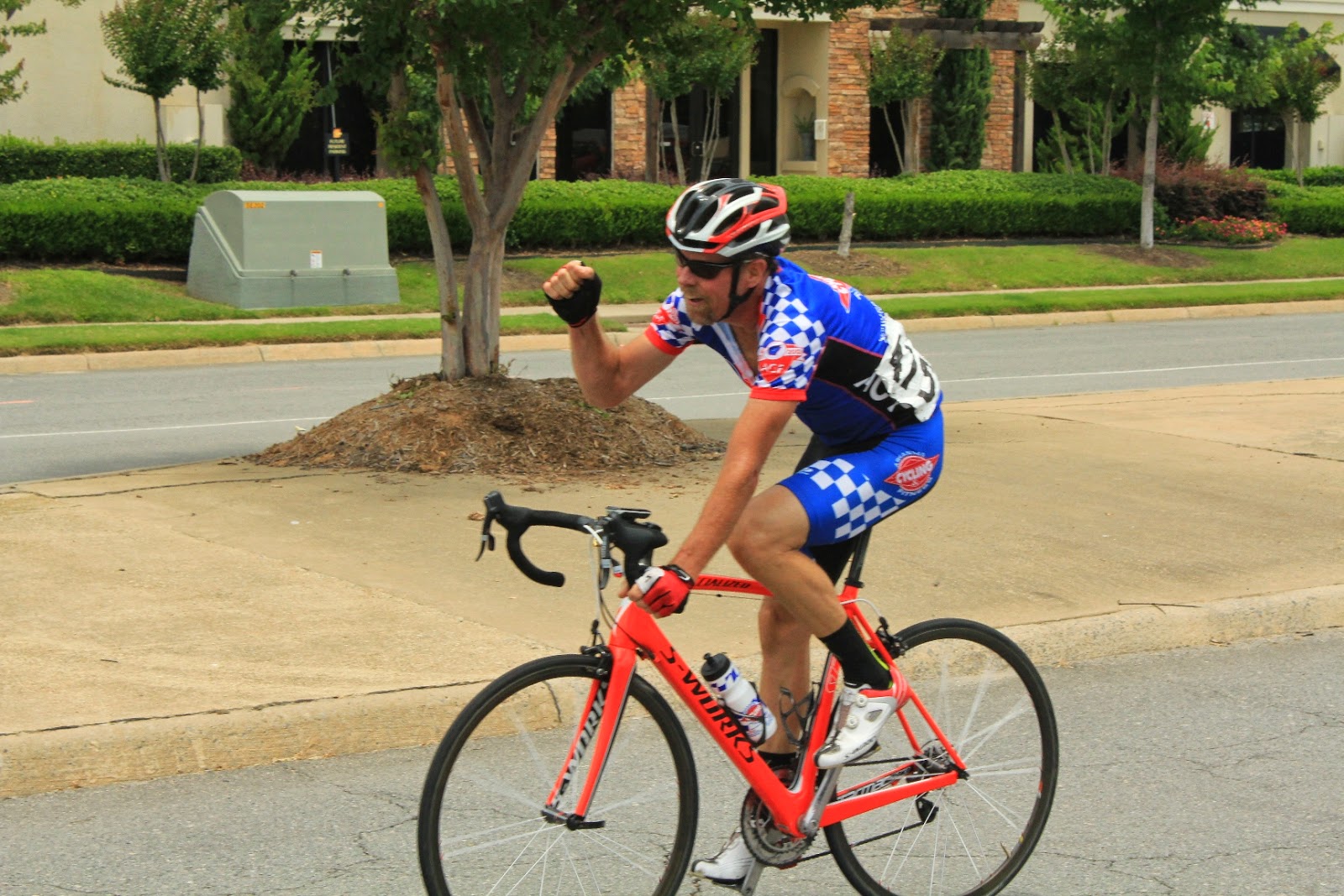 and Richard took the sprint for second.
It was a nice well-deserved 1-2 finish in the Masters race for the AC&F boys.
The CARVE bunch created another well-run, enjoyable event. I think both the race fields and the crowds may have down a bit from in previous years, but that may be at least in part due to the success of bike racing in central Arkansas. Some local racers were participating in bigger races elsewhere; such as Hunter and Evan East at the Tour of America's Dairyland, and Alex Bumpers who has been racing in Belgium. The East boys had take 1st and 2nd place in the Burns Park crit series. There was also the Dawg Days Cross Country MTB Race on Saturday that pulled a lot of local racers. As the local scene grows, more and more talent is rising up through the ranks.
Good job, folks, and thanks.
I only took a few photos on Sunday, but Cliff Li, whose work often appears at ArkansasOutside graciously permitted me to link to his Facebook album of the event.
﻿
Cliff Li Photos
Posted by JBar at 9:16 AM