Along The Trail: Catching Up

Another Colorado vacation is in the books and I'm behind on everything everything writing to bush hogging, not to mention that paying job of mine. Here's a little catch up of trail happenings.

Shillcut Bayou Bridge:
Construction of the replacement for the much maligned wooden bridge at Burns Park is progressing nicely. The new bridge will have concrete deck and is wider than the old bridge, which will stay in place. Many people enjoy simply standing on the old bridge to look at the water and it will be much more conducive to relaxation without cyclists rumbling by inches away. There is no reason to remove the old deck as it was built over a wastewater force main so the primary structure isn't going anywhere. 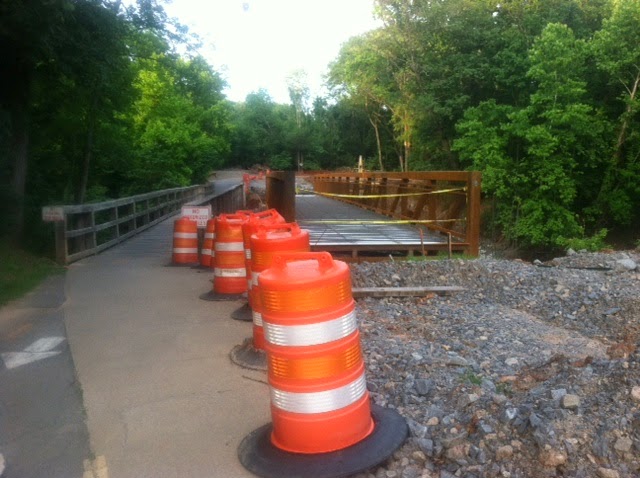 Damn, I thought I was done with orange barrels when I got through Oklahoma on I-40 earlier in the week.
So far, the trail has only been closed for two days to facilitate installation of the new bridge primary structure and to place a culvert under the trail. I expect we'll see a few more brief closures before the project is complete.

Explorer pavilions are open for business

The two pavilions built as and EagleScout project near the trail in Burns Park are complete and ready for use. Since the photo below was taken, some landscaping and signage has been added. 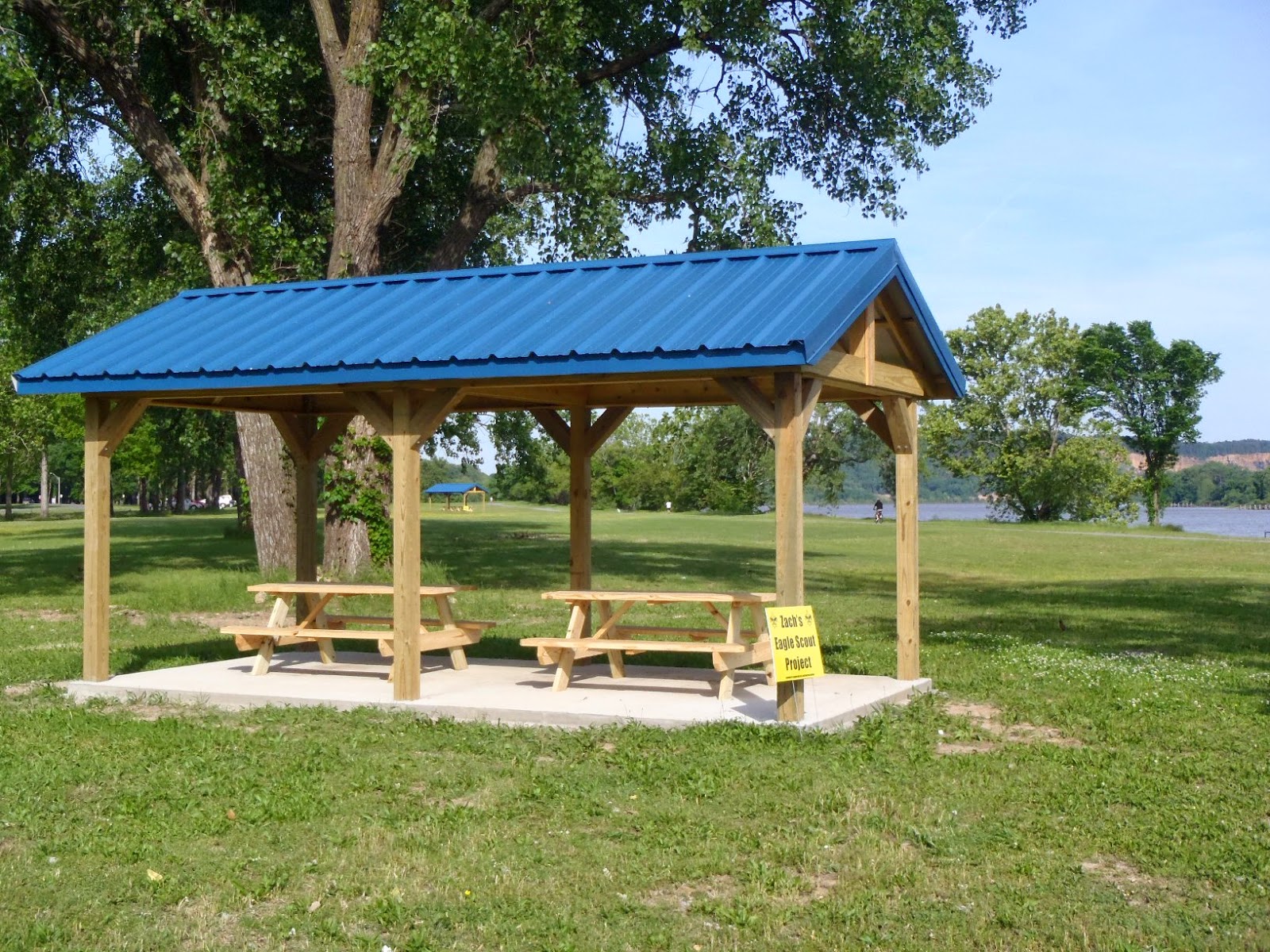 Eagle Scout Zach Baxla dedicated  the pavilions to native Americans and to Wounded Warriors
The pavilions are available on a first come-first served basis, with no reservations required or accepted.  They would be a very nice venue for an evening ride, followed by burgers along the river. If any of you get that together before I do, invite me!

The pump at the work station near the Two Rivers Park Bridge has been vandalized and the handle is completely gone. I came across a rider who had already connected  the pump to his valve stem to top off a low tire before realizing it was inoperable, resulting in a completely flat tire. He was a new rider, but appropriately equipped, so I showed him how to use his CO2 inflator and he was on his way.
The pumps at the stations near the Two Rivers Park restrooms and at Fike's Bikes in Argenta have both been replaced with tamper resistant pumps. Hopefully, there is funding available to place one of those pumps at Two Rivers bridge, as the work station there gets a lot of use. I haven't I think that most of the damage at the work stations is perpetrated by unsupervised kids who are allowed to play on the stations as opposed to a'hole purposeful vandals.

I guess it could be considered the end of an era as the Competitive Cyclist building in the NorthShore Business Park has been sold. It was exciting to watch the small Bikeseller evolve into an international online retail powerhouse as Competitive Cyclist, and it was a little sad to see them leave as they were sold to Backcountry.com 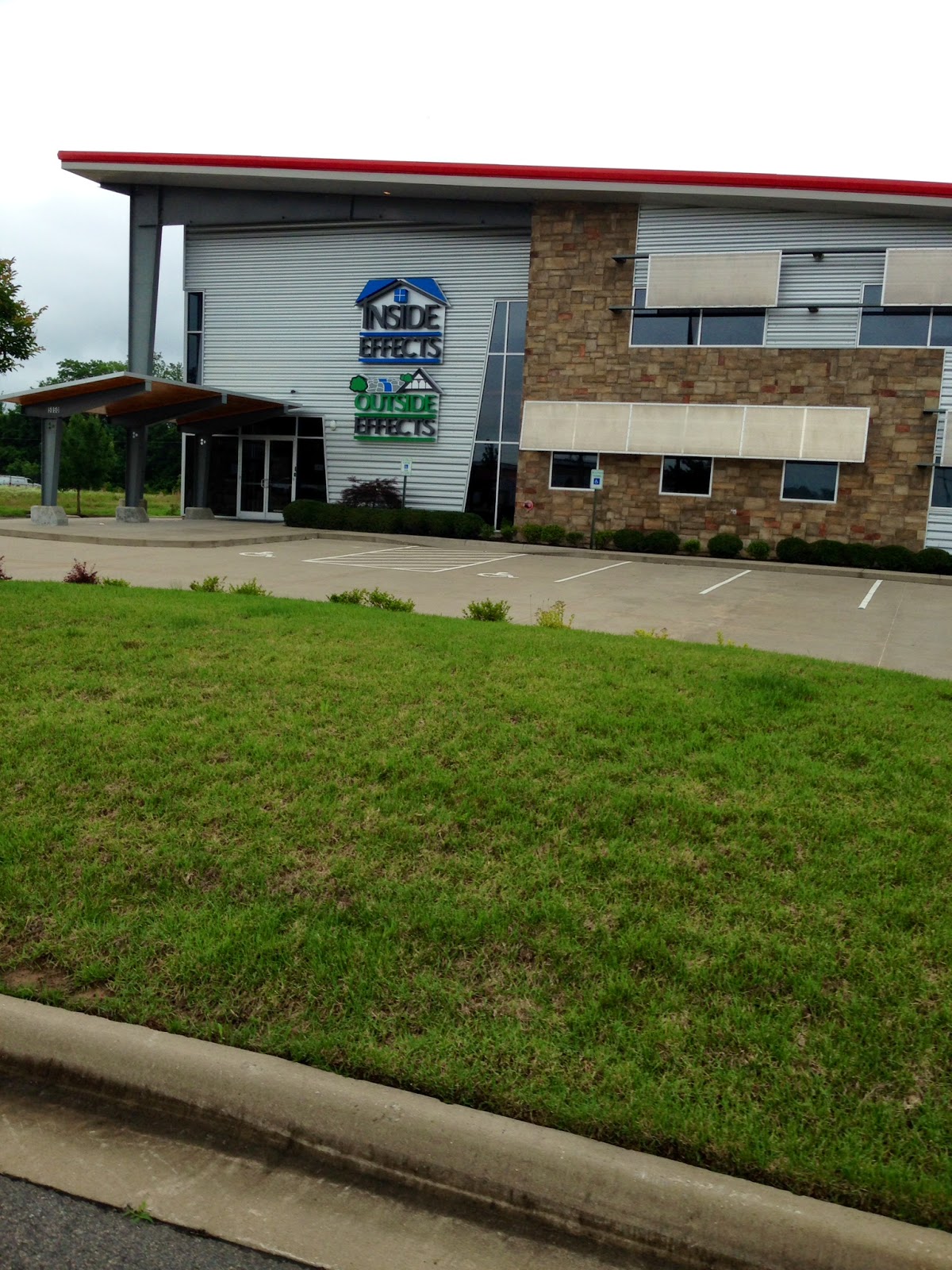 Inside Effects Outside Effects
Thanks to Dan Lysk for this photo.
We have a number of very good local bike shops, but Competitive Cyclist had a huge inventory of almost everything to do with bikes. Local shops can order you anything, but few can support such a huge stock of components and parts. The local trade had become a very small part of a big business at CC and, while they no longer supported a retail storefront, it was very convenient to order a component or other item and be able to ride by and simply pick it up off of the "will call" shelf.
Now, you can go to the same location and plan a kitchen remodel or pick up a Big Green Egg.
They're back... 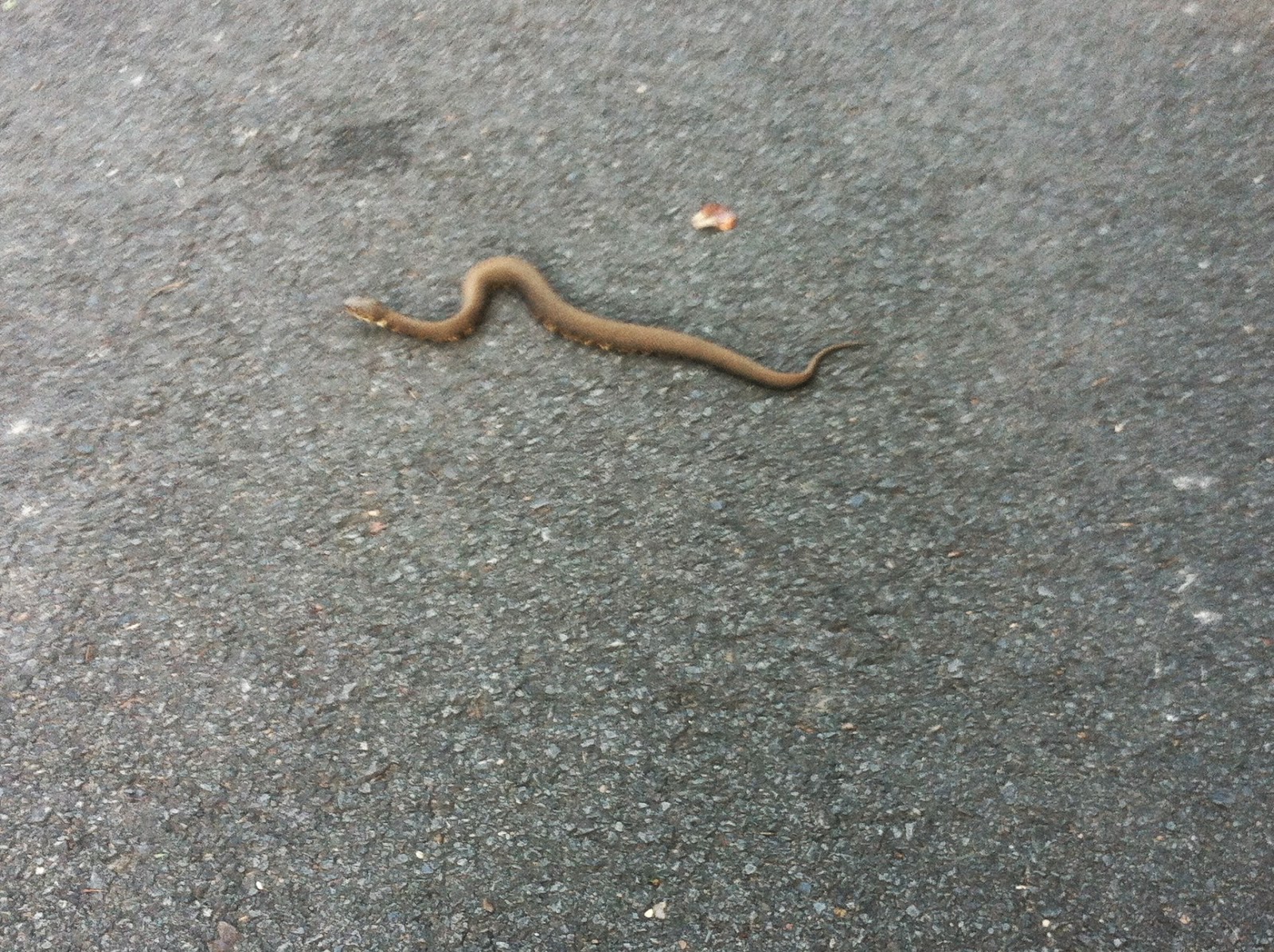 Snakes are very common on the River trail, especially in Two Rivers Park. Many are cottonmouths or copperheads, so they deserve respect, but there are also many nonvenomous species.
I've been accused of posting a lot of snake photos here, but they are simply a part of the trail environment. I'll sometimes stop and encourage them off of the trail, but for the most part they mind their own business and I mind mine.
﻿
Posted by JBar at 10:02 PM

Kudos to your mention of the new pavilions in Burns Park, but a minor correction: they were built as an Eagle Scout Project, not an Explorer Scout Project.

I should read my own posts regarding the Eagle scout project.