A couple of years ago, Arkansas had the dubious distinction of being named by the League of American Bicyclists as the least bicycle friendly state in this great land of ours. 50th out of 50. While we regularly rank near the statistical bottom in areas like obesity, children's health, poverty, education, and income, being DFL is usually reserved for Mississippi. Among the major strikes against us were the lack of a statewide bicycle plan and the absence of a statewide advocacy organization.

The poor ranking served as a bit of a wake up call for Governor Beebe and members of his staff, as he set up an advisory committee to determine some of our needs and pulled representatives of  the AHTD and Arkansas State Parks and Tourism among others. We are starting to see some movement as a result, and that bit of progress was demonstrated at some recent meetings held around the state.
This was the announcement for one such meeting:


The Arkansas State Highway and Transportation Department and Arkansas Department of Parks and Tourism have undertaken a contract to update the Statewide Bicycle and Pedestrian Plan.  Their consultant team will be conducting stakeholder meetings throughout Arkansas this spring. 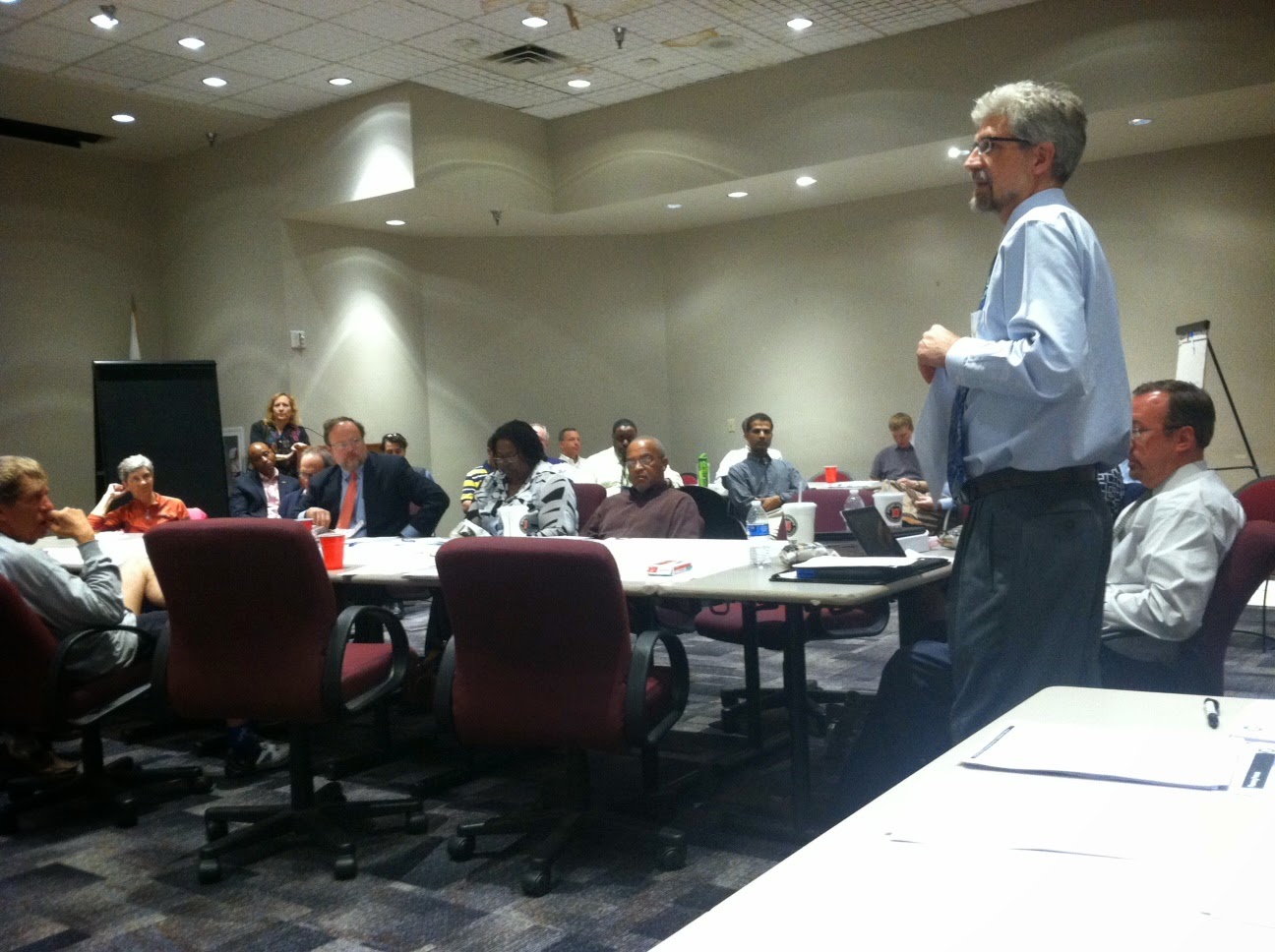 This stakeholder meeting at Metroplan was followed by some public meetings, including one at the UALR Stephens Center.
What do these signs of progress mean to us as riders? It's really hard to say with any certainty, but the very fact that the state agencies, especially the highway department, are involved is a move in the right direction. While Parks and Tourism is and has been on board with the promotion of cycling, my view is that AHTD has regarded cycling and demands for infrastructure support as a nuisance. They've given us a little lip service along the way, but have largely ignored calls for serious engagement in the realm on non-motorized transportation (See: Broadway Bridge discussions). Though the AHTD is a constitutionally independent entity with its own funding stream, commissioners are appointed by the governor. That means that Gov. Beebe can still demand attention when his office makes a call-to-action. It's an election year, and I can only hope that Mr. Beebe's replacement will, at the very least, allow the current bit of momentum to survive.
Any results from these meeting will likely be years in coming, but they will come, and we've can only start from where we are. This is all political. Mention bicycle-pedestrian plans to every politician that approaches you for your vote (and you'll have plenty of chances this year!). Let them know that voters want transportation and recreational alternatives because they are good for public health and good for business. Cycling infrastructure has been proven to draw educated, employable young people to those communities that have embraced these quality of life developments. If you have any doubts, shuffle on down to the River Trail this weekend. You'll see what I mean.
Highway Commissioner Robert Moore speaks at BACA
Commissioner Robert Moore spoke at a recent BACA meeting. As has been the case at recent BACA meetings, the meeting room at US Pizza, Hillcrest, was packed with around 100 people. Mr. Moore, former Speaker of the Arkansas house of Representatives, was welcomed warmly, and he spoke in a  humble, congenial manner. I'm not sure what we expected, but what we got had very little to do with the AHTD's view of the future of cycling. Moore mentioned his participation in the Tour de Hoot and his support of the event; however, he spent the majority of his available time bemoaning AHTD's lack of funding. He presented facts, figures, charts, and tables to demonstrate the financial woes facing the road builders, making it clear that he considered his constituency to be cars and trucks. Much of our highway funding comes from fuel taxes and, as fuel usage has been reduced over the years, revenues have followed. There is no political appetite for raising fuel taxes, so the highway department seems to have set its sights on some of the state's general revenues.
Voters recently approved a sales tax that will be used to repair and maintain interstate highways across the state, but a bill to increase transfer (sales) taxes on new and used cars, tires, etc, failed in the legislature. This bill be come back in the next legislative session. I don't think most voters realized that the sales tax dollars were going primarily to the interstates, which is in large part a subsidy of the trucking industry.
Mr. Moore threw the possibility of a bone to the BACA crowd when he said that the commission would "look favorably" at using some Transportation Alternative funds if the cycling community provided substantive support for the  the proposed transfer tax. He also said he'd be open to taxing the sale of bikes and related goods to provide the AHTD with some funding.
Mr. Moore is by all accounts a good guy, and he is likely a good highway commissioner, but very little he said made me think that the AHTD was ready to move away from being the "Department of Cars and trucks".
Though I was disappointed in Moore's message, one in which he seemed oblivious to the venue and the audience, I was still glad to see him there. Institutional change is slow, but the very fact that we're engaged in a conversation at the state level is a good sign. Mr. Moore is a politician and, though he's not running for office and his agenda seemed to be all about siphoning more money to his department, he could not ignore that fact that 100 people showed up as an expression of their own agenda to promote cycling in Arkansas.
﻿
Posted by JBar at 1:59 PM