Along The Trail: Skunks, Scouts, and Girls' School

The weather has continued to limit activity along the Arkansas River Trail. It has just been cold and as a result not many folks are getting out. The numerous group rides that are usually well under way by this date are just sputtering to a start,  parking lots that are usually overflowing are half-full, and I've hardly had to complain about all of the inconsiderate assholes in my way. That said, time marches on, it looks like we are finally turning the corner to warmth, and there are still happenings along the Arkansas River Trail.
In case you needed another reason not to pet the skunks... 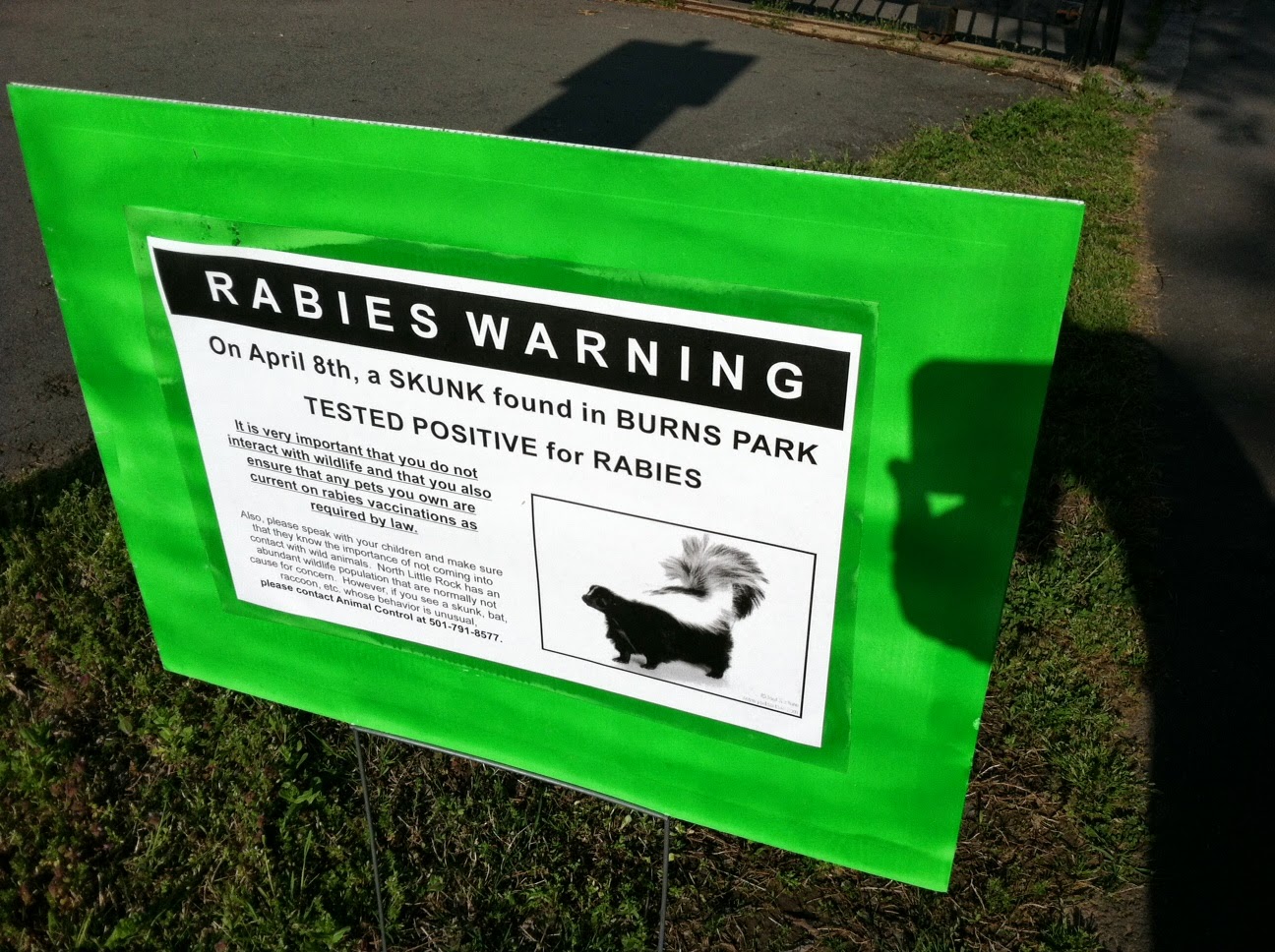 This warning was posted at various Burns Park locations after a skunk tested positive for rabies. 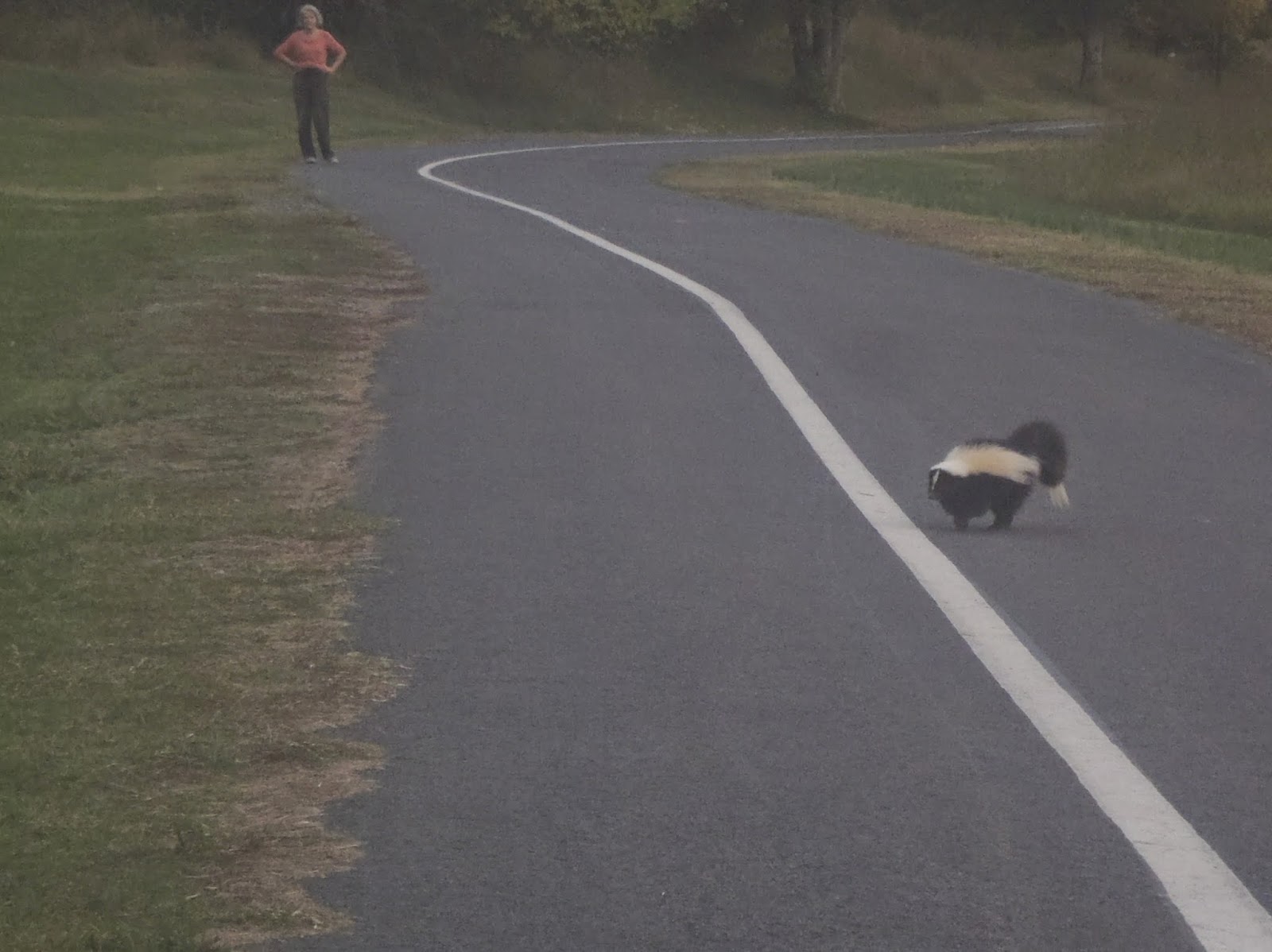 This is NOT a kitty with sporty stripe kit.
Skunks are numerous in Burns Park and in Two Rivers Park, and are a common sight for evening and nighttime trail users. Most of us don't need much encouragement to give them plenty of space, but be particularly cautious of nocturnal critters taking a daytime stroll or that appear to be ill.
Eagle Project In Burns Park

"The eagle flies on Friday, Saturday,I go out and play...."
Well, they call that song Stormy Monday, but both held true for me last weekend. As I rode through Burns Park last Friday afternoon I spotted some signs of a construction project along the trail near the fishing pier. Some folks were sitting around the site enjoying the evening so, of course, I had to stop to find out what was going on. I found that they were preparing to start work on a couple of 10'x 20'picnic pavilions as an Eagle Scout community service project. Appropriately, they were also observing a mature bald eagle that was soaring overhead. I'm not sure what that meant, but it must have been a prodigious sign of something! 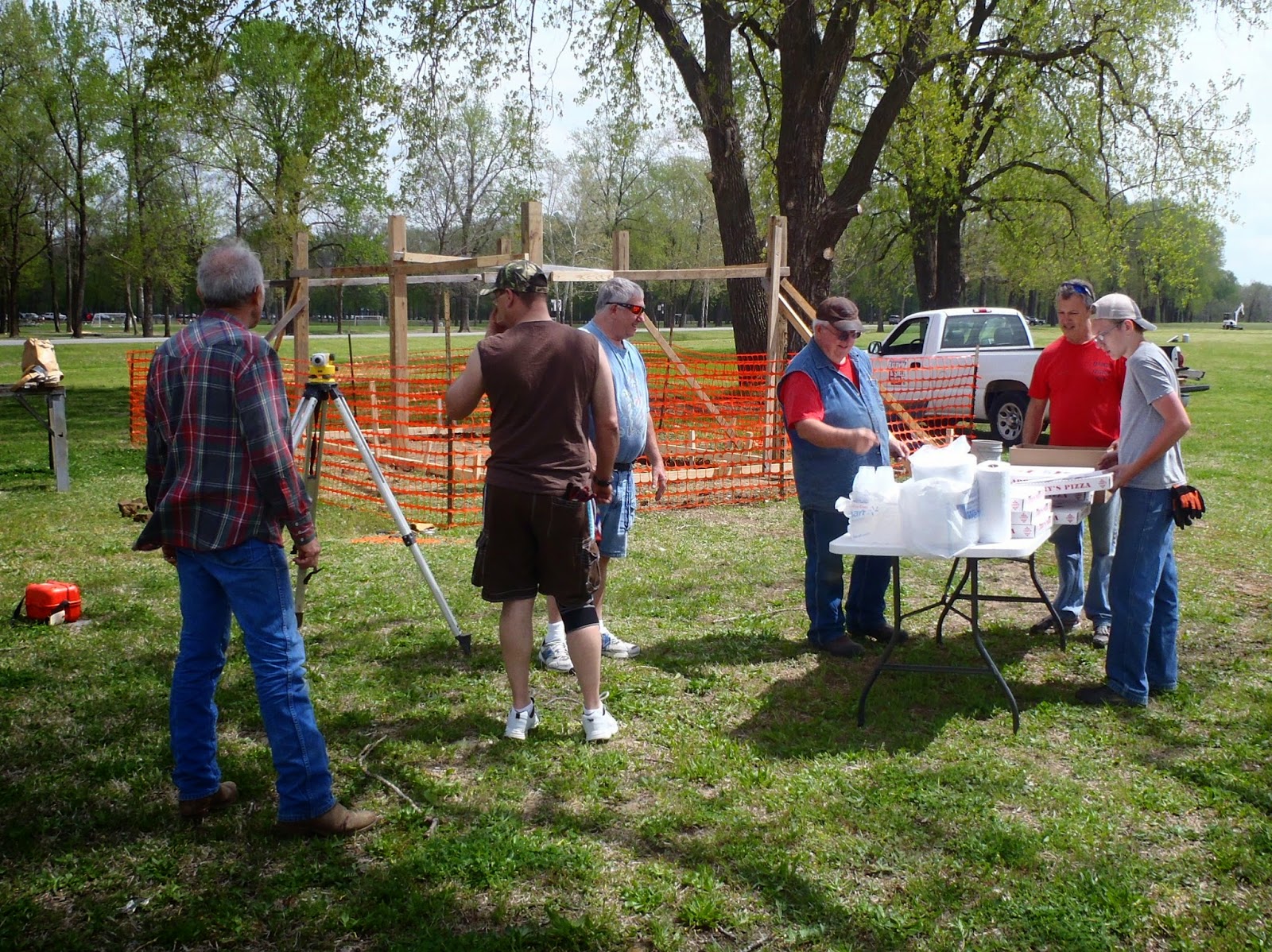 Saturday lunch break. Zachary Baxla, at right, is building two pavilions with the help of donated materials and volunteer labor. 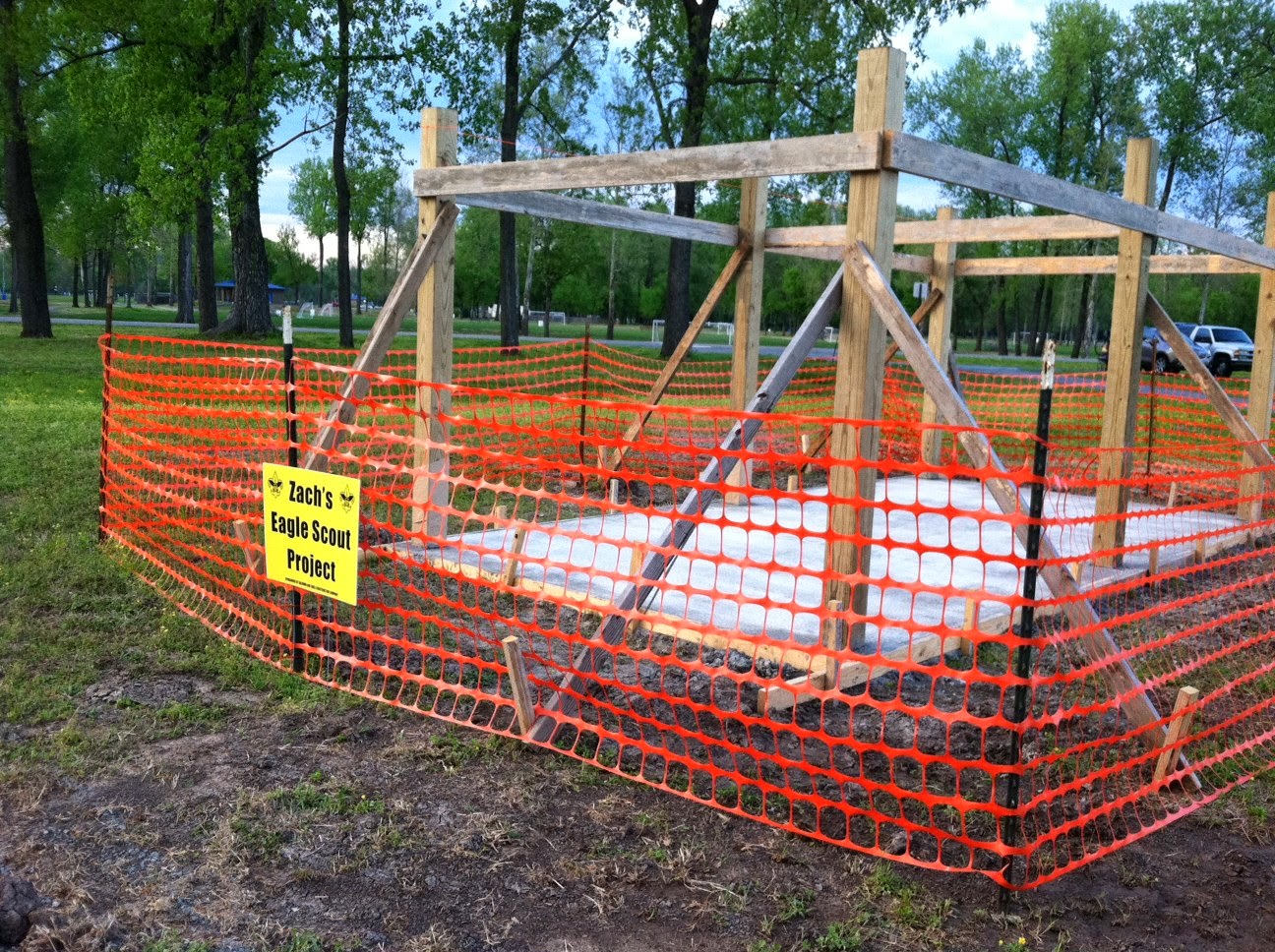 One of the pavilions will be dedicated to Wounded Warriors and the other will be dedicated to Native American tribes.
I passed by on my way to ride out west last Saturday and found that the crew had been hard at work. I also saw a pair of eagles over the same stretch of trail. Eagle sightings are not as rare as they were in the bad old days when they were seriously threatened as a species, but it still thrills me to see the big birds on the wing over our city.
Shop Talk: Women's Bike Clinic 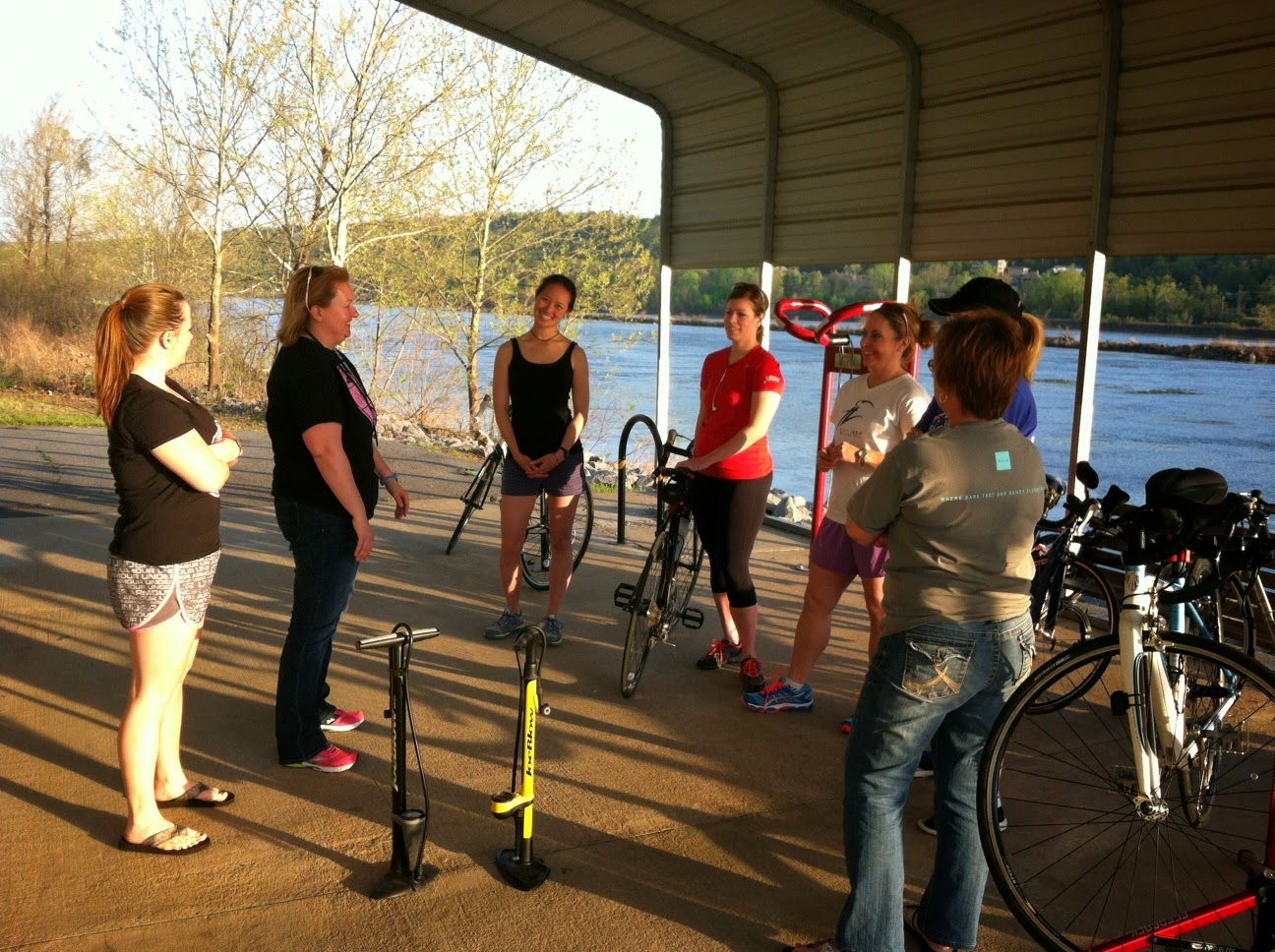 Willa Williams of NLR's Fit2Live conducting a workshop.
Also on last Saturday, I came across a workshop being conducted by Willa Williams. A group of women were learning how to fix a flat tire, shifting strategies, and other mechanical basics about the bike. I'm always tempting to refer to the events as "Wenches With Wrenches" but I have been told that it is insensitive and possibly offensive, so I refrain.

It has been widely reported that a runner was attacked by a couple of German shepherds while using the path along Pinnacle Valley Road, just south of Maumelle Park. Apparently the dogs charged the runner, who landed a few punches, stumbled into the ditch, and subsequently escaped without injury when passers-by caused the dogs to retreat back to their yard. Pulaski County deputies were called and were to contact the dog owner.
Riders should always beware of dogs, though few dogs will actually attack. Most are either encouraging bikes to leave their territory of simply enjoying the fun of the chase. That said, they can still cause crashes and injury.


Be alert, be polite, stay right

This weekend is shaping up as prime for crowds along the River Trail.  Keep in mind that many of the folks that we encounter on the trail may be clueless, so regular trail users need to take responsibility. We have plenty of trail miles and unlimited open roads around town, so consider those crowded stretches around the bridges and in Two Rivers Park as your routes to freedom. Take it slow and enjoy the smiling faces of the unsupervised children darting into your path.