Broadway Bridge Bids Delayed
Bids for the new Broadway Bridge linking Little Rock and North Little Rock are now set to be taken in July. The reason for the delay was said to be that it will allow potential bidders more time to sturdy the project and possibly produce cost and/or construction time reducing ideas. After much public discussion and pressure from the cycling community regarding the design of the replacement of the aging structure, the AHTD put its massive foot down last year and said that the project must proceed in 2013 or federal funding to the tune of tens of millions of dollars could be lost. That's right, 2013.

From a THV11 article from April 2012 discussing an alternate plan:


On Tuesday afternoon, THV received a copy of a letter from the Transportation Department to Mayor Stodola and Mayor Hays.
The letter stated it is not possible to plan a Chester Street Bridge in the time allotted, considering the federal funds must be used in 2013.
From a Highway Department website updated December 16, 2013:
Construction is scheduled to begin in late 2013 or early 2014 and will be expedited to reduce the amount of time the bridge will be out of service. The total cost for the bridge includes removal and demolition of the current bridge and construction of the new bridge along with its additional improvements in the vicinity.
The same loss-of-funding argument was put forth when discussions arose in 2013 concerning the minimalist bike and pedestrian accommodations included in the current design. I may be cynical, but it appears to me that the risk to funding may have been put forth to quash continued discussion, while the reality is that the timelines were not quite so hard and fast. Regardless, the discussion is over and now it appears that construction is unlikely to begin until early 2015.
Traffic Nightmare Predicted
When construction ultimately closes the current Broadway Bridge 18-20,000 cars per day will have to be rerouted to the I-30 and Main Street Bridges. That in itself will result in, to use technical language, one hell of a big mess. The effect of any fender bender on either of those bridges will likely be amplified into total gridlock on both sides of the river. Heaven forbid that an errant barge should strike I-30, as has happened twice in the last year. I predict madness will ensue. 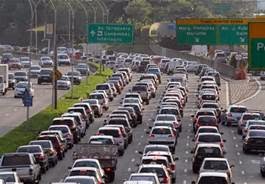 Traffic along the River Trail near the bridge site will be affected long before actual closure of the bridge, as the contractor will require space along the river for the staging of equipment and materials.
Shillcut Bayou Bridge
The replacement of the tooth-rattling Shillcut Bridge at the east end of Burns Park near the boat launch ramp is finally going to happen. Known to most River Trail users as simply "the wooden bridge", the existing bridge was built over a waste water force main and will remain in place. The new bridge will be longer and will effectively cut off some of the curve in the trail formed by the approaches to the current bridge.
According to Mike Smith of the city's Engineering Office, the contract has been awarded to Seagraves Construction. A preconstruction meeting will take place on February 5, and Smith expected construction to begin in 30-60 days, depending on the lead time for materials.
Earlier discussions about this project indicated that trail disruptions during construction will be minimal.

While not yet "closing the loop", the Little Rock City Board of Directors voted to approve construction of projects to cross the UP tracks east of Dillard's HQ on Cantrell Road and to cross the Little Rock Marine property to the west.  Details can be found on the Metroplan Arkansas River Trail website here.

Follow-up note: I'm admittedly a little confused about the status of these projects. It was reported that the board approved going forward with these projects, but in today's Dem-Gaz there was a report that they are preparing to vote to authorize negotions for the required rights-of-way. All reports indicate progress, but the convolutions of the process have left me a little puzzled.

Thanks for the updates Jbar