I'll apologize for the scarcity of postings here at JBarCycling but the local scene has been slowed by the incursion of winter weather while my work and play schedule has included quite a few days of travel. The upside is that our most recent excursion was a business incentive trip to Playa del Carmen near Cancun, Mexico, that involved sunshine, heat, a beach, and the observation of a vibrant bike culture.
I always make it a point to check out the bike scene when we travel. Mexico is a relatively poor country so it was not surprising to find that bicycles there are primarily valued for their utility rather than for sport, recreation or exercise. In fact, we saw only one sport rider in full kit and aero helmet, flying along the shoulder of a major highway on a tri bike. 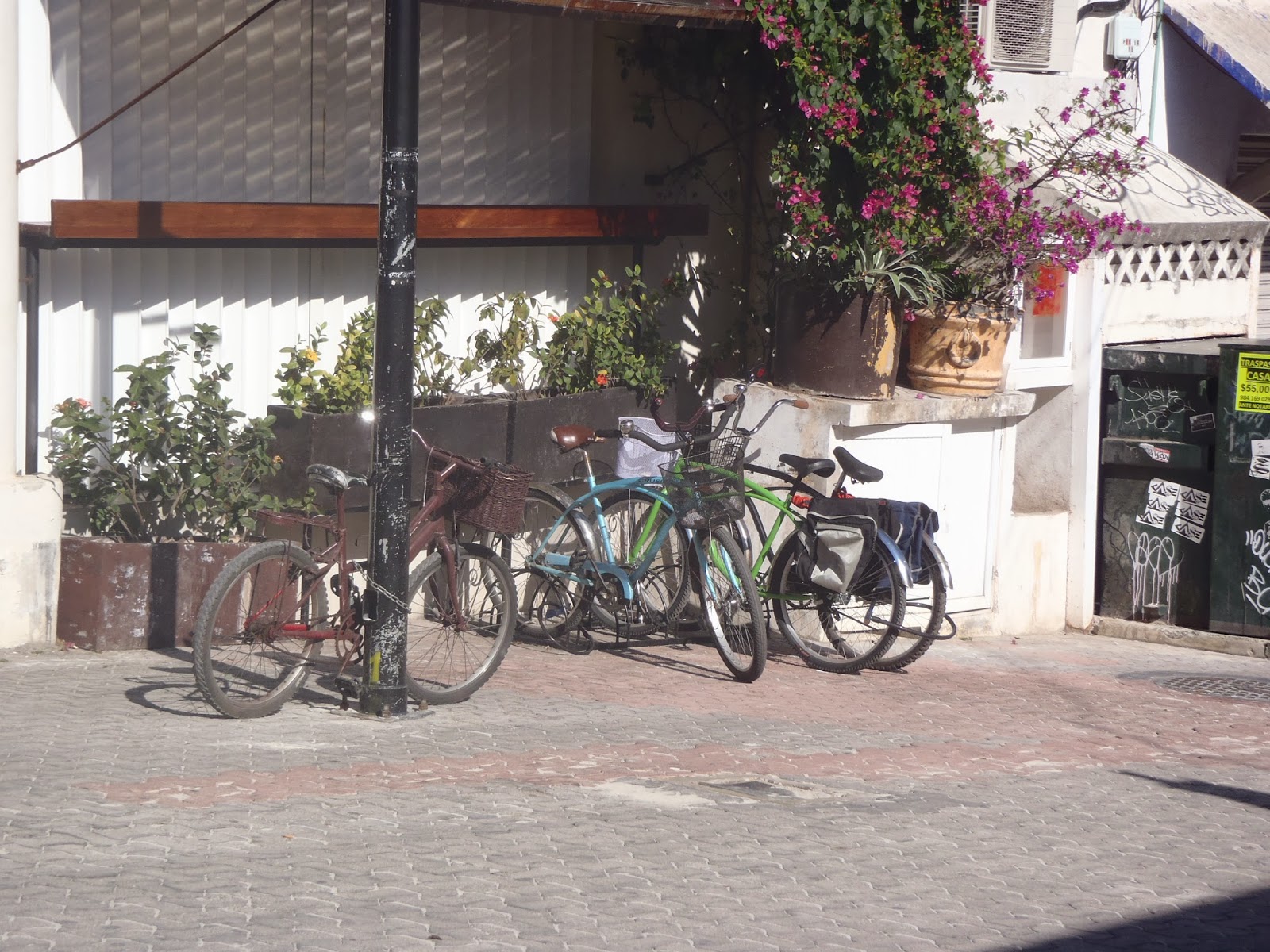 This is a pretty representative selection of Playa bikes. Utilitarian and often colorful.
The coastal areas of the Yucatan peninsula are flat and the roads are for the most part yardstick straight, making for easy cycling. Add that factor to the fact to the economics of the area and the result is that bikes are practical transportation for both personal use and for commerce. 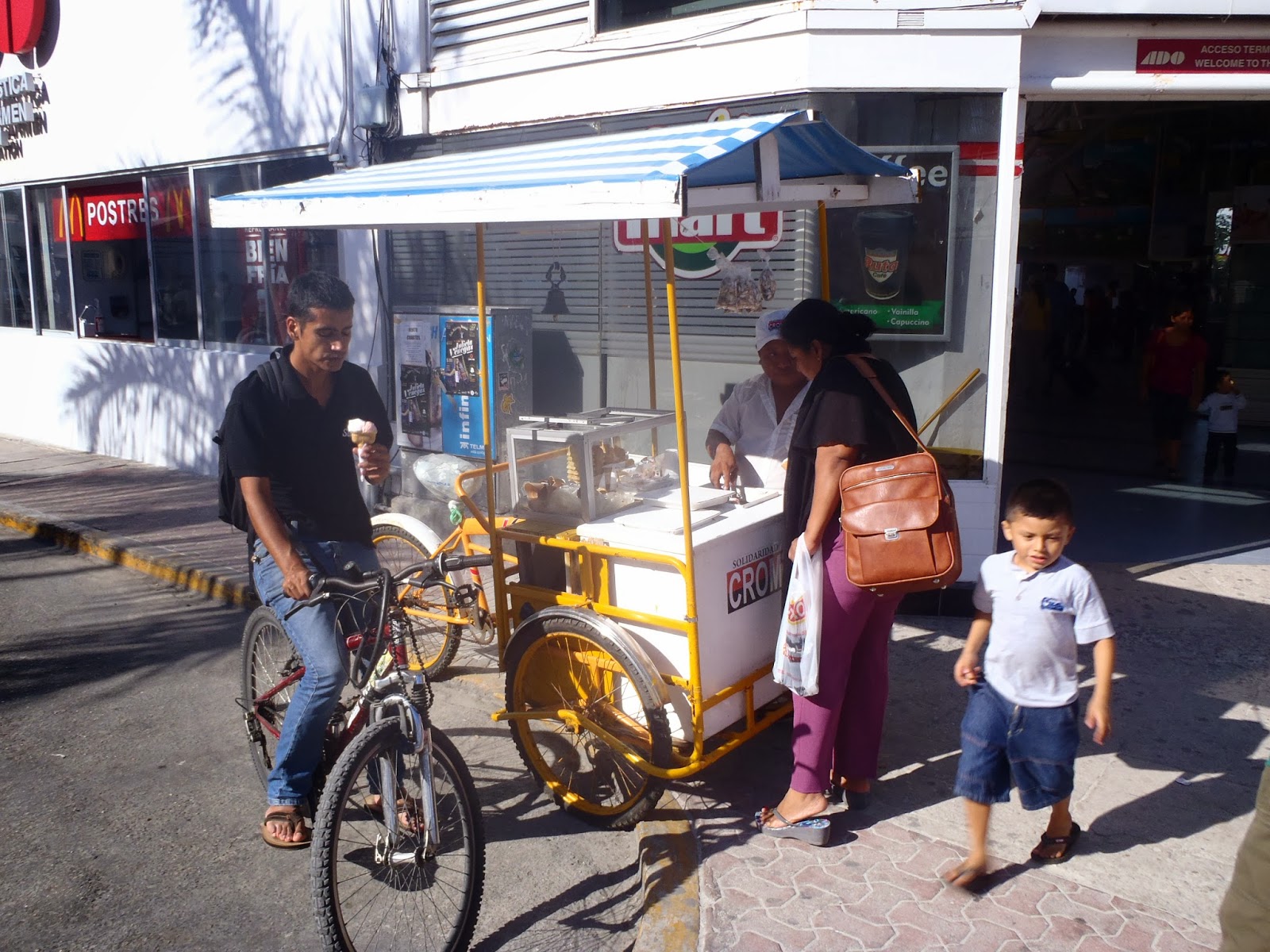 Both the vendor and the customer in this photo relied on pedal power. 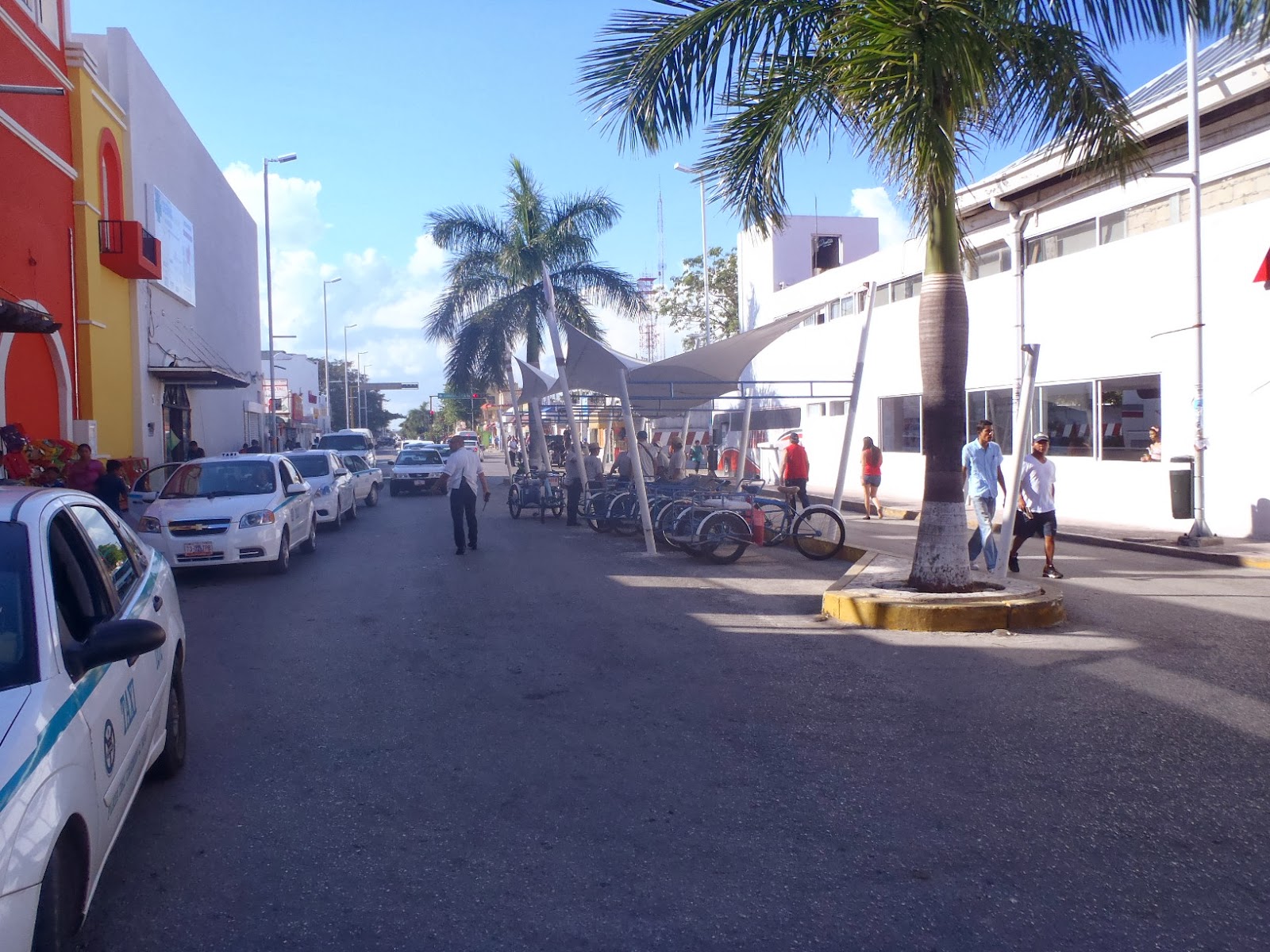 Pedicabs lined up in the taxi zone in the shopping district.
While traveling along the highways we saw many cyclists on the shoulders of the roads, sharing the space with motorcycles. There were also a surprising number of dedicated bike/pedestrian paths, at least near the resort area. Our guide on a trip to the Mayan ruins at  Chichen Itza told us that cheap motorcycles imported from China were replacing bicycles at a rapid rate. It was not unusual for riders to be transporting their wife and a child or two by motorcycles. Jorge informed us that the result of the combination of overloading and inexperienced riders was often tragic. 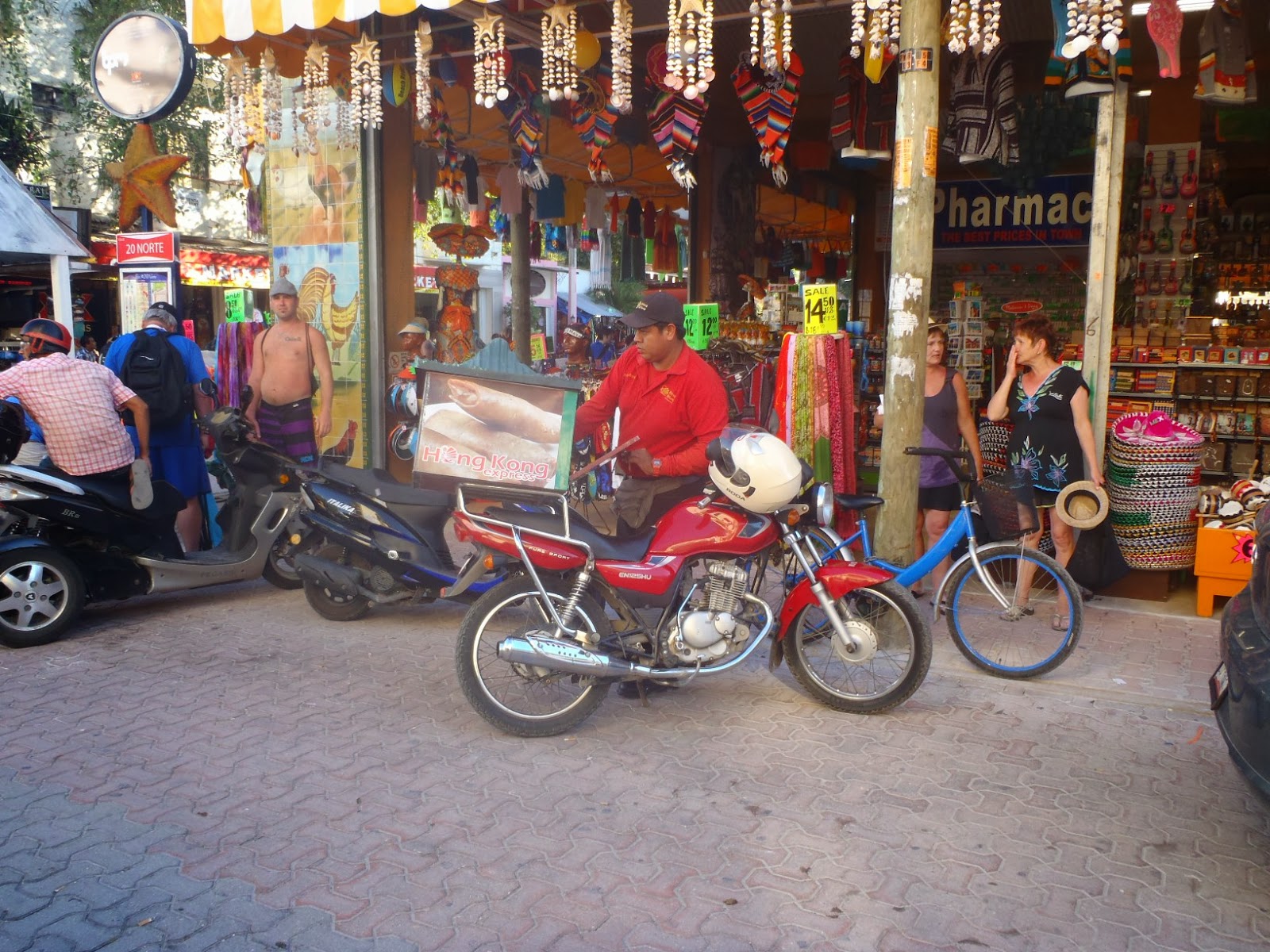 Cheap imported motorcycles and scooters from China are making rapid inroads into the two-wheeled culture of Mexico. 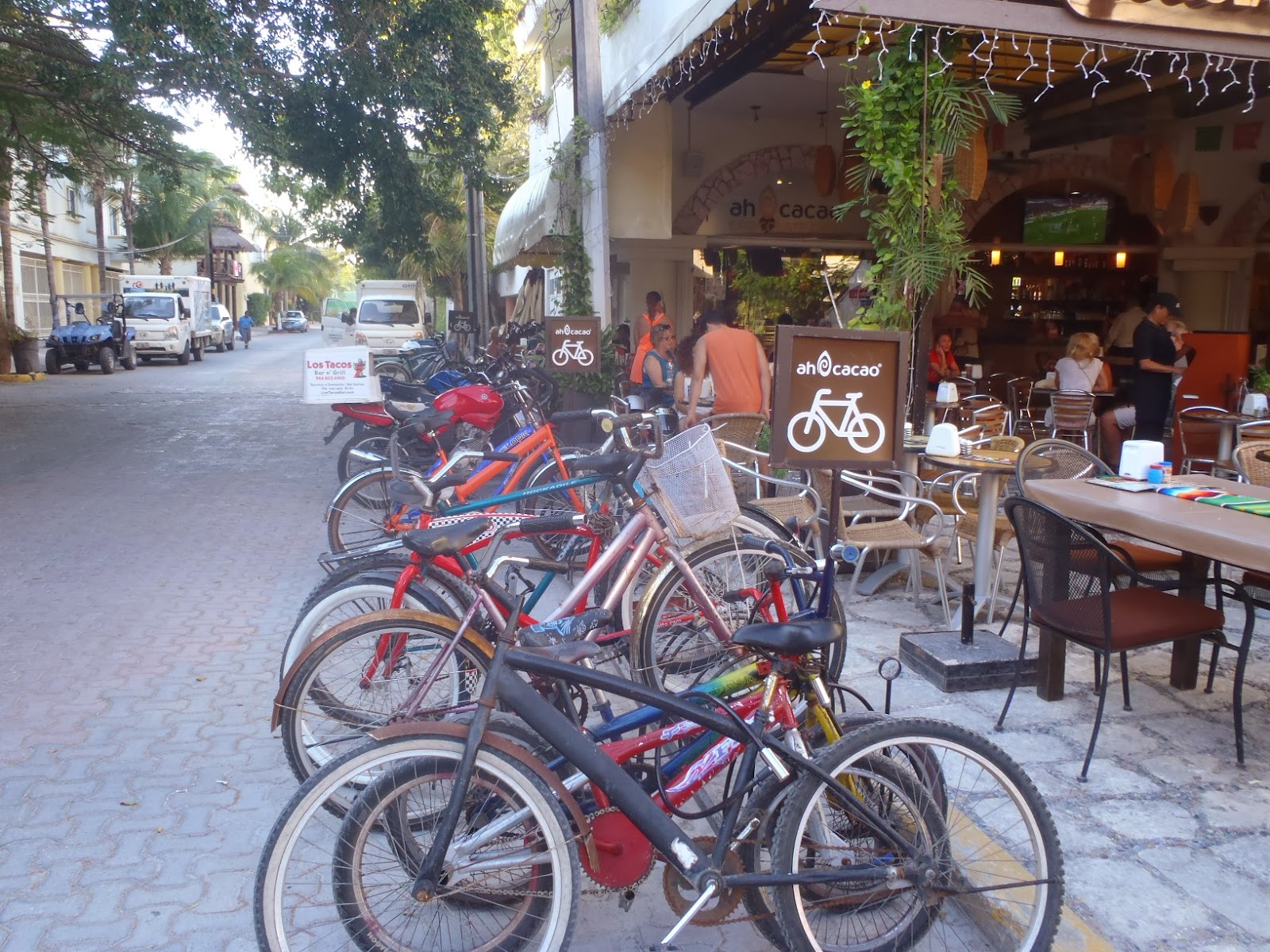 The parking area for the cafe reminded me of similar scenes common in many small towns of Colorado. 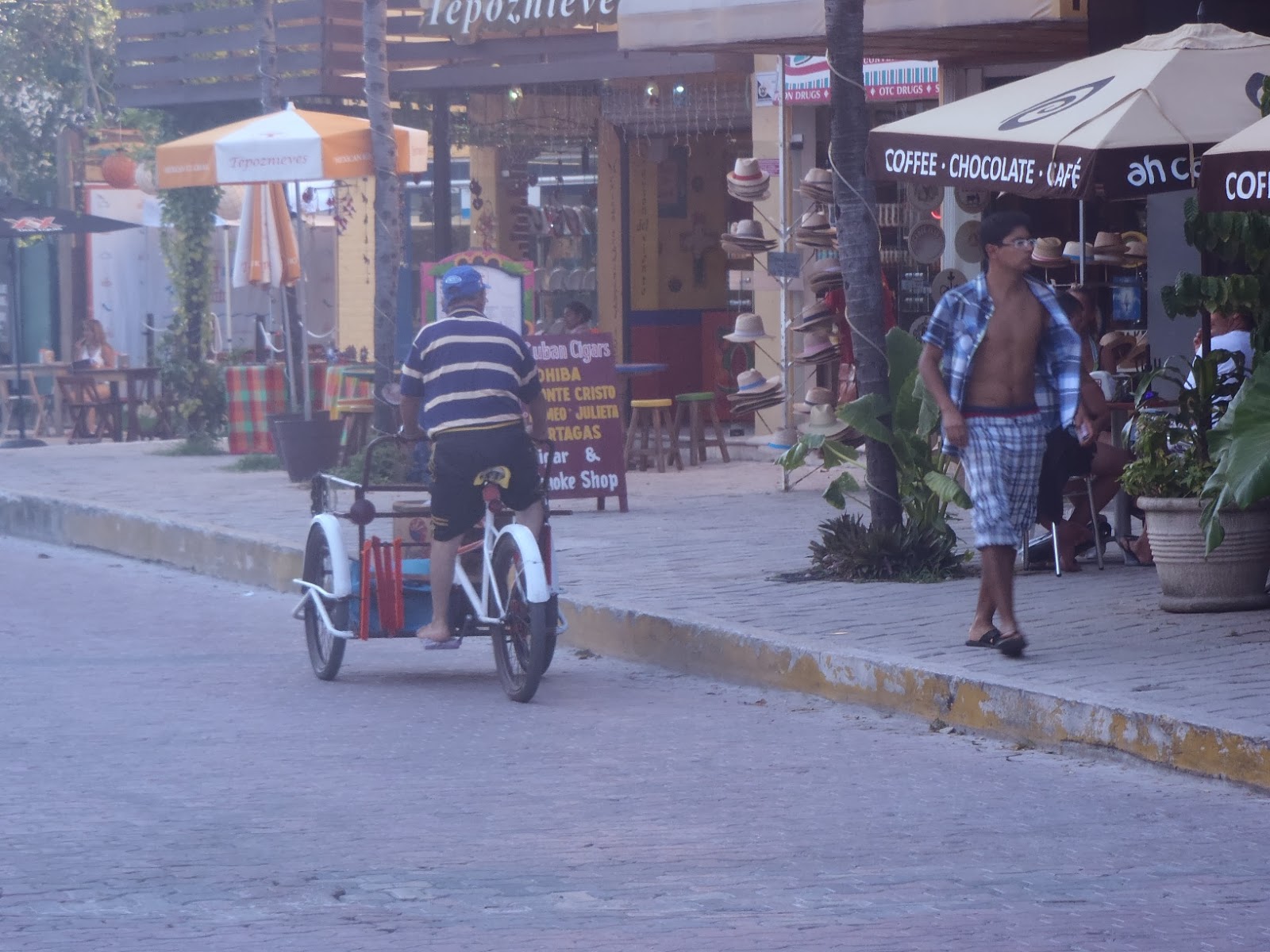 We saw these 3-wheeled utility bikes hauling everything from lumber to concrete to grandmothers. The appeal of a motor to working people is understandable, but out of reach for many. 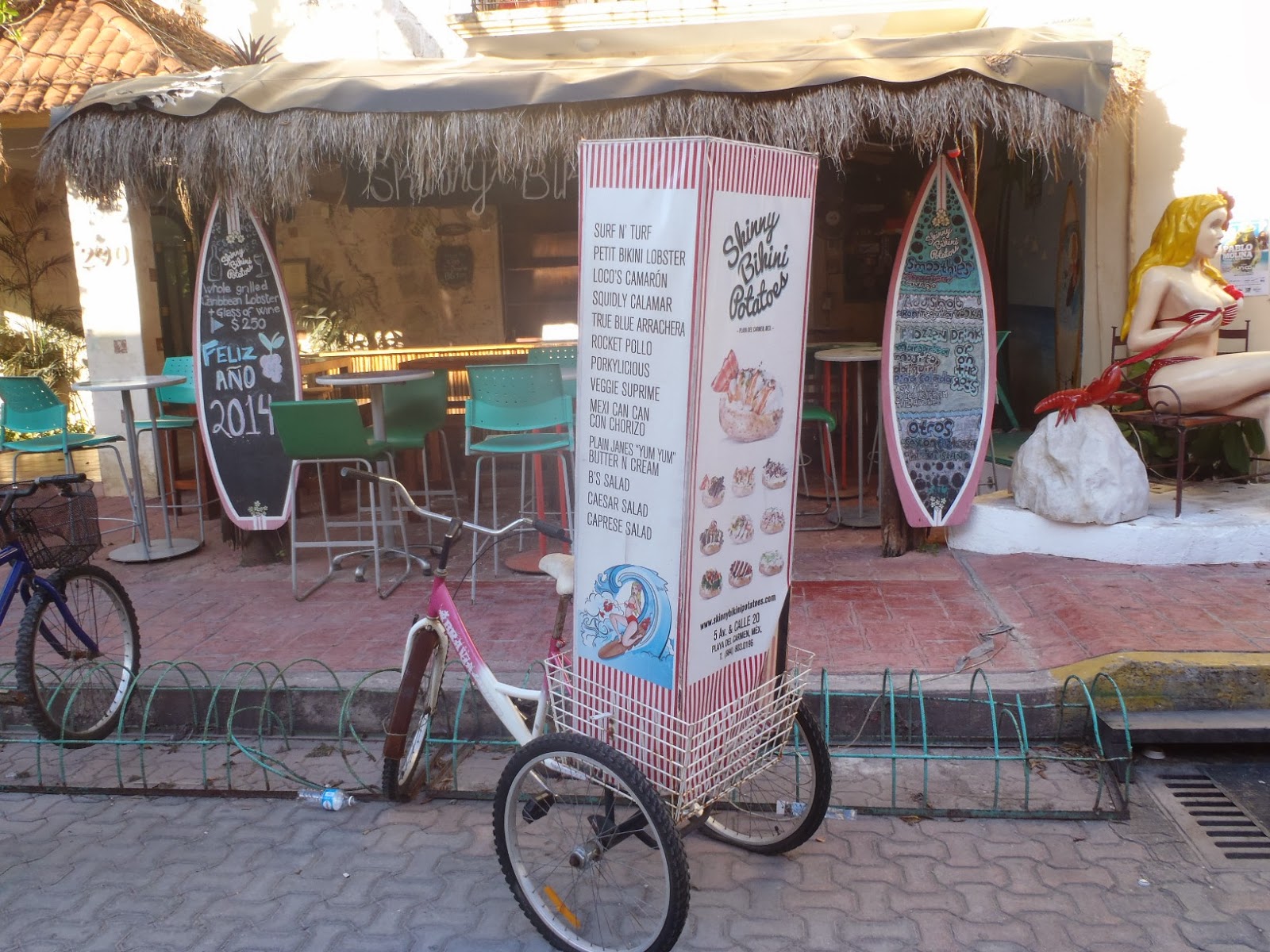 Skinny Bikini: Marketing is everything in tourist towns. 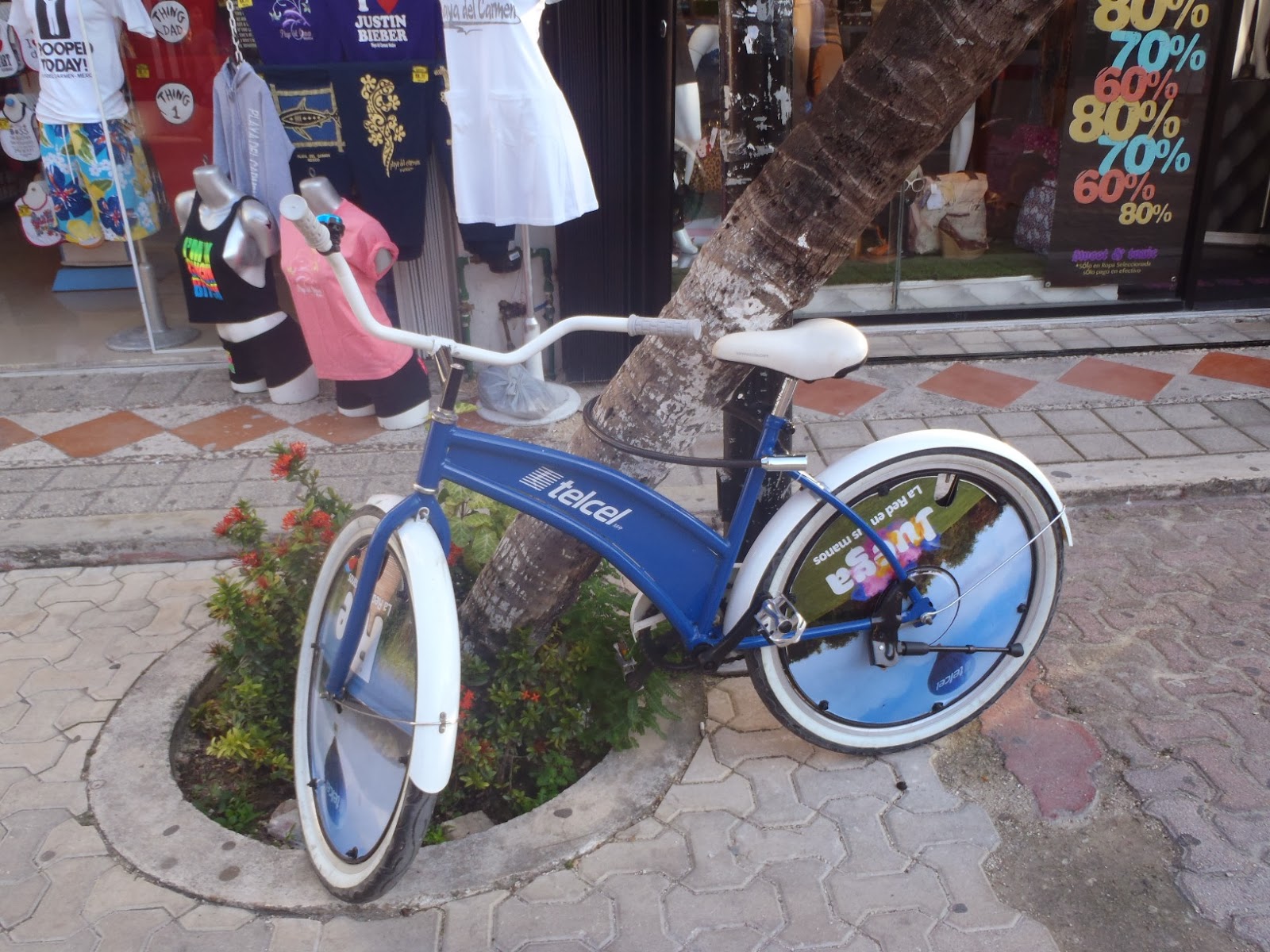 This bike would have been at home on the bike polo court. 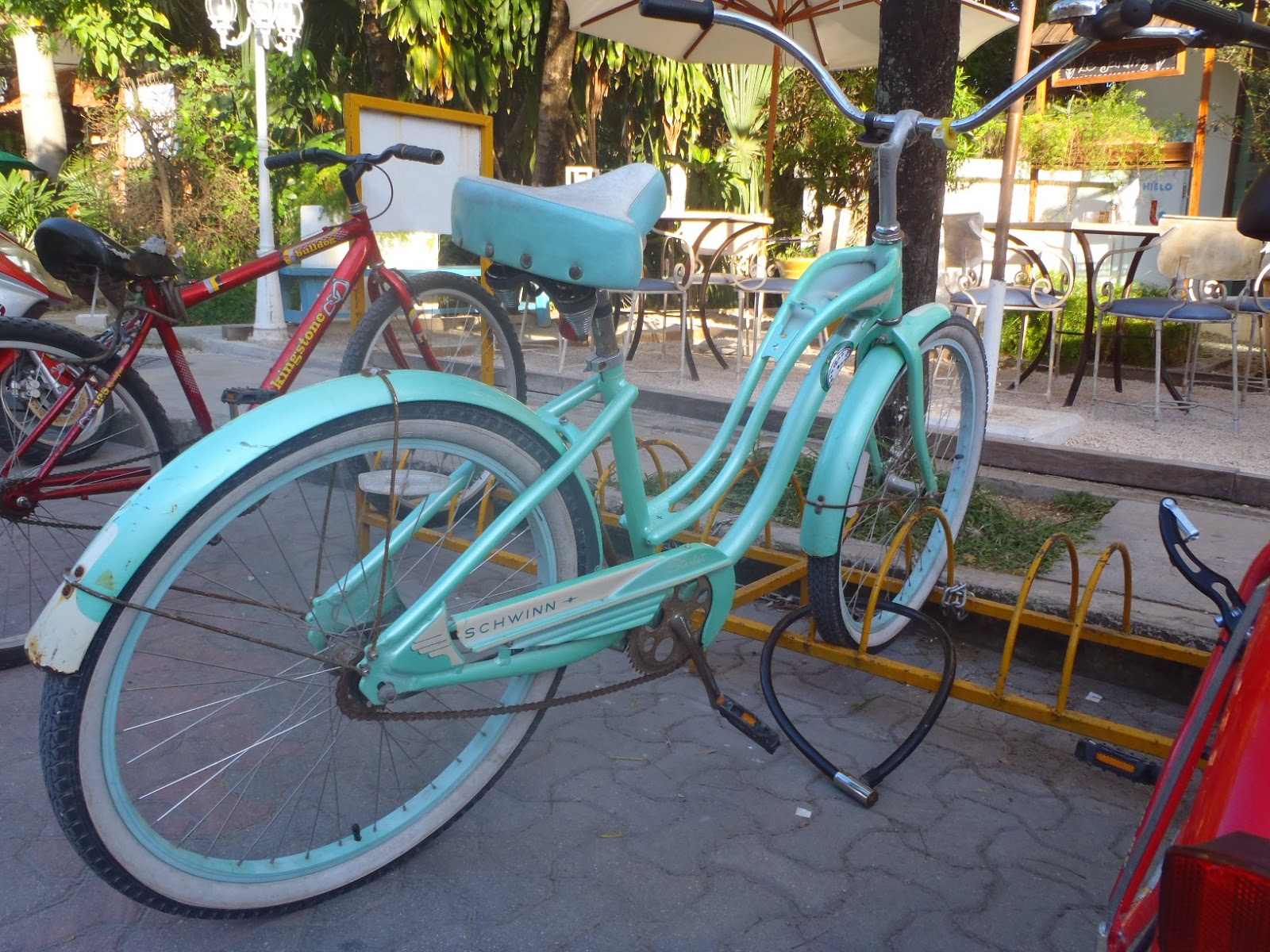 Most of the bikes we saw were unfamilar brands, probably from mass marketers, so this Schwinn stood out.
Most of us here on the good ol' U.S. of A. are fortunate enough to be able to use bikes primarily for recreation, competition or as an alternative transportaion. Visits to places like Mexico and even small-town Colorado remind us that bikes remain viable as a primary means of transport for many people in the world.
Posted by JBar at 9:18 AM

I live in the Merida, MX (Yucatan) during the winter. This winter we made an excursion to Cozumel for a week. Cozumel now hosts and Iron Man Triathlon, and as a consequence, they recently dedicated the coastal road to cycling year round. The road is 48 km long, and only a small portion of it is shared with cars, but even that section has a wide shoulder and sparse traffic. The route takes you along beautiful white sandy beaches and turquoise water. Next year, I am taking my bike with me when I go. I can't think of a better place to ride through the winter.