Between cold weather and some travel, both ride time and writing time have suffered here at the JBar Bunker, but, as usual, the world has not been standing still.

Cross Training
Since this is a cycling blog, that's what I'm calling a recent ski trip, anyway. Yep, I'm training at altitude, just like the big boys.
Diane and I once again joined the Little Rock Athletic Club for a few days on the slopes at Crested Butte, Colorado. As a skier, I would compare myself before this trip to a rider who is not confident enough to ride in a group and who might well feel compelled to stop and put a foot down before daring to open a gel or take a drink. It has been damned frustrating for me, but for some reason the switch was miraculously flipped and  I now claim the elevated status of being a mediocre skier! I'm quite pleased, as it had gotten a little old having Diane waiting for me at the bottom of each run and strangers blowing by me shouting, "Just relax, man". 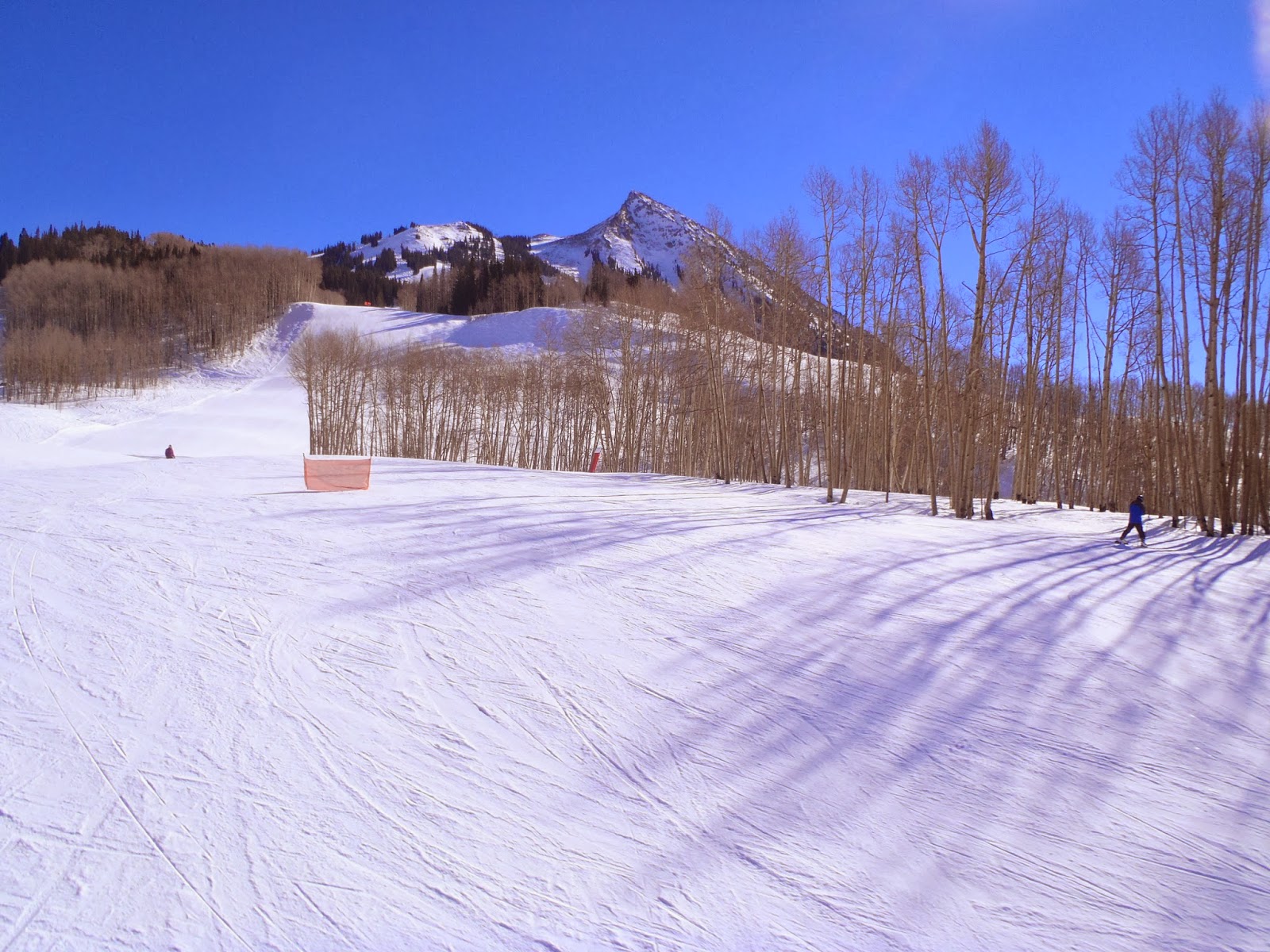 Damn those holiday crowds. Blue skies, cold weather, daily grooming, and a good base made for perfect conditions.

Powder hounds might have been disappointed by the lack of new snowfall, but Colorado has enjoyed a lot of early season snow and conditions were perfect. Though we heard a couple of locals complain about crowds, I can only guess that they are spoiled, as we usually skied directly to the lifts. It was rare to find lines more than 3 deep. 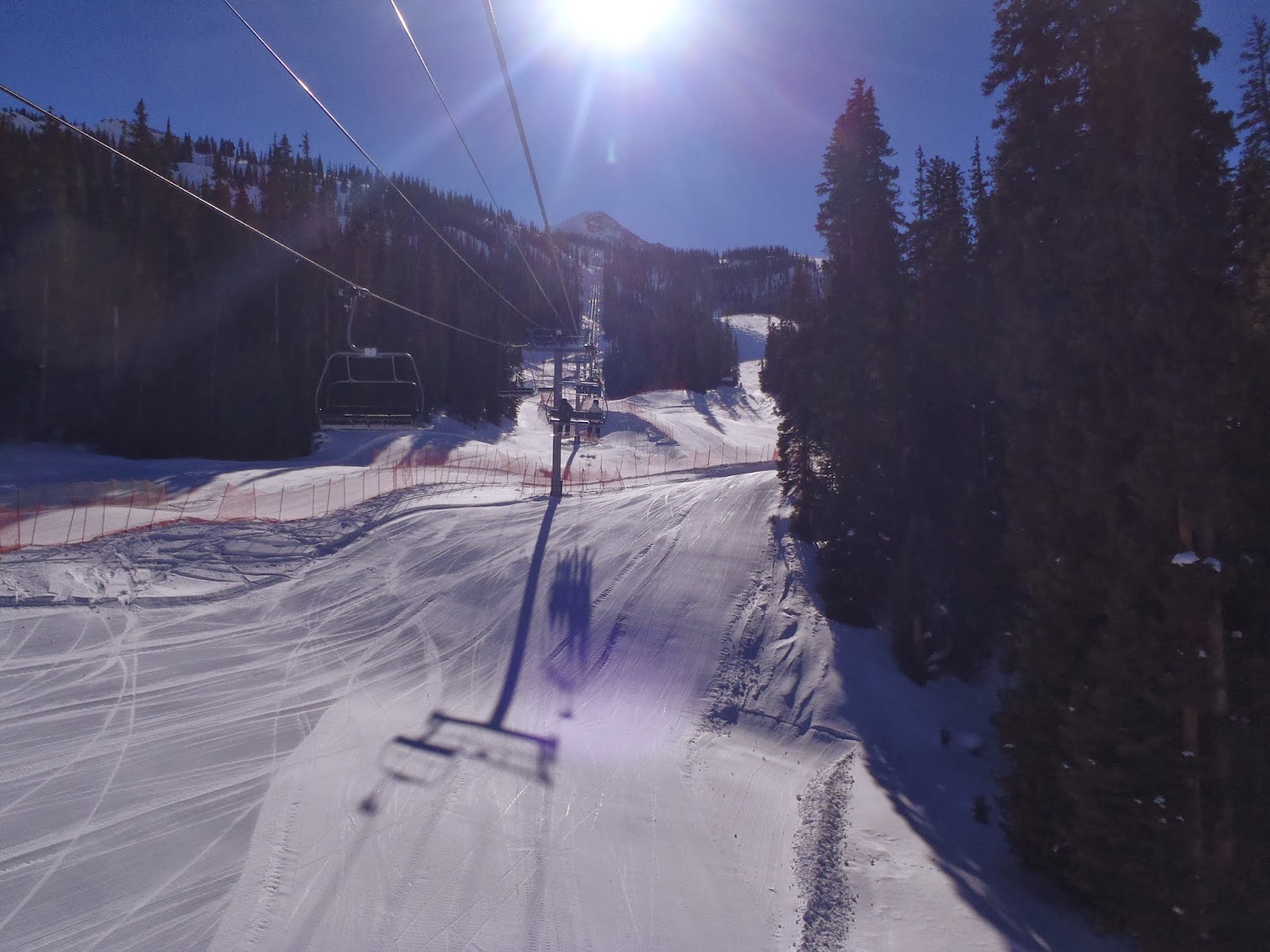 Most mornings started out with temperatures well below zero, but warmed to around 30. Sunshine and good gear make that comfortable skiing. 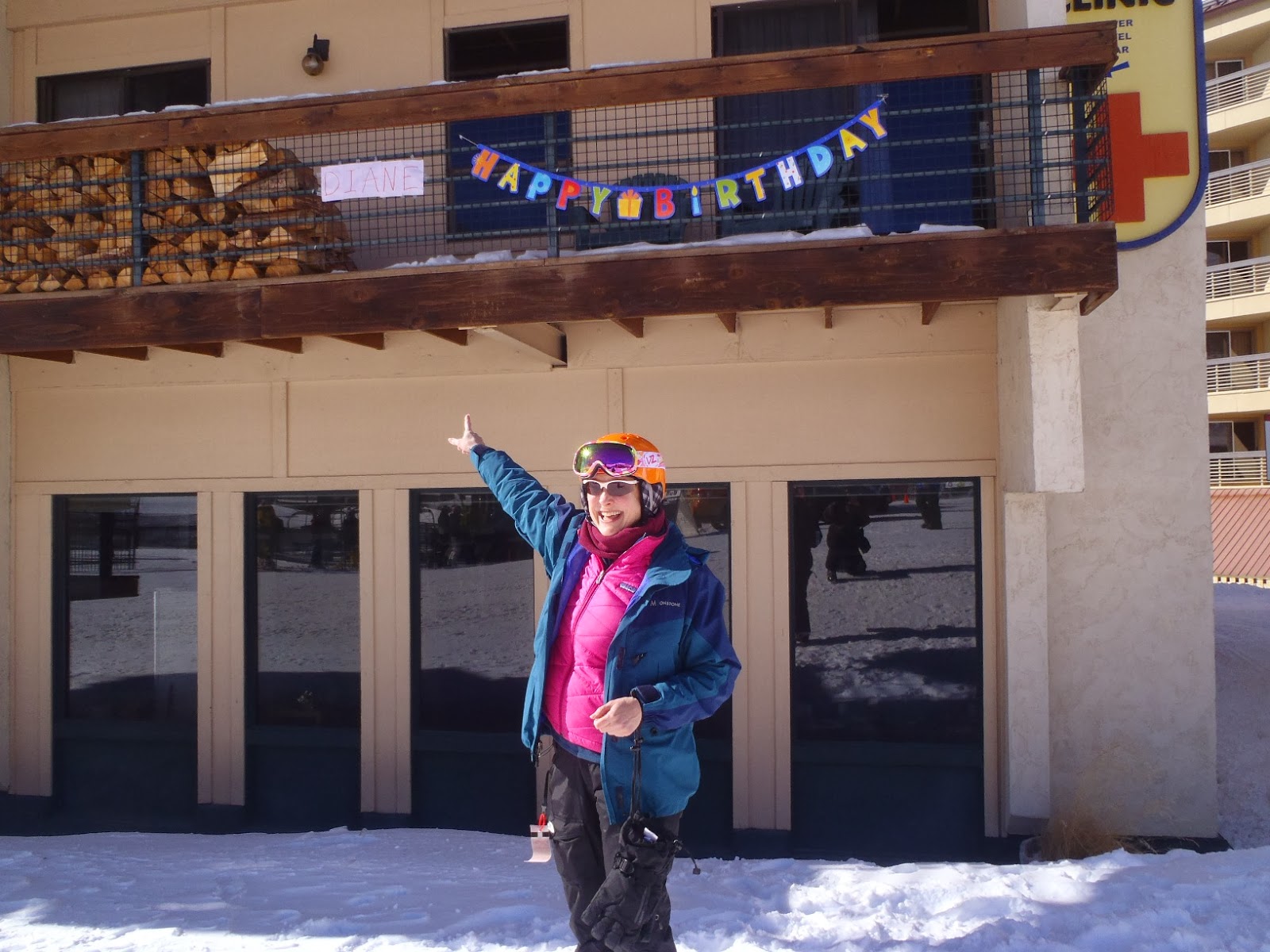 Diane celebrated her 50th birthday, an event that was noted by this banner at the ski area base, compliments of Rhonda and Jack Lessenberry.

The Town
Crested Butte is a small mountain town and bears little resemblance to resort towns like Vail or Beaver Creek. The elevation is high at around 9000 feet and the population is low at about 1500. Nearby Gunnison offers an airport with direct flights from major hubs and additional amenities. CB was a coal mining town when founded in the late 1800's and the downtown area is made up of mostly Victorian era buildings.
We were repeatedly told by locals that summer is the best time to visit, a slightly surprising position for a ski town, but Crested Butte is likely as well known for its cycling, hiking and self-proclaimed status as Colorado's wildflower capital as it is for skiing. 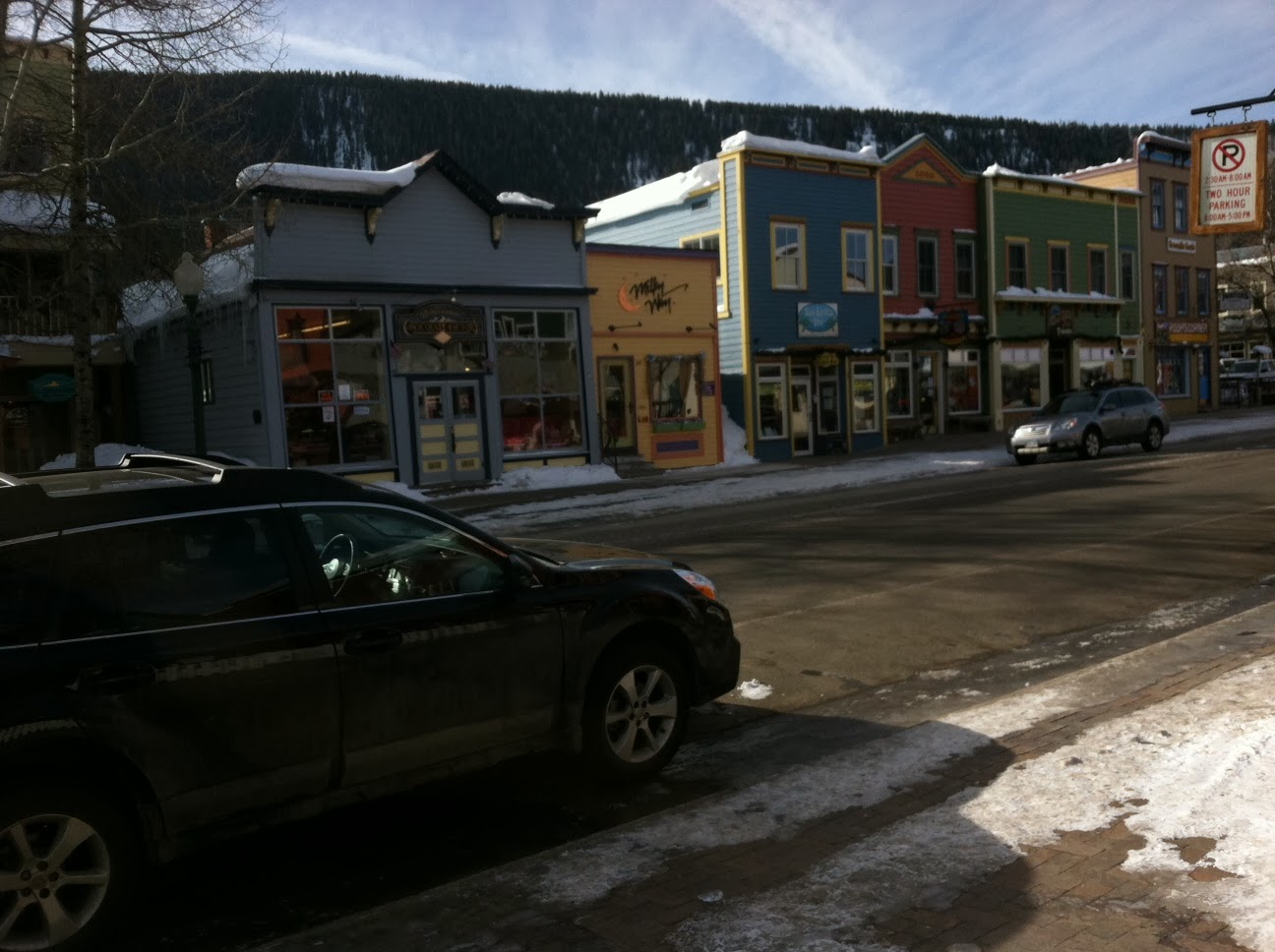 Crested Butte has character in spades. The small downtown is rich with good restaurants and funky bars where visitors and locals can enjoy great food and local craft beers at very reasonable prices.

The Bikes
We spend our summer vacations in the Salida area, a couple of hours away over Monarch Pass, and are always impressed by the fact that almost every resident has some kind of a townie or cruiser for local transportation. Crested Butte is no different. Though many of the streets and sidewalks had a layer of ice, there were still a lot of folks getting around by bike. I asked one rider about the danger of riding in icy conditions and he just said, "slow and easy". Fat tires don't hurt, either. Local buses provide easy transportation to the ski area 2 miles away from several stops in town, running every 15 minutes, and it was not unusual to see bikes simply leaned against a snow drift near the bus stops. Few locks were seen. 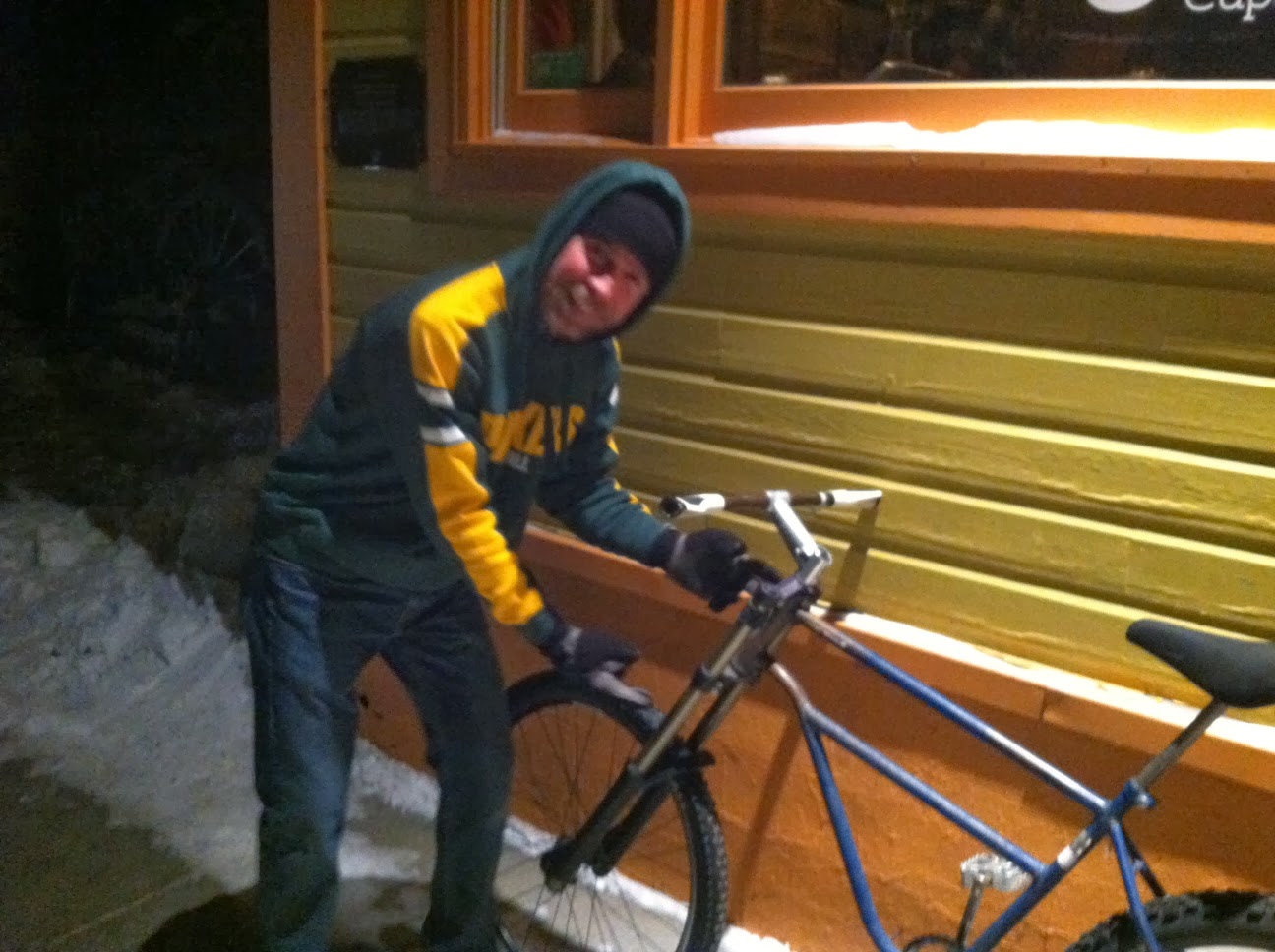 Richard Machycek of Arkansas Cycling and Fitness, knows his bikes. He gleefully identified the "donor bikes" of various components of this pieced together "Frankenbike". 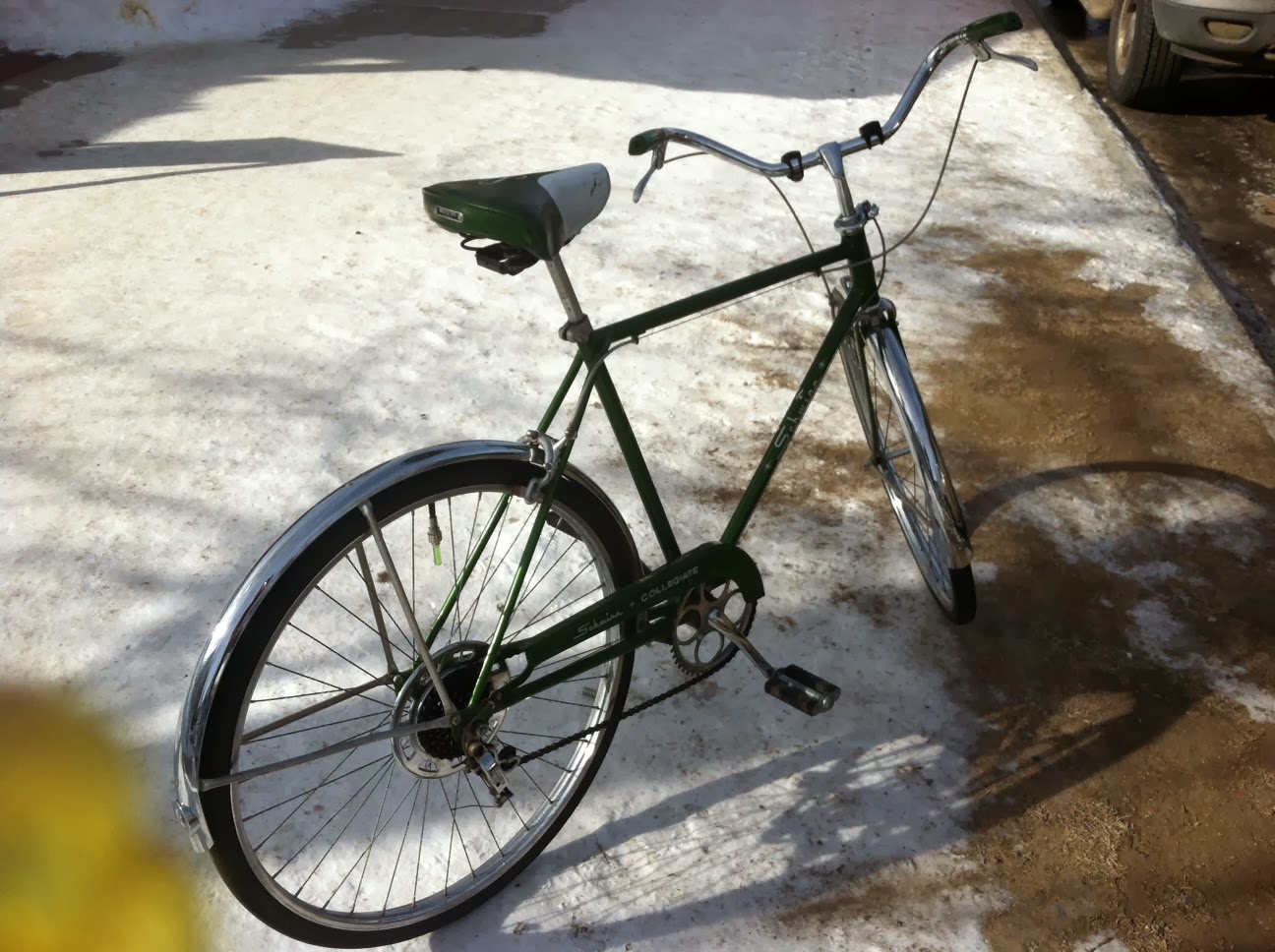 This pristine Schwinn Collegiate is a beauty from a period when Schwinn still meant American-made quality. 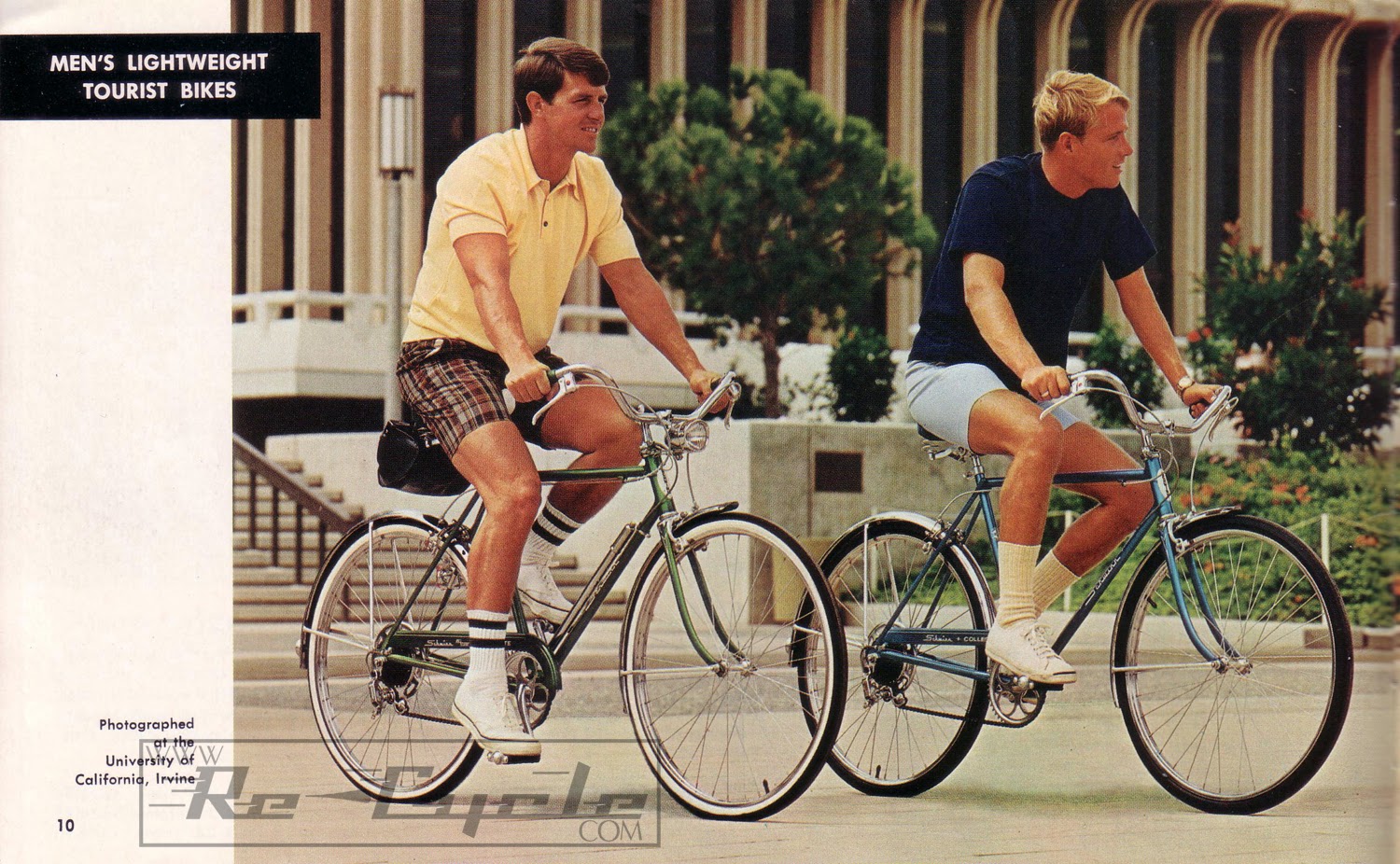 I just had to throw in this page from the 1968 Schwinn catalog. By the 70's, imports were taking over the high end of the bike market. Trek was formed in 1975 and slowly placed itself in the top tier of American built bikes. 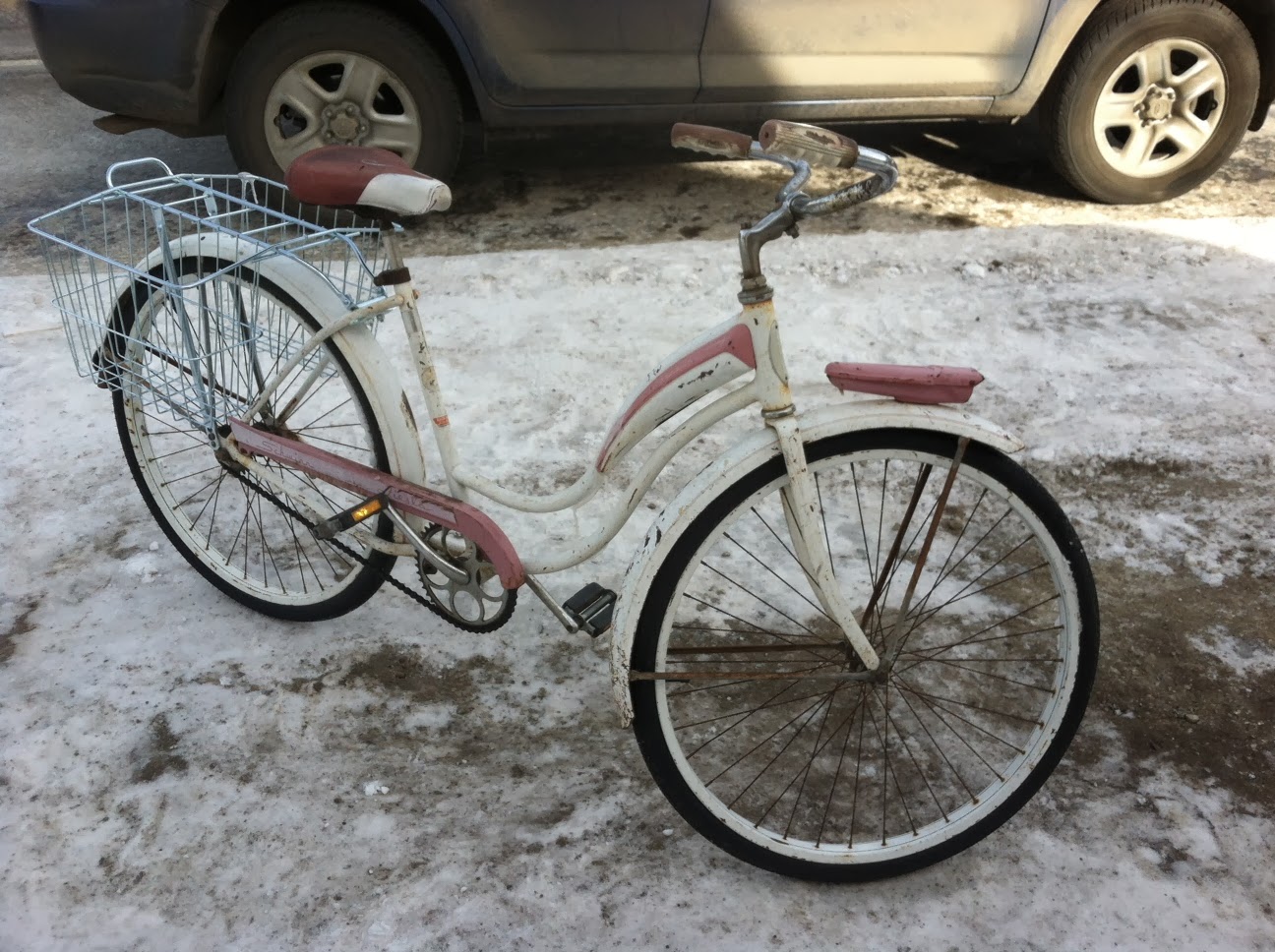 And you thought women-specific bikes were a new thing! This pink color scheme and step-through frame screams "girl bike". 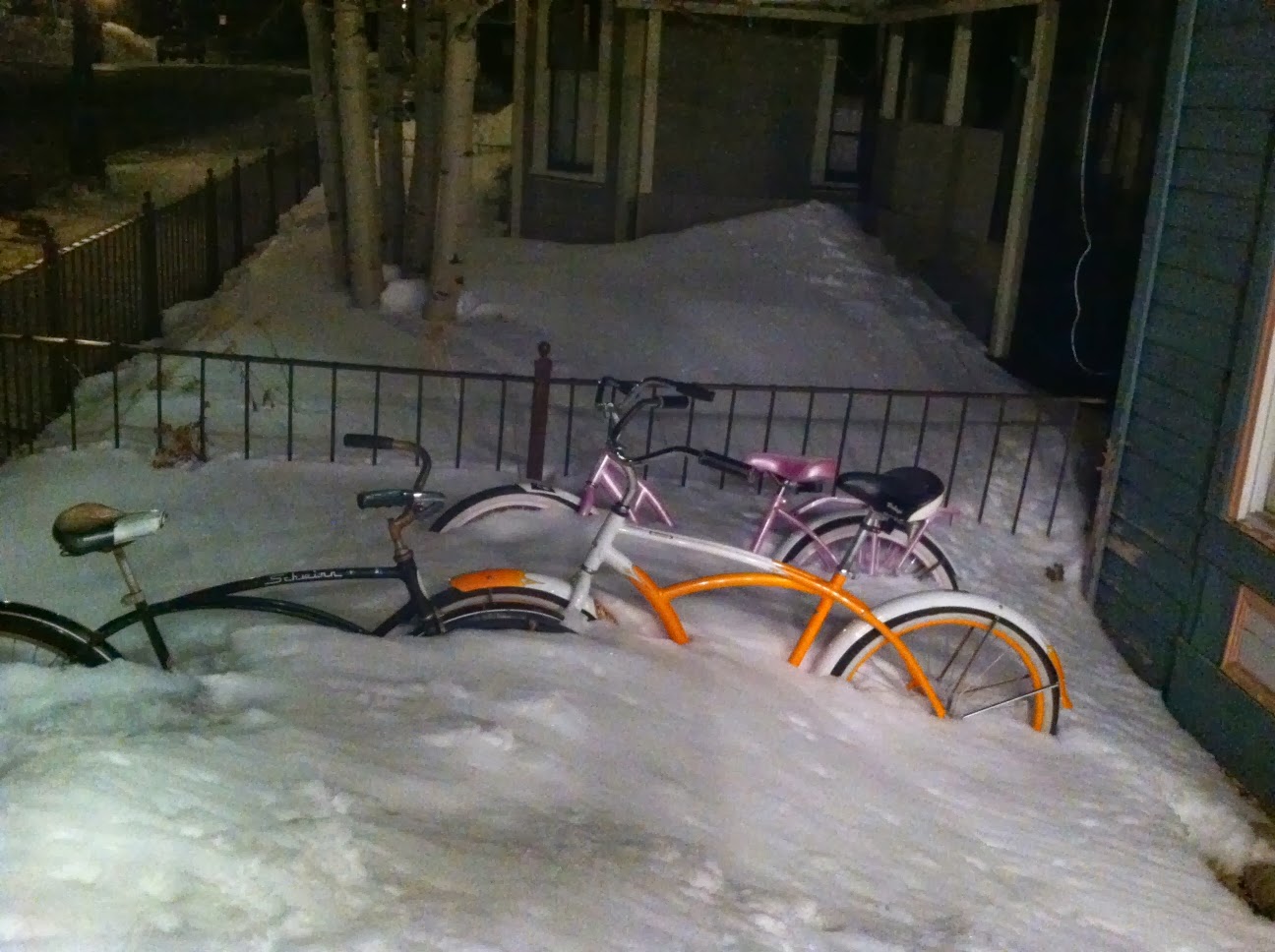 Not everyone rides through the winter. I felt a little sorry for this trio.

I love the Colorado bike culture, which embraces everything from Tour level road riding and world class mountain biking to the fat-tired townies favored for local transportation. In the Colorado Rockies, most towns were compactly built along rivers and railroad grades so that even in the heart of the mountains, flat terrain dominates, making a trip to the local beer joint or grocery store an easy cruise on fat tires and platform pedals. One thing that I always wonder about is, where did all of these cool old bikes come from? You see a few new Electras and other townies, but the scene is dominated by classic American two-wheelers.

What about us?
Our urban structure here in central Arkansas is very different that that of small-town Colorado. Urban sprawl is unimpeded by geography and the mindset for  generations has been that transportation means cars. Roads are built for moving as many cars as possible as fast as possible, with little thought given to walking or cycling for even the shortest trips in our neighborhoods.
Older neighborhoods, with their sidewalks and narrow streets, seem to have a head start on livability. Hillcrest in Little Rock is a good example of what a neighborhood can be, with shopping and dining opportunities within riding or walking distance for most residents. Our own Park Hill area in North Little Rock has got great potential but lacks the kind of amenities that a community can grow around. Grocery stores require a trip of several miles to more suburban locales and a recently overturned ban on the sale of alcohol had made the area unattractive to anything except a few fast-food restaurants.
Fortunately, communities are coming together and demanding a different view on development. We need only to look to the South Main project in Little Rock to see a neighborhood on the rebound as new residents see the value nearby dining and shopping, along with restored opportunities for walking and cycling for transportation. These folks could be called urban pioneers as they help redevelop a deteriorated area and bring along new ideas about traditional neighborhoods where people actually lived near the places at which they shop and dine. Pretty revolutionary, these old concepts of convenience.

Another great LRAC Ski trip with some really great folks at one of the coolest places in Colorado!

escort torino : Thanks for taking the time to read the blog.. Please check back for new article..
All feedback re Bangkok Escorts is appreciated

It’s a amazing post for high profile, sexy and beautiful VIP Escrots with very affordable rates. If you are looking for VIP Escorts in Delhi then you can visit our website here Independent Delhi Escorts.