Some time ago I issued a standing offer to my friend Matt Milner to guide him around the River Trail loop. Matt lives in Heber Springs, where he is a fishing guide, and had ridden the trail but had not figured out the Dillard's-to-downtown puzzle. He took me on one of his local rides around Heber a few months ago so I was reciprocating and I always enjoy riding the trail with out-of-towners. I will admit that our timing could have been better, as it was still damn cold and we found that all of the bridges along the trail were ice covered. The upside was that it was sunny and warmer than it had been in several days and I was suffering from the dreaded cabin fever.

When Matt texted me on Wednesday that he had arrived, I grabbed a Clif bar for lunch and headed down to meet him at Fike's Bikes. Trail conditions were good enough until we got to the Shillcut Bayou bridge in Burns Park, where we ran into Diane, aka Mrs. JBar, and made our first dismount to cross the ice covered bridge. When we got to the BDB and saw that it was covered with ice, Diane showed her wisdom and finished her ride back to her nearby office as Matt and I headed up the narrow sliver of clear bridge deck. 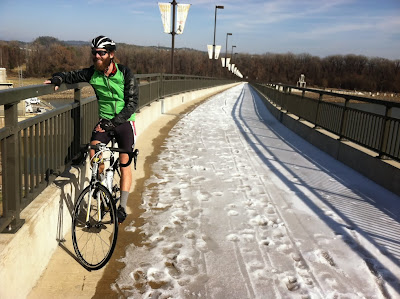 Matt spends most of his days wading or rowing trout streams. I guess it toughens him up for riding in his shorts on snow days.
The section shown above was as good as it got on the BDB. We had to dismount a couple of times on the BDB, on the Cantrell Road viaduct near Cross Street, and on the Clinton Park Bridge. A road bike is not the ideal craft for navigating icy streets, but we fulfilled our mission without mishap. I headed back to work and Matt rolled on to pick up a few more miles. It wasn't an epic ride, but it was great to get out of the house and on to the bike after several days of weather-imposed lock down.

Some of my BikeNerd friends have been comparing notes on trainers and rollers, but I'll settle for a few rides like this to get me through!
Ride your bike, avoid the bridges, and be safe. The thaw will come.
Posted by JBar at 5:55 PM