I was invited to sit in on a meeting of emergency responders and law enforcement agencies at Metroplan last week. The purpose of the meeting was to discuss the challenges of responding to emergencies along the Arkansas River Trail, and those challenges are many. Rob Stephens, Arkansas River Trail Task Force chairman, hosted the meeting along with Jim McKenzie, Judy Watts, and Lynn Bell of Metroplan.
Participants included representatives of Pinnacle Mountain State Park, North Little Rock Parks and Rec, MEMS, North Little Rock 911 Center, Conway Police Department, Maumelle Fire Department, and the Little Rock Fire Department. 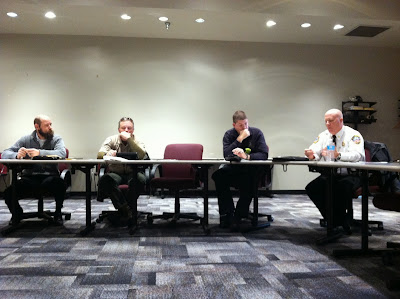 Emergencies along River Trail can represent unique problems for area first-responders. They are working to solve those problems.

The 88-mile Arkansas River Trail System includes not only the multi-use trail system, but also many miles of  open road covering several counties and multiple jurisdictions. A coordinated emergency response plan is vital, and this coordination is becoming increasingly important as more and more users enjoy the resource.

The most discussed problem was that of simply determining where the victim of an emergency is located. A 911 call from a land line will immediately provide the call center with the address from which the call is made, and even in the panic of an emergency situation, most people can give you their address or street location. This becomes more problematic on the ART where there are no addresses and many visitors cannot even say with certainty which side of the Arkansas River they are on, much less give a precise location.  Most cell phones have GPS capability, but I understood that the 911 system can only gain a vague idea of location from cell tower information, and that information can be misleading as signals may be switched from one tower location to another as traffic volume shifts.

Much of the discussion involved developing a system of precise location markings that could be accurately relayed by someone under duress. Several ideas were presented regarding the type of information that should be used, such as whether to use GPS or trail mile information. Frequency and type of signage was also discussed at some length.

I've made a 911 call from the River Trail and, though I know virtually every inch of the trail and can describe my location precisely to someone with the same experience, my description would likely not make a damn bit of sense for even a seasoned 911 operator.
I was at this meeting strictly as an observer, but the group of professionals involved were serious in their approach and very open to the give-and-take of sharing ideas and experiences with others. They are eager to improve response on the trail and that will be in the interest of all of us.
Posted by JBar at 9:38 PM