Most of the items coming out of the various committees and work groups are incremental; no major new announcements, but progress on many fronts.

Here are a few bits:

The resurfacing/redesign of South Main in Little Rock is underway. As you will recall, the project will reduce the number of traffic lanes, add bike lanes, and enhance the safe use of the area for cyclists and pedestrians. 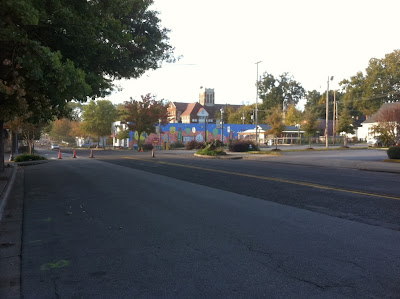 Traffic calming measures and better bike and pedestrian accommodations will make South Main a friendlier place to live and work.
North Little Rock Parks is working with IMBA to become a Destination Partner. After all, we have many miles of quality single-track right in town!

Ranger Ian Hope has brought a cyclist's insight to his job. Check out and like Explore The North Trails page on Facebook. Jeff Caplinger has done a very good job of keeping the community aware of issues affecting cyclist in the NLR Parks system. Ian carries that idea on and then some, as he is an active rider and regularly uses the trails.
A Park Ranger Ambassador program is being set up to recruit and train volunteers to inform and assist NLR Parks users.
A Levy Trail Planning Group has been formed for the Levy Spur Trail. A Neighborhood Group could be formed that could apply for grants and make suggestions on landscaping, security, maintenance, etc. The Levy Spur will eventually become a northern feeder to the River Trail.

North Little Rock continues to add bike racks at both public and private facilities around town. We've been taking advantage of one at Blue Yoga Nila on JFK. I'm primarily a recreational cyclist, but there is something especially rewarding about using the bike for transportation, and the City of NLR is helping to make cycling a practical alternative. 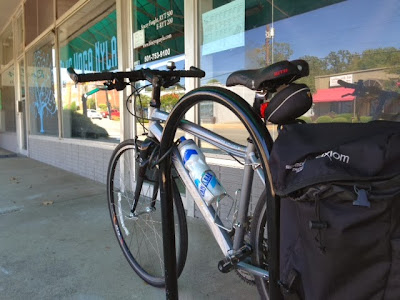 Diane Barton shared this photo of her bike locked to the rack at Blue Yoga Nyla on JFK. There's another rack at Andre's Coffee a few blocks south.
Willa Williams reported to the NLR Bike Friendly Community Committee that 11 new bike racks have been installed recently. They are distributed around the city, but there are two on JFK that we certainly will use.
Pulaski County is evaluating the possibility of extending bike lanes along Pinnacle Valley Road. Underground utilities would likely make this an expensive endeavor, but the fact that it is under study is progress.

Let's get together
Drivers who use Pinnacle Valley Road and Highway 300 complain loud and long about cyclists on the roadway, often expressing themselves by way of rude and dangerous behavior out on the road. I think that their pressure on Pulaski County judge Buddy Villines has taken away some of his appetite for continued development of bike infrastructure in the area.

In my opinion, that is all the more reason to move forward with efforts to expand shoulders or add bike lanes or routes. Riders and local drivers both have an interest in providing cyclists with alternatives that will allow them to get out of the busy traffic lanes. Rather than expressing their hostility and wishing we'd just go away, those drivers should join with cyclists to pressure the county to help us both. And then we'll all join hands and sing Kumbaya. In the meantime, riders can help by being aware of when they are holding up traffic and moving to the right. Aggressive drivers can help by slowing down to something near the posted speed and by passing safely as prescribed by state law.