Along The Trail: Colorful Foliage and Runners, Plentiful Pups, Cornbread

Time To Relax
I've determined that it is time to relax and just enjoy my rides for a couple of months. Unfortunately, not all of my ride partners have received that memo, but I have nonetheless enjoyed some laid back rides accented by beautiful weather, fabulous fall colors, and interaction with a lot of folks out enjoying the Arkansas River Trail and its surrounds.
It seems that we ran across some heady scene or an event at every turn on a recent Saturday.
It may be the only good thing about poison ivy...

While riding through Burns Park at the end of a loop past Two Rivers Park, my buddy and I were struck by the colors in a stand of cottonwoods along the trail near the soccer fields. 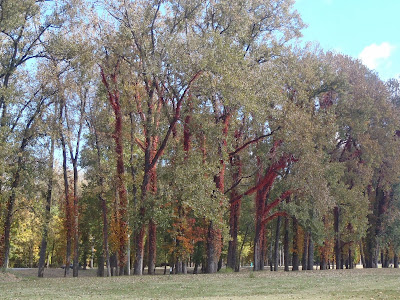 There was nothing special about the leaves of the trees themselves, but the invasive poison ivy and Virginia creeper draped the trunks and limbs in spectacular reds and yellows. 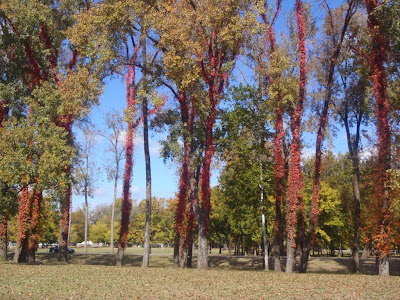 The reds were compliments of the Virginia creeper, while the poison ivy contributed  yellow and orange. 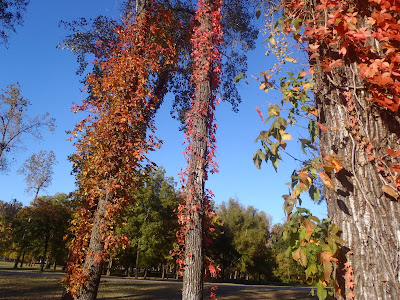 The brilliant blue sky made a perfect backdrop.
Painted (mostly) Ladies: Color Run 5K
For some reason, fall is also the season for some zany 5K's, including the recent Mud Run and last weekend's Color Run. 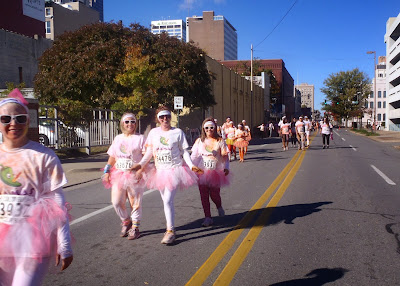 Tutus were the order of the day as runners were dowsed with powdered pigments at stations along the course. The result is a lot of human tie dye. You just never know what you'll see.....
Arkansas Times Cornbread Festival
Cornbread deserves to be celebrated and the Arkansas Times sponsored Cornbread festival saw a big turnout on South Main. 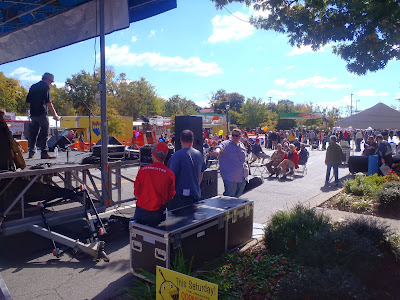 The lines were long to sample cornbread, but the weather was perfect and the music was good! I was on the outside looking in, so I didn't get to taste.
Diane and I crossed wires on our plans to attend the cornbread festival together and she was a little put out with me; though she was still generous enough to allow that I still make the best cornbread! We decided that it would be hard for me to make enough 6" cast iron skillet sized batches to feed the masses, so I won't be competing anywhere but at our house, where I am the champion. I owe my cornbread making prowess to Adrian Ledbetter of Fordyce, Arkansas, who generously shared her never-fail recipe with me many years ago.
Since she was kind enough to share, I will be, too. This is pretty much word-for-word as it was related to me by Mrs. Ledbetter:
"Heat your oven to 400. Put a little grease in a cast iron skillet and put it in the oven.
Take a cup of cornmeal. Add a teaspoon of baking powder, 1/2 teaspoon of baking soda, a teaspoon of salt, and blend it together. Add enough milk to make a batter. Stir in an egg. Some people add a little flour. I don't*.
Pour the batter in the hot skillet (it should bubble around the edges) and put it back in the oven for about 20 minutes or until it starts to get a little brown on top."
*I will confess that I have taken to adding a little flour...just a couple of tablespoons, maybe. I felt a little guilty about it at first, but figured Adrian wouldn't have given me the option if it was a sin.
I didn't write that down for many years, taking it as a point of pride that I could whip out consistently good cornbread without a written recipe and with a couple of ingredients added by instinct and experience rather than by measure, like any good southern cook.
Puppy Up!
I ran across this event at about this time last year, as I came upon a huge mass of folks with their dogs strolling out onto the the River Trail near Victory Lake in Burns Park.
As a result, I was a little more in tune when I saw the "Puppy Up!" signs in the park over the weekend. The event is to raise funds and awareness of cancer as it afflicts both dogs and people.
From their website:
2 Million Dogs was formed on the belief that if 2 dogs can walk 2000 miles to bring awareness to cancer surely 2 million dogs can walk 2 miles. Through The Puppy Up! Walk, we are building the largest pet and people cancer community in the world; from business people to artists to scientists and humanitarians, a partnership forged with the singular purpose of ridding the world of its deadliest disease.
- See more at: http://2013puppyuplr.kintera.org/faf/home/default.asp?ievent=1073096#sthash.9gV7Uo7l.dpuf 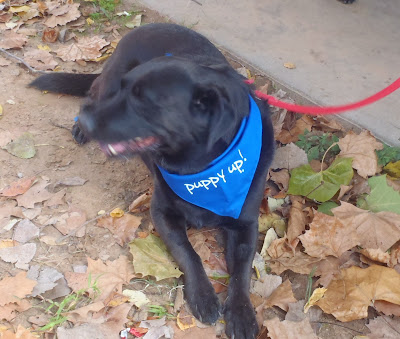 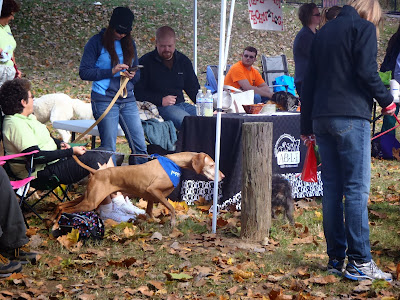 We are dog people, so I enjoyed mingling with this big pack of mixed mutts.
Fall is in the air, but it is still a very busy time along the trail. Slow down and enjoy it all!
Posted by JBar at 3:01 PM