Saddle Fit: How Do You Measure Up?

Road cyclists can be very particular about gear. Sure, some folks truly can't tell you the range of their cassette, what kind of wheels they're are riding, or whether they have a compact crank, but most serious riders are very much in tune with their bike.That knowledge is often accompanied by strong preferences, and few of those preferences exceed those associated with the saddle. New riders usually just ride whatever is on the bike, but long hours in the wrong saddle will drive most folks to find a better fit.

We touch our bikes with our hands, feet, and seat, and for all of those contact points, comfort is important. While we can easily change or even do without gloves, tighten or loosen shoes, or select different socks, once we've selected a saddle, it becomes a part of the bike. Gloves and shoes have long-standing sizing standards that allow us to measure our hands or feet and come up with a pretty sure bet when buying gloves or shoes, and what feels right in the local bike shop will likely be OK out on the road. This has not been the case with saddles. Many shops had a few loaners or our buddies might have something laying around that we could borrow, but it has been a trial-and-error endeavor. With quality saddles often in the $100-350.00 price range, buying the wrong saddle can be an expensive experiment, but the right saddle is worth pretty much whatever it costs.

Now, saddle makers have stepped up their game with some methods that at least smack of a scientific approach. The first saddle fit tool I was aware of came from Specialized. 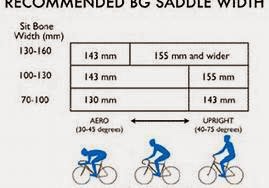 Specialized came up with a system in which you sat on a pad in order to make an impression of your sit bones.The resulting measurement gave you some direction as to which saddle would best  meet your needs.
Selle Italia has taken the process a step further with their idMatch saddle fit system. After hearing about this tool from a ride partner who had been saddle shopping, I dropped by Spokes to check it out. 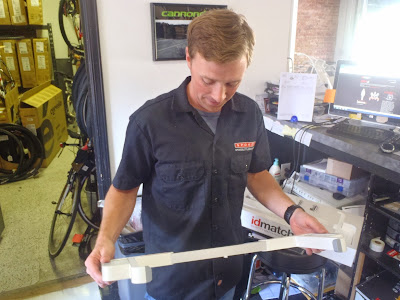 After getting some basic information like height, weight and age, Burke Jolly of Spokes used these calipers to measure the my pelvic width.
After measuring the width of my pelvis, Burke got a little more personal as he measured the circumference of my thighs just below the hips. He then used a pelvic inclinometer (no, that term was not previously in my vocabulary) to get a measure of my degree of flexibility. 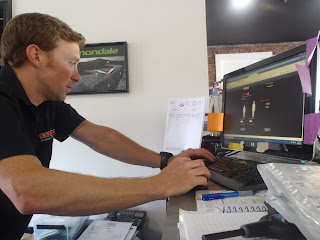 With the measuring done, Burke plugged my data into the software tool.
The results narrowed the range of my selections, though the process is still far from precise. The saddle that I have been riding for years, a Selle Italia Flite Genuine Gel, has the same width and similar dimensions some of the recommendations, so I have no doubt that it would have been on the list if it was still being offered. 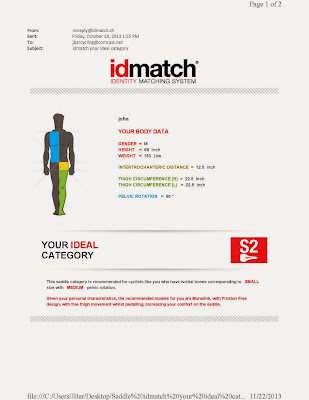 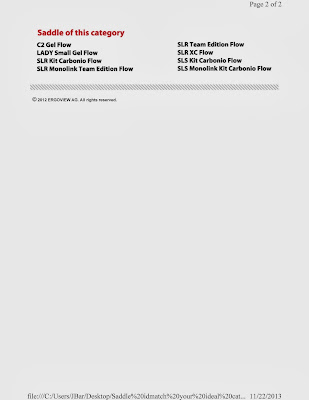 No, I'm not going for the Lady Gel Flow, but the idFit tool serves to narrow the range of options within the Selle Italia line. 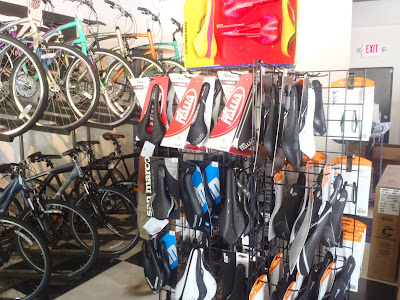 A key component of the Selle Italia idFit program is a demo kit so that after the fitting, cyclists can try out saddles within the recommended range before buying.
Fizik, another popular high quality saddle maker, also has a fit system called the Spine Concept. They classify  riders as  "snake", "bull", or "chameleon" based in large part on their degree of flexibility. Peter Sagan and Team Cannondale ride Fizik saddles and I spent part of my summer wondering why those guys had adopted such critter names.
The most frustrating thing about buying saddles for me has been that after going through the process of finding a saddle that worked well for me, when I attempt to replace it or to buy one for another bike, I find that the favored model has been discontinued or "improved". I had that experience with Selle San Marco before I settled on the Flite and it was again the case with the Selle Italia Flite Genuine Gel. After wearing one out, went to buy another and found it to be discontinued, so I tried an updated version. I rode the new Flite for a month or so before I gave it up and started searching on-line for some "old new" stock, Fortunately, I found a couple of the discontinued models on sale at a SF Bay area shop. I bought them both and would have bought a couple of more if they'd had them.

Saddles are a very personal choice and any discussion with knowledgeable riders or bike shop folks will likely end with , "...but you've just got to try some." Systems like idMatch and Spine Concept can help narrow your choices but, well, you'll just have to try some.
Posted by JBar at 7:34 PM

Thank you, Roger. I prefer a nice 8-grain to white bread.