Last Saturday was a beautiful August day for getting out on the road bike. It was sunny, virtually windless, and the temerature was pleasant by August in Arkansas standards. In addition to the fine conditions, I think that it has dawned on many  riders that the BDB100 that they signed up for a few months ago is now only weeks away and that the plan for a summer-long training regime faded to the point where they are now relegated to the Super High Intensity Training list. Saturday was also the day of the ALS Bike and Hike, which appeared to have been very successful.
As a result these many factors, the Arkansas River Trail and the roads west of town were alive with cyclists. I smile at the sight of so many riders out on the trails and roads, but not everyone finds such joy. Many drivers on Pinnacle Valley Road and Highway 300 resent sharing the road with cyclists and aggressively demonstrate their feelings in the form of high speed drive-bys, honking horns, and flying fingers.  Somebody bumped it up a notch on Saturday by scattering carpet tacks from Two Rivers Park to Highway 300. Some reports also put the tacks along the River Trail to near Two Rivers Bridge. 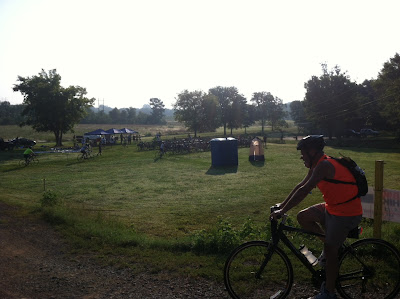 Based on the number of riders on the road and the number of bikes already at Pinnacle State Park, I would sat that the ALS Bike and Hike was a smash. Unfortunately for many, the trip included a flat repair.
The tacks did what they were intended to do and caused a bunch of flat tires, with many of the victims being participants in the ALS charity event. It is unfortunate that good-hearted people give their time, energy and money to help a worthy cause, only to to be targeted by some asshole. One rider reported having 3 flats!
There is no excuse for this kind of behavior. It is a nuisance, it costs money to replace tires or tubes, and a flat could easily cause a rider or motorcylcist to crash. Here's hoping that karma strikes hard against the person who did this. I've heard that acts vandalism often stem from deep-seated insecurities caused by having a tiny penis. I can't recall the authoritative publication in which I read that, but I believe it to be true.
Thanks go out to Pulaski County Judge Buddy Villines and Director of Public Works Sherman Smith. When they were informed about the tacks on the road, a sweeper was quickly dispatched to deal with the problem.
Let's Be Fair: Share the Damn Road! That Means Us.
We cyclists like to point to our right to be on the road. "Share The Road" is a nifty slogan, but it goes both ways. Some drivers simply do not believe that bikes belong on the road and nothing will alter their position. Most people don't have a problem in theory with sharing the road, but they want and deserve a little consideration.
A friend and fellow rider happened to be out on Hwy 300 Saturday on his motorcycle. He was behind a line of cars that was creeping along at 12 MPH as a couple on bikes rode two abreast, taking the lane and ignoring the cars behind them. There is no shoulder on most of 300, but there is no excuse for not moving over as far as practicable and going single file. Situations like that were taking place all too often. Large numbers of cyclists on the road can make us feel empowered, but the fact is that the more cyclists take to the road, the more we need to be sensitive to the drivers with whom we share the resource.

We need drivers on our side and it only takes a few interactions like the one above to turn a patient, cooperative driver into the horn honking fist-shaker that we are all too familiar with. Acknowledge cars that approach you out on the road and let them know that you're trying to work with them. For most people, that's enough to get you a full wave instead of the single-finger variety.
Posted by JBar at 8:47 PM

Good write up as usual. I got a couple of flats from those nails, I hope they catch whoever the life hating troll is that did it...The cyclist not getting over really touched home. If there's cars stuck behind you please move over single file. I've caught myself yelling "car back" at some of my fellow riders going the opposite direction...its painful to watch even as a cyclist...the other day not only 2 cars but me on my bicycle behind them were stuck behind 2 such riders going 12mph. If a car is tailgating you for more then a couple of minutes get over or just pull over and wave them by at the least.

another great write up! I like the "realness" of your posts. Always good to see you out there.

Thank you JBar... Too often cyclists exercise their rights to the road without acknowledging their responsibilities on the road. The two go hand-in-hand.