Every now and then, I just have to clean off my desktop.Things pile up that I found interesting or novel, but that would not make much of a topic on their own. The result is this!

Levy Spur- North Little Rock continues to add the the city's bike-pedestrian infrastructure, as funding has been obtained to extend paving of the Levy Spur north beyond 52nd Street. 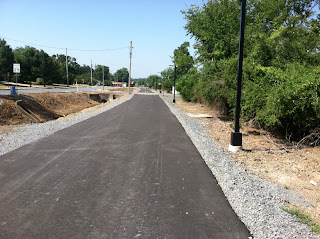 The Levy Spur will become an important link to the Arkansas River Trail.
﻿
As you may recall, the Levy Spur takes advantage of an abandoned rail spur that reaches from 33rd Street in the Levy area to Remount Road before entering Camp Robinson. Though there is a sketchy stretch on the bike route in the Pike Ave. area between 33rd Street and  Parker Street, the Levy Spur will eventually provide a safe route to the ART system for riders from Levy, Indian Hills and Sherwood.
I had occasion to use it recently as I came into town from Batesville  Pike heading for home in Park Hill. What a pleasure! In the past, riders either had to brave Camp Robinson Road through the heart of the Levy, with its many cross streets, fast food joints and driveways, or wind through disjointed back streets. Now, that is easily bypassed on the well-built and quiet spur. For those who use their bikes for more utilitarian missions, a bike rack has been installed on the route at Neighborhood Wine & Spirits.

Sundial- Pulaski County Judge Buddy Villines has proven himself to be a visionary in many ways, helping to build and hold together the coalition of county and city governments in the years-long effort that resulted in the Arkansas River Trail System and, particularly, the Big Dam Bridge and Two Rivers Parks Bridge. Part of his vision has been to making of Two Rivers Park into a destination to be enjoyed by strolling families, walkers, runners, riders, and nature lovers.
Over the last few months, we've watched the construction of a large mound in the heart of the park, which has had sidewalks, benches, and trees added to make the space a very attractive one. The elevation in the otherwise flat park makes it a unique vantage point. At its center, on the apex of the rise, is a sundial which is designed to use a standing person as its gnomon. The idea is a good one; however the execution seems to have been lacking. 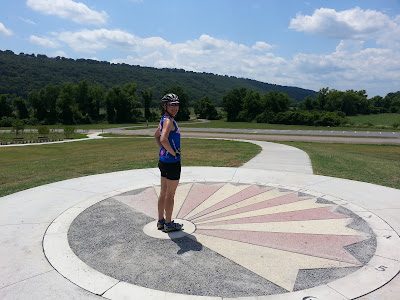 The Two Rivers Park Sundial seems to be missing the point. What time is it? It must have been break time for the guy with the instructions. Our gnomon model is none other than Mrs. JBar.

I've visited the site regularly during the course of construction and have remained mystified by the orientation of the time ring, as at no time that I visited was a shadow cast anywhere near a number that coincided with the time of day. Assuming I was missing something, I kept checking back, only to find that our sundial simply doesn't tell time, at least not here in the summer months. Oops.
Here is a link to Building a Sundial. Perhaps the fine folks with Pulaski County can use this 5000 year-old information to "set the clock".

Maumelle Trail- The City of Maumelle is also adding to its trail; system. A lane on Maumelle Blvd. from Arnold Palmer Dr. to Crystal Hill Road, eastbound, will be closed for the next few months for construction of a Bike-Ped path. I'm very glad to see this addition, as Maumelle Blvd. is not a comfortable route for cyclists.

Cossatot- OK, this has nothing to do with cycling, except that I skipped a day on the bike to enjoy a rare July day at the Cossatot River. Boaters have been roaming around the hills in pure joy as recent rains have made for some great unseasonable boating opportunities. That, and the fact that I was sent some cool photos of ME! 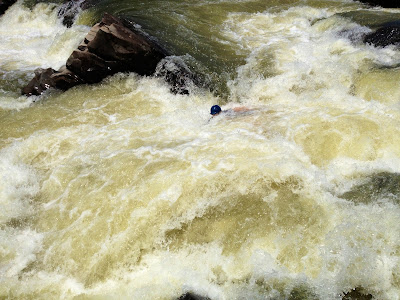 My little playboat disappeared into the seam at the bottom of the Washing Machine at Cossatot Falls on a recent Saturday. 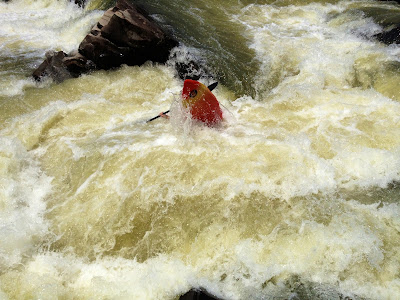 What goes down, must come up!
I don't get too many action shots of myself at play, as I'm usually on the back side of the camera, so I appreciate Jeremy Hayes forwarding these to me.

More recently, Kiplinger rated Little Rock as #1 in its 10 Great Places to Live feature, and cited the River Trail System as a key attraction. They know what many others know-- the Arkansas River Trail enhances lifestyles, provides for fitness and recreation, and attracts educated, employable young people to our city.
Alternative transportation infrastructure is not a waste of money to spoil the spandex pants crowd, but it is a prudent investment in the future prosperity and well-being of our community.

Arkansas also ranked high with our traffic laws, which generally demand that cyclists share the rights and responsibilities of road use. Granted, most laws regarding cycling date back many years to a time when automobiles were squeezing out bikes as a viable transportation mode. Those laws seem prudent, fair and downright enlightened as current-day cyclists strive to educate motorists that there is a place for cycling as transportation in our modern world.

Was the sundial off by an hour because of daylight saving time or was it off by more than an hour?

You can look at Diane's lunch hour shadow and judge for youreself. I got a Facebook comment that it was found to be accurate early one morning. I read enough to know that sundials require some calculation and compromise.
If sundials were easy, everybody would have one.

I guess after 6 is off quite a bit if it is lunch time.

I think that sundial is largely decorative... Human sundials - analemmatic, with a vertical gnomon - usually have different spots to stand depending on the month and an elliptical layout of the hours. I doubt very much that it would ever be all that accurate.

I guess that I'd better hang on to the old Timex.